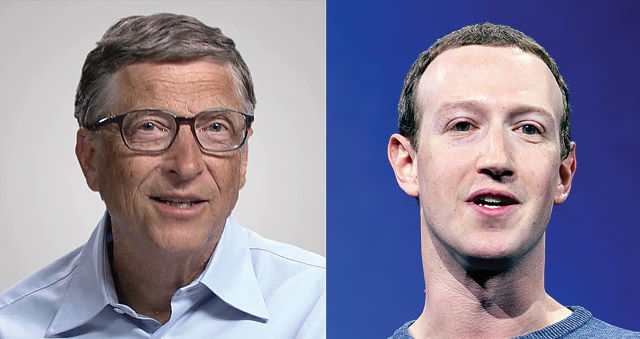 (Bill Gates and Mark Zuckerberg) Combined forces of global commerce, jet travel, and militant secularism make today’s elites like Jeff Bezos, Bill Gates, and Mark Zuckerberg, more akin to aircraft carriers than individuals. Is it any wonder that one strains to find genuine, unabashed patriots in their ranks?
by Hayden Ludwig

No single word better describes modern America’s liberal plutocrats than “cosmopolitan,” from κοσμοπολίτης (kosmopolites), literally “universal citizen.” We have the ancient Greeks to thank for the concept as well as the word. The first cosmopolitan was Diogenes, the first of the Cynics, ascetics who cast away their property and possessions to pursue a more virtuous life of the mind governed by reason and intellectual clarity in accord with nature. Diogenes may have hailed from the city of Sinope, but against the patchwork of city-states that peppered Greece he famously declared, “I am a citizen of the world.”

A greater affinity for humankind than individual humans is about the only thing our own “citizens of the world” have in common with the Cynics, however. The lives of modern America’s transnational liberal billionaires are about as far from spartan as one can get: The climate-conscious fly private jets and buy island mansions, famous socialists own multiple houses, and the biggest critics of income inequality leverage capital gains losses to pay little-to-no income tax.

America has always had its patricians, but as the word suggests, they saw themselves as patriotic “fathers” of their country, and their wealth and prestige were tied up in their country’s well-being. George Washington commanded armies. Thomas Jefferson was a statesman and diplomat. Robert Morris, probably America’s first millionaire, personally bankrolled the American Revolution.

Contrast that with the spacefaring Jeff Bezos, land-grabbing Bill Gates, or Big Brother–inspired tech billionaires Jack Dorsey and Mark Zuckerberg. The combined forces of global commerce, jet travel, and militant secularism make today’s elites more akin to aircraft carriers than individuals—travelling micro-states able to project power and influence anywhere in the world with wealth equivalent to a small nation’s GDP. Is it any wonder that one strains to find genuine, unabashed patriots in their ranks?

Nowhere is that clearer than in their “philanthropy,” humanitarian giving that is more political than charitable and utterly disconnected from its roots in Christianity’s love for one’s fellow man.

It isn’t only the Ford Foundation or George Soros’s Open Society Foundations, either. Across the nation, a host of community foundations—groups which are supposed to aid their local communities—serve as funnels for liberal billionaires to fund environmental activists, get-out-the-vote groups, litigation nonprofits, labor union fronts, mass immigration advocacy, and think tanks that support the kinds of socialist policies that would have made it impossible for entrepreneurs like Henry Ford, John D. Rockefeller, or Zuckerberg and Soros to succeed in the first place.

We’ve analyzed grants flowing from a few dozen community foundations to uncover $2.3 billion flowing to 110 highly politically active nonprofits on the Left since 2010. These groups range from top liberal think tanks, such as the Center for American Progress, to “animal rights” radicals demanding global population control. Far from merely supporting local philanthropy, America’s community foundations are some of the biggest conduits for activist groups we’ve discovered—yet they receive almost no scrutiny from the press.

That isn’t to say that these community foundations don’t fund bona fide charities, from local philharmonic orchestras to campaigns against child hunger and the Salvation Army. Nor does it suggest that there’s something inherently wrong with community foundations as a philanthropic vehicle.

What it does reveal is how thoroughly our country’s generous nonprofit sector has been hijacked by the Left. Charity has been weaponized. It’s less about doing what the government cannot (and should not) do and more of a tax-free political cudgel aimed at changing policies and even the outcome of elections.

What Are Community Foundations For?

According to the Council on Foundations, there are over 800 community foundations nationwide. They have a simple premise: Serve the local public, be it in a particular city (St. Louis), geographic region (Middle Tennessee), or an entire state (Oregon). They’re meant to fill a void between private foundations belonging to a wealthy individual or family such as the Ford Foundation and 501(c)(3) public charities supported by multiple donors, inviting donations from local philanthropists to fund an array of charitable causes.

Structurally, community foundations are 501(c)(3) public charities and almost universally centered on donor-advised funds (DAFs), a kind of charitable investment account meant to encourage small-dollar donors to give early and accumulate funds in a local philanthropy, before picking out the charities they ultimately wish to support. My colleague Michael Hartmann and I have written extensively about the advantages of and proposed reforms to DAFs.

The Cleveland Foundation is the world’s first community foundation, formed in 1914 by the banker Frederick Harris Goff. Goff, whose Cleveland Trust Company (now KeyBank) serviced fellow Clevelander John D. Rockefeller’s Standard Oil, was an innovator in philanthropy, envisioning a kind of vehicle that would prioritize the public good over self-interest. That led the Cleveland Foundation to launch a crusade against industrialized urban neglect, poverty, and corruption plaguing the city.

But it also had the unfortunate effect of involving it in the city’s 1967 mayoral race. Philanthropy expert William Schambra has recorded how the Cleveland Foundation—with help from the Ford Foundation—quietly funded a private media adviser and voter registration drives to boost election turnout for Democratic candidate Carl Stokes, who became the first black mayor of a major city by a scant 1,851 votes.

In civic participation there’s a fine line between partisan politics and philanthropy, and the Cleveland and Ford Foundations crossed it—so concluded Democratic members of the powerful U.S. House Ways and Means Committee. Big Philanthropy’s role in tilting an election directly led to potent nonprofit provisions in the 1969 Tax Reform Act passed by Democratic majorities in Congress and signed into law by President Richard Nixon. This law gave us the modern definition of a “private foundation” and strict limits on its electoral activities and lobbying.

Although community foundations escaped Congress’s wrath, the Cleveland affair lays bare their decades-long immersion in American politics, a trend that continues today. It leads this writer to ask: What are community foundations for? If the answer involves helping politicians of either party get elected, it’s time for Congress to go back to the drawing board.

In the next installment, see where community foundations sent their money.