Out of Darkness, Cash: Sixteen Thirty in Action 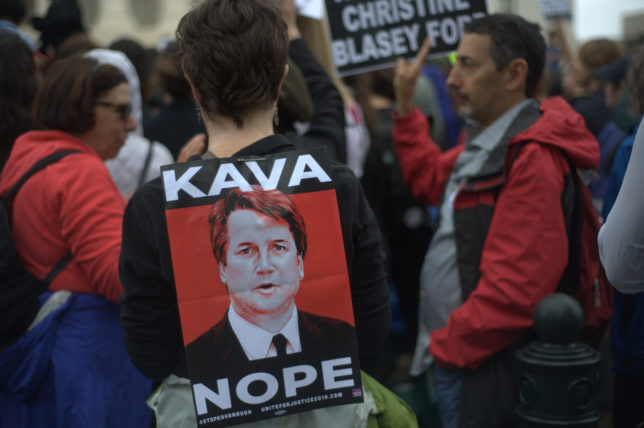 Arabella Advisors doesn’t like to advertise just how influential its Sixteen Thirty Fund really is. In 2015, for instance, the firm detailed the work of the Media Democracy Fund, a key funder of the Obama administration’s push for net neutrality regulations that year. The Media Democracy Fund is actually part of Arabella Advisors’ 501(c)(3) New Venture Fund and operates alongside an advocacy arm called the Media Democracy Action Fund. Left unmentioned is that the Action Fund itself isn’t a real organization—it’s a project of the adjacent Sixteen Thirty Fund, Arabella’s go-to advocacy group.

This kind of obfuscation is par for the course with Arabella Advisors, which often advertises the accomplishments and goals of one organization or another—either a group hosted by the New Venture Fund or a group hosted by the Sixteen Thirty Fund—but rarely both. One possible explanation is that the company wants to be viewed as prestigious philanthropy advisers and not as string-pulling schemers—or worse, grubby campaign hacks.

Regardless, that distance frees Arabella from playing electoral politics by shifting its political and lobbying agenda (and that of its clients) to its mega-nonprofits, most notably Sixteen Thirty Fund.

Nowhere is that better illustrated than with Demand Justice, the Fund’s judicial agitation group and an “AstroTurf” case-in-point. It was created in early 2018 to protest the Trump administration’s judicial nominees. Demand Justice presents itself as an independent group, unlinked to Arabella Advisors or the Sixteen Thirty Fund. CRC first reported on the group in July, before it earned national prominence, later identifying it as a project of the Sixteen Thirty Fund.

Following the June 2018 announcement of Justice Anthony Kennedy’s retirement from the Supreme Court, Demand Justice sprang into action. It organized protests outside the Court with professional activists from the Center for American Progress Action Fund, Alliance for Justice, and the Service Employees International Union (SEIU). As CRC noted at the time, the supposedly “spontaneous” protesters were prepared to “resist” anyone that Trump nominated to Kennedy’s seat—even before their name was announced. Protesters sported glossy signs reading “Stop Kavanaugh,” “Stop Barrett,” “Stop Kethledge,” and “Stop Hardiman,” pre-printed propaganda created in the event that President Trump nominated judges Brett Kavanaugh, Amy Coney Barrett, Raymond Kethledge, or Thomas Hardiman from his shortlist of Supreme Court nominees.

Arabella Advisors said nothing after President Trump nominated Judge Brett Kavanaugh. It remained quiet throughout Kavanaugh’s confirmation process and in the run up to 2018 midterm elections. The Sixteen Thirty Fund (under the guise of Demand Justice) was anything but mum, though, railing against Kavanaugh and spending nearly $317,000 in electioneering communications to support vulnerable Democratic Senators and attack vulnerable Republican Senate candidates.

The Demand Justice campaign, however, pales in comparison to the Sixteen Thirty Fund’s latest endeavor: defending Obamacare from efforts to undo it by legislation or litigation. CRC has exposed no fewer than thirteen pro-Obamacare organizations that aren’t really organizations at all, but fronts for Arabella-run Funds.

President Obama’s signature 2010 healthcare law was threatened by President Trump’s 2017 tax reform law, which undercut its individual mandate to buy health insurance. Faced with the subsequent collapse of Obamacare, left-wing activists have rushed to stop efforts to repeal the law as well as a Texas federal judge’s ruling that Obamacare is unconstitutional without the individual mandate.

Much of that activism has been led by the Sixteen Thirty Fund. The group created multiple websites and state-level “front groups” pushing the same pro-Obamacare talking points, effectively cloning a single healthcare argument. These “pop-up” groups were made to look like standalone entities, obscuring the tight connection between each other and the Sixteen Thirty Fund. It’s a vast campaign run by professional activists through the nonprofit infrastructure established by Arabella Advisors.

In December, CRC identified one such group: Protect Our Care, an enigmatic campaign that savaged Republican politicians ahead of the 2018 midterm election for supposedly “dismantling Medicare” and Obamacare. “Republicans’ war on healthcare has turned into a political liability for them,” it confidently asserted in May.

Protect Our Care has called itself a “dedicated war room for the ACA [Obamacare]” and a heroic defender of “affordable coverage for all Americans,” but it might be better labeled the Obamacare campaign 2.0. Take Brad Woodhouse, the group’s executive director. “Ultimately,” Woodhouse claimed, “Americans don’t support or trust the GOP when it comes to healthcare.”

He’s been making that claim for over a decade. Woodhouse was part of the steering committee for Health Care for America Now (HCAN), the 501(c)(4) group that helped pass Obamacare with the help of MoveOn.org, the AFL-CIO, Obama for America (later renamed Organizing for Action), and the now-defunct Association of Community Organizations for Reform Now (ACORN). From 2008 to 2013, HCAN ran a $60 million national campaign to ram the healthcare bill through the Democratic-controlled Congress in March 2010 and then to protect it before the law took full effect in 2014. (Most of that funding, $47.2 million, was spent between 2008 and 2010.)

A full $27 million of HCAN’s war chest came from Atlantic Philanthropies, a Bermuda-based foundation whose website still brags about its “sizeable investment” in HCAN—in fact, one of the largest grants in history for advocacy, according to then-foundation President Gara LaMarche.

This may seem strange to say in the context of a national advocacy campaign that raised more than $47 million, ($27 million came from The Atlantic Philanthropies, $6 million from other foundations, approximately $9 million from organizational partners, and the remaining $6 million from individual fundraising.) HCAN did attempt to aggressively fundraise. Still the general consensus is that HCAN could have done a better job soliciting additional resources—especially from organizations, other foundations, and individual donors.

It was also the perfect “dark money” scheme. Because Atlantic Philanthropies isn’t based in the U.S., it doesn’t file the same public documents with the IRS that would reveal its grants, as U.S.-based foundations are required to do. As CRC President Scott Walter pointed out, even the foundation’s very existence was kept secret for 15 years, allowing Atlantic Philanthropies “to pour hundreds of millions of offshore dollars into American [501(c)(4) groups], with never a peep of criticism from the usual quarters, then or now.”

HCAN dissolved in December 2013, with national campaign manager Richard Kirsch declaring victory in the pages of the Washington Post, but the group was far from finished.

In January, CRC discovered that HCAN has been revived as a project of the Sixteen Thirty Fund. A slideshow created by Arabella Advisors (and spotted on a grantmaking committee’s website) detailed the new arrangement between the firm and the “zombie” HCAN. While the main advocacy group would operate as part of the Sixteen Thirty Fund to “mobilize constituency field operations to push back against regressive legislation” (e.g., anti-Obamacare bills), the HCAN Education Fund—formerly part of the liberal Tides Center—would conduct “capacity building and education field work [to reach] over 1.8 million people . . . in over 30 states.” Further greasing the wheels was Arabella’s contract with BerlinRosen, a Democratic communications strategy firm best known for propelling Bill de Blasio into the New York mayor’s office and coordinating the SEIU’s Fight for $15 minimum wage campaign. 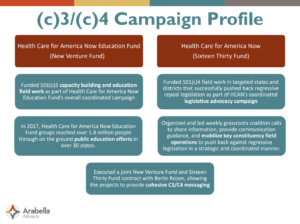 Arabella Advisors’ presentation on how (c)(3) and (c) (4) organizations can work together.

Among the myriad groups trying to prop up the drooping healthcare law is Get America Covered, which was formed in late 2017 by two Obama administration alumni, Lori Lodes and Josh Peck, both of whom served in the Centers for Medicare & Medicaid Services. (Lodes is also personally connected to Protect Our Care, having served as its campaign manager prior to forming Get America Covered.)

In 2016, Lodes served as chief of staff for communications in Hillary Clinton’s presidential campaign; prior to that, she was a senior vice president for the Center for American Progress (CAP) and its advocacy arm, CAP Action, as well as deputy communications director for the SEIU. From 2016 to 2017, Peck had the unfortunate position of chief marketing officer for HealthCare.gov, the Obamacare sign-up website launched in October 2013 with so many technical issues it earned the nickname “Nightmare.gov.” Peck also worked for the Democratic National Committee and Obama’s 2008 campaign, and he runs his own consultancy—For Good Strategies—which has catered to left-wing groups like Planned Parenthood, NARAL, and the Citizen Engagement Laboratory.

Get America Covered is a good illustration of how Arabella hides its connections to these interlaced Obamacare defense groups. A web search for Get America Covered will reveal a lot about what Lodes and Peck want to advertise—that they’re former Obama administration officials pushing Obamacare enrollment, and that their national co-chair list reads like a grab bag of (mostly) glamor activists: Democratic operative Van Jones, Bipartisan Policy Center senior adviser Andy Slavitt, former insurance CEO Mario Molina, and actors Alyssa Milano and Bradley Whitford (of The West Wing TV show).

A glance at GetAmericaCovered.org from November 1, 2017 reveals a “Donate” button that has since been deleted as well as a privacy policy that can no longer be accessed. The former linked to the group’s page on the website of ActBlue, a major fundraising platform for liberal nonprofits. ActBlue’s website reports that it no longer fundraises for Get America Covered, but the webpage’s source code suggests the organization once used the services of ActBlue Charities, the arm that services tax-deductible 501(c)(3) nonprofits. A web search further reveals a webpage on the fundraising platform DonationPay.org entitled “Get America Covered | Hopewell Fund.” Although that page no longer exists, the WayBack Machine shows that it was live in January 2018, while the grantee group listed in the page’s source code implies it is sponsored by the Hopewell Fund—one of the four Funds operated by Arabella Advisors.

For reference, another webpage on DonationPay.org—this one live—entitled “Armada | Hopewell Fund” shows the same pattern: no reference to the Hopewell Fund on the page, but the same relationship to the Fund listed in the source code. 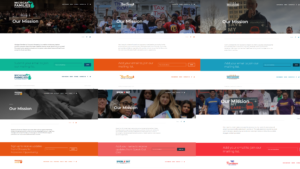 A sample of the websites used by projects fiscally sponsored by the Sixteen Thirty Fund.

Yet another pro-Obamacare group and Sixteen Thirty Fund project, Health Care Voter, is even more deceptive. Besides including Brad Woodhouse as a co-chair (from Protect Our Care), Health Care Voter lists a few dozen coalition members—at least nine of which are also projects of an Arabella-run Fund: Tax March, Save My Care, Ohioans for Economic Opportunity, New Jersey for a Better Future, Michigan Families for Economic Prosperity, SoCal Health Care Coalition, Keep Iowa Healthy, Keep Birth Control Copay Free, and .

In fact, many of these groups—including other ostensibly state-based groups not on the coalition list—are so similar that they share carbon copy websites.

Pulling back the curtain on the Sixteen Thirty Fund reveals an impressive network of some 45 activist groups run through this “dark money” giant. The real puppeteer, though, is Arabella Advisors, which has managed to largely conceal its role in coordinating so much of the professional Left’s infrastructure under so-called “philanthropy.”

Arabella Advisors may advertise its “strategic philanthropy” services, but the company and the Sixteen Thirty Fund should be seen for what they really are: left-wing activists playing professional politics.