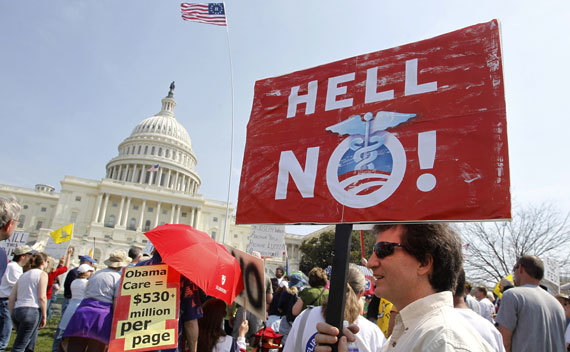 Following a Texas federal judge’s December 14th ruling that Obamacare is unconstitutional, it appears that the the 2010 healthcare law may make its way back to the U.S. Supreme Court.

One of the groups to emerge from the fight over the fate of the Democratic Party’s 2010 healthcare overhaul is Protect Our Care, a mysterious campaign that attacked Republican politicians ahead of the 2018 midterm election for “dismantling Medicare” and Obamacare. “Republicans’ war on healthcare has turned into a political liability for them,” the group confidently asserted. And “ultimately,” Executive Director Brad Woodhouse wrote in May, “Americans don’t support or trust the GOP when it comes to healthcare.”

Protect Our Care has called itself a “dedicated war room for the ACA [Obamacare],” and the description fits. The group also casts itself as a heroic defender of “affordable coverage for all Americans,” but it might be better labeled the Obamacare campaign 2.0.

The organization’s connections to the Obama administration and the professional Left are striking. Executive Director Brad Woodhouse served on the steering committee for Health Care for America Now (HCAN), the 501(c)(4) group that helped pass the healthcare law with the help of MoveOn.org, the AFL-CIO, Organizing for Action, the now-defunct Association of Community Organizations for Reform Now (ACORN), and tens of millions of dollars from Atlantic Philanthropies—a Bermuda-based foundation that doesn’t file tax returns in the United States. As Matthew Vadum wrote in May, the passage of Obamacare in 2010 was “‘the culmination of a campaign’ by Atlantic Philanthropies and its allies.”

His last gig was as president of Americans United for Change (AUFC), a 501(c)(4) group described by the left-leaning Sunlight Foundation as a “dark money group” (meaning it isn’t required to disclose its donors). AUFC was the centerpiece of an expose by the conservative group Project Veritas in October 2016, which caught a top AUFC staffer, Scott Foval, claiming his organization paid mentally ill people to pick fights at Trump campaign rallies. (Foval was fired almost immediately after the video was released.)

Protect Our Care itself could be described as a “dark money” outfit, since it’s a front for the 501(c)(4) mega-funder Sixteen Thirty Fund. Sixteen Thirty Fund itself keeps a low profile, but its handiwork makes waves throughout American politics. It runs a host of “Potemkin village” websites designed to look like single-issue grassroots organizations—such as the judicial advocacy group Demand Justice, the anti-Trump Tax March, and Not One Penny, which opposes the Republican tax reform bill passed last year.

In reality, many of the 18 or so organizations the Fund operates go to great lengths to avoid admitting that they’re facades for a group with revenues exceeding $21 million in 2016—including Protect Our Care, a website that doesn’t contain a single reference to the Sixteen Thirty Fund.

The rest of Protect Our Care’s staff—also unpublished but found via their LinkedIn profiles—reveals the group’s close proximity to Obama administration alumni, Hillary Clinton’s 2016 presidential campaign, and top-tier influencers on the Left.

Protect Our Care’s campaign chair (and Woodhouse’s predecessor) is Leslie Dach, a former Clinton administration aide and Walmart executive who served as a senior adviser to the Hillary campaign. Dach was reportedly “installed” in the campaign by campaign chair John Podesta and was responsible for inviting former Reagan speechwriter and Never Trump Republican Doug Elmets to speak at the 2016 Democratic National Convention.

Protect Our Care campaign manager Lori Lodes served as chief of staff for communications in the Clinton campaign. Before that, Lodes worked as a senior vice president for the Left’s top think tank, Center for American Progress (CAP), its advocacy arm (CAP Action), and the Service Employees International Union (SEIU).

Adam Hoyer, Protect Our Care’s organizing director, worked under Woodhouse in 2016 as national field director for Americans United for Change. In 2016, Hoyer concurrently worked as director of field campaigns for Smoot Tewes Group (STG), a Democratic consultancy whose client list includes Protect Our Care. According to STG’s website, the firm’s campaign “to prevent the repeal of the ACA [Obamacare]” involved placing over 126 op-eds, 1,450 news clips, and holding some 1,900 events in 11 states “with Republican Senators considered ‘moveable’ on the issue of healthcare.” The firm bragged:

At the end of July, after months of working on these Senate targets, Senators John McCain (R-AZ), Susan Collins (R-ME), and Lisa Murkowski (R-AK) – all in states where we were heavily active – bucked their party and voted against repeal of the ACA, killing the bill. In September, a revamped health care repeal bill was once again on the table. We generated massive in-state pressure on Senators to declare their opposition, and a vote on the bill was pulled at the last minute because of lack of support [emphasis added]. 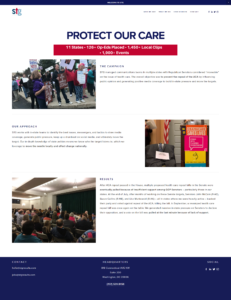 Protect Our Care is not the only group on the Left organizing around Obamacare, but its connections certainly make the group stand out from the crowd. That defense is a product of top-shelf professional activists and senior influencers in the Democratic Party. A similar venture launched in early 2017, the Alliance for Healthcare Security, was largely funded by the SEIU—though the union did not disclose how much it paid for the Alliance’s pro-Obamacare advertisements.

But if the fight to preserve Obamacare in 2019 looks anything like the fight to pass it in 2009-2010, expect the usual funders to pony up hefty sums. Health Care for America Now reportedly spent $48 million between July 2008 and March 2010 to pass the legislation through a Democratic-controlled House and Senate—40 percent of which went to advertising.

Protect Our Care may fairly claim it’s “leading the fight” to save Obamacare, but if there’s one thing this dark money group won’t be able to claim, it’s transparency.