Nonprofits and Politics in The Argument: Revolt of the Activists 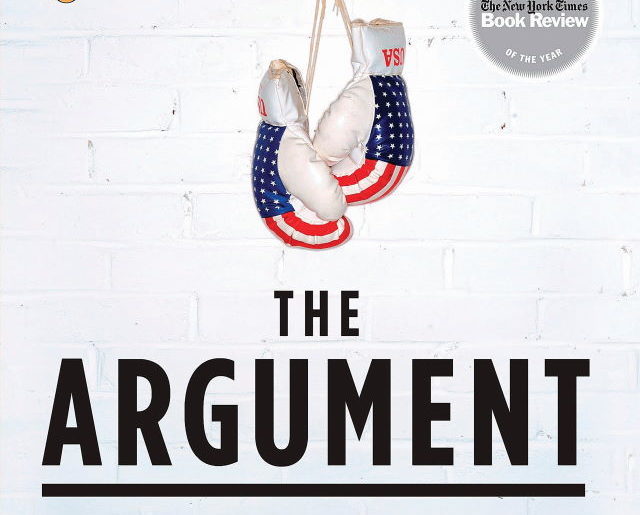 Revolt of the Activists

The Capital Research Center (CRC) specializes in investigating how left-of-center nonprofits impact American public policy and how such groups are funded. Independent nonpartisan nonprofits can greatly influence issues that affect electoral outcomes, even without directly involving themselves in partisan politics.

CRC has published reports analyzing different categories of political spending over past election cycles, finding that aggregate revenues of selected liberal and conservative public policy 501(c)(3) nonprofits have increased since the 2006 cycle. Those increases were especially significant on the left, and CRC has traced multiple threads of this phenomenon back to roughly the 2004 cycle when President George W. Bush was reelected despite unprecedented Democratic efforts at making him a one-term president.

A firsthand account of the multifront internecine conflict between the Democratic Party’s grassroots and establishment that characterized this era was published by journalist Matt Bai in 2007 as The Argument: Inside the Battle to Remake Democratic Politics. The book has many interesting takeaways—it’s a well-written, entertaining read—but one takeaway that may not have been fully appreciated at the time of its publication was its glimpse into a nascent swell of politically motivated funding that was beginning to be directed toward independent left-leaning nonprofits. 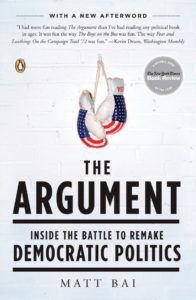 A firsthand account of the multifront internecine conflict between the Democratic Party’s grassroots and establishment that characterized this era was published by journalist Matt Bai in 2007 as The Argument: Inside the Battle to Remake Democratic Politics. Credit: Amazon. License: https://amzn.to/3jBzrB5.

The events chronicled in The Argument largely take place between 2004 and 2006—an era before the Obama presidency that admittedly feels like a lifetime ago in American politics. For the newest soon-to-be voters in the 2022 cycle, the 2004 election was a lifetime ago.

The soul-searching and finger-pointing among Democrats in the shadow of that election are a dominant theme of the book. Outsider “progressives” (a term Bai notes was being intentionally employed because the word “liberal” invoked negative connotations among the public) were agitating against what they saw as a Democratic establishment dominated by Clintonian centrism and the machinations of Washington insiders. These activists were geographically diffuse, keen to adopt new methods of organizing and fundraising, and more assertively left-wing (they would say “progressive”) than many in their party’s leadership.

Much of the book’s narrative focuses on these activists and the ways that prominent Democratic politicians of various ideological dispositions interacted with them. The Argument explores the rise of MoveOn, “the group that embodied the liberal backlash against the democratic ethos of the booming 90s” and that heralded the end of “the days when political parties held a monopoly on organizing their constituents.”

Bai also had a firsthand look at another form of online activism: the “netroots” blogging world represented by Daily Kos and the politicians like Howard Dean and Ned Lamont who attracted that world’s left-wing anti-establishment views. All told, the book is an intriguing snapshot of a particularly contentious period of Democratic politics just before the ascendency of Barack Obama, who makes several appearances toward the end.

Fifteen years of political hindsight, combined with the author’s first-person perspective, make The Argument effectively a primary source history for readers in 2021. As such works age, their value increasingly lies as much in explaining subsequent trends and observations as in simply chronicling past events. Today’s readers can easily draw threads and parallels from the tribulations of the mid-2000s Democratic Party right through the presidential campaigns of Barack Obama, Hillary Clinton, Bernie Sanders, and Donald Trump, alongside many other political developments.

Among the more interesting threads spun from the book’s pages is the burgeoning influence of independent public policy nonprofits on the American political landscape. For The Argument, Bai had a unique insight into the development and early history of what would become one of the most important funding networks driving this development, at least on the left: the Democracy Alliance. 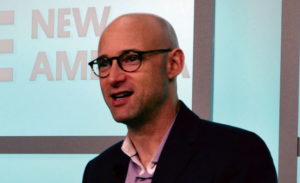 “The donors had had enough,” Matt Bai writes, of giving money “to Democratic Party committees or to groups like the Sierra Club and Emily’s List,” watching Democrats lose and then having “all the same people . . . back six months later, asking for more checks.” Credit: New America. License: https://bit.ly/3C49124.

In the next installment, the Democracy Alliance focuses on winning elections.