The Argument: Democracy Alliance Is Born 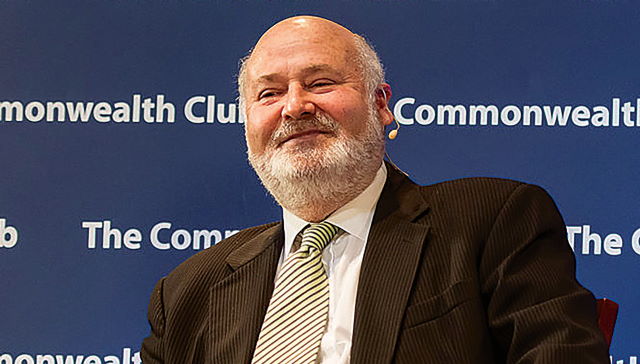 Hollywood’s Rob Reiner summed up the basic frustration in an interview with Bai. He had given Democrats millions of dollars over the years, but felt he had very little to show for it: “[H]e had watched as the party found itself continually rolled by Republicans and beaten at the polls.” Credit: Commonwealth Club. License: https://bit.ly/3vzTxQU.
by Robert Stilson

Today, the Democracy Alliance bills itself as “a preeminent network of donors dedicated to building the progressive movement in the United States.” Individual alliance members, known as “partners,” are expected to commit at least $200,000 annually to groups recommended and approved by the alliance, while institutional members like labor unions are expected to contribute at least $1 million. It is important to understand that the Democracy Alliance largely functions to coordinate and channel contributions from partners directly to these groups, rather than operating as a grantmaker itself. Scholars have described it as “a kind of progressive investment marketplace.”

As of September 2021, the alliance’s website listed 30 “high-impact, progressive organizations” that it recommends to partners as part of its core investment portfolio. It also provided a partially overlapping list of 60 groups engaged in “defending democratic values, institutions, and norms” and maintains three State POWER Funds that “address the long-term needs of progressive organizations at the state and local level.” In past years, the alliance has also approved secondary lists of dozens of additional groups for partner funding as part of a “progressive infrastructure map.”

Of the 30 groups in the alliance’s main portfolio—what it calls “the core of DA’s work”—almost all are nonprofits. More than half are 501(c)(3)s, while most of the remainder are 501(c)(4)s. Many listed groups, however, maintain connected—though legally separate—affiliates with different tax statuses. For example, the 501(c)(3) Center for American Progress is affiliated with the 501(c)(4) Center for American Progress Action Fund. On its website, the Democracy Alliance typically links to whichever entity is generally considered to be the primary organizational arm.

It is perhaps not intuitive that what has grown to become one of the most influential political funding networks on the American left principally recommends that its partners give to nonprofits—particularly to 501(c)(3)s. Reasons probably include the fact that federal campaign contributions are capped and that an individual’s gift to such nonprofits need not be publicly disclosed. In the case of 501(c)(3) groups, contributions are tax-deductible. Serious money is involved: According to The Washington Free Beacon, confidential documents from 2019 revealed that “the Democracy Alliance’s partners have infused $1.83 billion into the left since its inception.”

That “inception” is what Bai chronicles in The Argument, and it points to another explanation for the alliance’s focus on funding nonprofits: Wealthy individuals were simply looking for effective ways to deploy their wealth in order to achieve the liberal political outcomes that they desired. One lesson many of these donors took from Republican victories in the 2004 elections was that the methods they had been using simply were not working.

In that campaign, for example, billionaires George Soros and Peter Lewis each gave upward of $20 million to the political action committee America Coming Together (ACT) and a related group called the Media Fund. Bai notes that ACT’s “army of door knockers” and its “database of Democratic voters” had set up, “for the first time ever, an alternative structure to the Democratic Party’s voter turnout machine.” He writes that Soros “had spent almost $30 million of his own fortune to unseat the president” and “[i]n all of American history, no small group of partisans had ever invested so much money to win a single campaign.”

When Bush ultimately prevailed (and in truth, even before the election), there was significant consternation among the Left’s moneyed interests. “The donors had had enough,” Bai writes, of giving money “to Democratic Party committees or to groups like the Sierra Club and Emily’s [sic] List,” watching Democrats lose and then having “all the same people . . . back six months later, asking for more checks.” Wealthy donors were tired of “being treated like an ATM with arms and legs.” They were ready to try something new, especially in the aftermath of an “election that had left them feeling confused and deflated.”

Hollywood’s Rob Reiner summed up the basic frustration in an interview with Bai. He had given Democrats millions of dollars over the years, but felt he had very little to show for it: “[H]e had watched as the party found itself continually rolled by Republicans and beaten at the polls.” Reiner’s millions simply had not had the impact he wanted on the nation’s politics. Bai noted what he called a “curious irony”:

The strange truth was that the zillionaires who responded to Rob’s slide show had come to see themselves, however improbably, as the oppressed. They knew they were right about what was best for the country, and if the voters didn’t see that as clearly as they did, then it could only be explained by some nefarious conservative plot. They imagined themselves to be victimized and powerless, kept down, somehow, by the Man.

“Rob’s slide show” refers not to Rob Reiner (though it did make an impression on him), but to the PowerPoint presentation created by attorney and political operative Rob Stein that is generally credited with sowing the seeds of what would ultimately become the Democracy Alliance. As recounted in The Argument, the slide show detailed Stein’s research on how a relatively small number of right-of-center funders had created the “infrastructure” underlying modern conservatism, largely by giving money to independent think tanks and advocacy groups—nonprofits—which had in turn developed and messaged the policy ideas that had gradually shifted America’s electorate to the right.

Stein’s position was that Democrats were losing elections because they lacked anything comparable. To win, they needed to invest in long-term liberalism by bankrolling the independent policy groups that could develop and promote their ideological agenda for them. He had been pitching this idea to donors since 2003 and had begun to attract some serious attention, but Republican victories in the 2004 elections were what really brought a sense of immediacy to the project.

In the next installment, note that the Democracy Alliance has maintained a consistent focus on elections despite partners’ preference for long-term objectives.