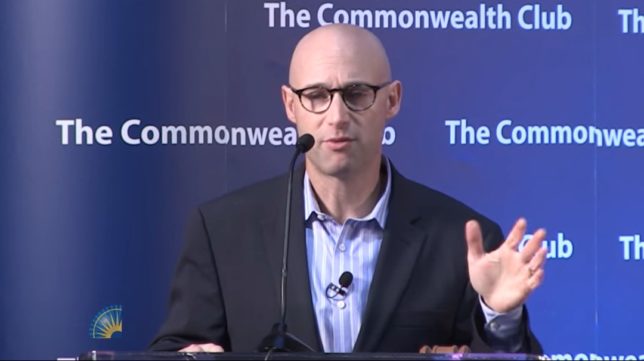 “The donors had had enough,” Matt Bai writes, of giving money “to Democratic Party committees or to groups like the Sierra Club and Emily’s [sic] List,” watching Democrats lose and then having “all the same people . . . back six months later, asking for more checks.” Credit: YouTube.
by Robert Stilson

The first official gathering of the Democracy Alliance occurred five months after Bush’s reelection, in April 2005. By the second conference six months later, alliance partners had pledged $39 million to the first round of recommended groups, with George Soros alone accounting for more than a quarter of that and Peter Lewis serving as another major funder. The Service Employees International Union (SEIU)—which Bai notes was “a major source of cash and manpower for Democratic campaigns”—would soon become the alliance’s first institutional partner, largely through the efforts of its then-President Andy Stern. The SEIU would commit more than $5 million to the network by the spring of 2006 and even housed the alliance’s offices at its headquarters in Washington, DC.

A tension ran through the Democracy Alliance from the beginning, though. It related to two distinct goals that Bai observed the donors “liked to pretend” were the same, but were not: “winning back control of Congress, on the one hand, and overhauling the party, on the other.” A survey of the more than 50 partners who attended the first official conference revealed that 86 percent felt the alliance should focus on long-term objectives, rather than seek short-term results. No doubt the partners held this view sincerely—it was in accordance with Stein’s original vision for the alliance.

However, when it came time to award the first round of funding to recommended organizations, Bai noted that the 10 groups selected were “focused overwhelmingly on the machinery of elections rather than the substance behind them.” John Podesta and David Brock were promised “a minimum of $9 million and $7 million, respectively, over two years”—presumably referring to their respective nonprofits: the Center for American Progress and Media Matters for America. Other early alliance-funded nonprofits included the Economic Policy Institute and the Center on Budget and Policy Priorities.

By the spring of 2006, at the alliance’s next conference in Austin, Texas, 18 more groups were approved for funding. They included EMILY’s List, the Sierra Club, People for the American Way, ACORN, and the New Democrat Network. All except EMILY’s List were 501(c)(4) nonprofits. The partners also wrote checks to 501(c)(3) groups “that were supposed to help progressives appeal to religious voters,” like Sojourners and the Gamaliel Foundation. According to Bai, “all [the partners] could think about was funding any group that seemed to have a strategy to deliver the House and the Senate.” Stein’s original long-term vision, he wrote, had been “replaced by an explosion of smaller, single-year grants to many of the same well-funded groups that had been part of the [Democratic] party’s election machine for decades.”

This is an important point. Although a major part of the Democracy Alliance’s mission is to foster “the infrastructure necessary to advance a progressive agenda for America,” it has always maintained a clear and simultaneous focus on electoral cycles and partisan politics. The Argument relates that, even early on, many alliance partners “were in no frame of mind to push short-term, electoral considerations into the background. Their main goal was to rid the country of conservative majorities, preferably in the next election.” This makes sense: It was the Bush presidency generally—and the war in Iraq specifically—more than anything else that galvanized many of the alliance’s original partners. Indeed, alliance partners had contributed more than $100 million by the start of the 2008 primary season, and “most of that money was focused in some way on winning back the White House.”

This focus on elections has remained consistent. Internal documents from 2019 boasted that “electoral victories from 2006 to 2018 bear the stamp of these coordinated investments made by DA Partners.” Democracy Alliance president Gara LaMarche wrote prior to the 2016 election that turnout among the “new American majority”—which he defines as non-whites, young people, women, and “progressive white voters”—was the “one sure path to a progressive victory” over Donald Trump. The next year, after Trump’s victory, the alliance launched its New American Majority Fund to finance efforts to “implement successful voter mobilization campaigns; help elect progressive candidates; and pass progressive policy changes at the state level.”

“The translation of a burgeoning resistance movement into electoral strength” was a “key theme” of the fall 2017 alliance conference. That was “what the Democracy Alliance and its allies are working and hoping for.” In 2020, LaMarche wrote, “We are going all out for victory” to “boot Donald Trump and his enablers from Washington.” He asked readers to “ratchet up your electoral activities—giving money, making calls and sending texts, registering voters, turning out the vote and working at the polls.” All of these “electoral activities” can, of course, be performed by independent nonprofit groups like those recommended by the Democracy Alliance.

In the next installment, see the role that nonprofits play in the Democracy Alliance’s plans.