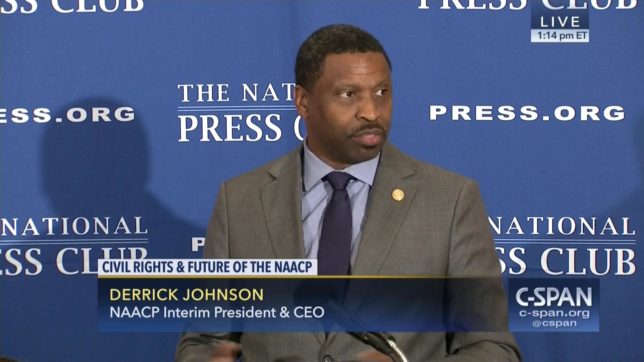 NAACP President Derrick Johnson. A lawyer by training, has been involved in political activism and academia almost his entire adult life. Credit: C-SPAN.
by David Hogberg

NAACP President Derrick Johnson sent an open letter to National Football League (NFL) Commissioner Roger Goodell addressing the fact that free-agent quarterback Colin Kaepernick had not been signed by a team. Johnson claimed the NFL was discriminating against Kaepernick for his actions in the previous season, when he knelt during the national anthem in protest of police brutality.

Later that day local chapters of the NAACP participated in a protest supporting Kaepernick outside of NFL headquarters in New York City. Although the NFL integrated in 1946, a full year before Major League Baseball, and about 70 percent of current NFL players are black, the rally organizers demanded that the NFL “establish a unit tasked with developing a league wide plan to improve racial equality.” The distance in outer space from which that sentiment came was exceeded only by former NAACP President Cornell William Brooks’s answer in the previous year, “It’s lofty, but it’s not a stretch” when asked if Kaepernick should be compared to Rosa Parks.

What Kaepernick’s employment status had to do with racial equality is not clear. If the attendance at the rally (only about 1,000) was any indication, most of the African American community didn’t see any connection. The sparse attendance may have also been sending a subtle but more important message: The NAACP no longer represents the interests of the African American community. Indeed, it may actively harm those interests.

The NAACP has a long and storied history. Founded in 1909, it spent decades fighting Jim Crow laws in the South and played a pivotal role in the landmark desegregation case Brown vs. Board of Education. It also pressed hard for the 1964 Civil Rights Act and the 1965 Voting Rights Act.

But over time, the idealists in the organization were replaced by opportunists. Or, as social philosopher Eric Hoffer once wrote, “Every great cause begins as a movement, becomes a business, and eventually degenerates into a racket.” In 1994, the NAACP board ousted Executive Director Benjamin Chavis when he was accused of using NAACP funds for an out-of-court settlement in a sexual harassment lawsuit. The next year, Chairman William Gibson was accused of mismanaging NAACP funds, resulting in his ouster from the organization.

While the NAACP may have rooted out corruption in its ranks, it has never regained its idealism. The NAACP today is a business that generates millions in revenue by campaigning against racism. But racism has long been on the decline in America and is no longer the most serious problem plaguing the black community. By keeping its focus on issues of discrimination, the NAACP no longer does much to advance the black community. Indeed, by supporting a victim mentality and opposing reforms such as charter schools, the NAACP actually harms blacks in America. Sadly, the NAACP has every incentive to maintain its current focus, regardless of how much it hurts the black community.

Taleeb Starkes, author of the bestselling book Black Lies Matter, lists five problems as the biggest ones facing the black community in America:

Too many blacks, he claims, view themselves as victims. They believe that they are not responsible for their own situation. Their problems are all someone else’s fault, and they see little chance of improving their lives. Black churches, liberal politicians, and public schools all reinforce this mentality, according to Starkes.

Starkes claims that the black community lacks diversity of opinion and thought. The black community does not have an honest dialogue about what is holding it back because too many blacks listen only to leaders such as Al Sharpton and Jesse Jackson, while opposing voices such as Thomas Sowell and Walter Williams are often demonized as sellouts. Blacks in general are unlikely to advance until there is an honest accounting of what plagues the black community.

Crime is another major problem plaguing the black community. About 50 percent of murder victims are black. The perpetrators are also likely to be black, a group Starkes refers to as urban terrorists.

Most people refer to the next problem as out-of-wedlock births or illegitimacy, but Starkes frames it as “Proliferation of Baby Mamas” because he thinks while the absent fathers involved in out-of-wedlock births are often criticized, the mothers involved are given a pass. He notes that in 1965 about 25 percent of black babies were born to unmarried mothers. Today, that number is 75 percent. Much of the black community exacerbates this problem by holding the mothers blameless.

Starkes finished his list by stating that, “Unwavering loyalty to progressive-liberal policies is the primary reason that these dire conditions persist.” He notes that progressivism is the common link among heavily black cities that face rampant crime and poverty, fatherless children, and failing schools. He cites the cities of Detroit, Baltimore, and Philadelphia, which have been run by progressives for decades. If progressive policies worked, these cities would be a successful model for blacks. Instead, they are disasters.

One might quibble with Starkes’s list, saying that problems such as lousy public schools or a lack of entrepreneurship should be on it. But what is interesting is what did not make his list: racism. That’s not an oversight. “There will be no solution to the problems afflicting black America,” Starkes says, “until more blacks recognize that the issues plaguing our community are ultimately self-inflicted . . . waiting until there are no more racists will mean waiting, and making excuses, forever.”

Additionally, racism has been on the decline in the America for decades. Discriminatory policies such as Jim Crow laws have long since been abolished. In the past half century, survey data has found a dramatic increase among whites for support of equality in schools, employment, and public accommodations. Surveys have also found steep drops among whites in the negative stereotypes they hold of blacks and in whites’ opposition to interracial neighborhoods and marriage.

This is not to say that racism no longer exists in America. It does and, to some extent, it always will. Yet racism has declined greatly in the past few decades—to the point that blacks in America face far greater problems than racism.

In the next installment of “The NAACP Harms,” see how the NAACP feeds on and feeds into the victim mentality.