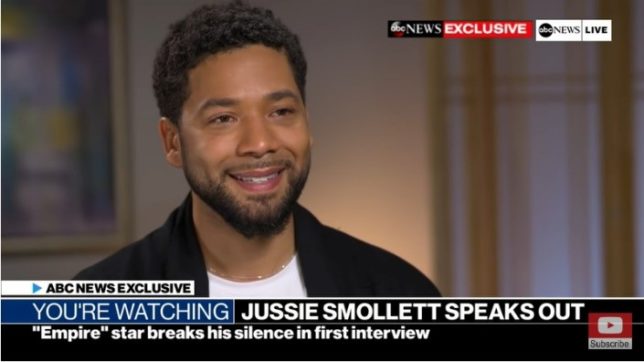 The hate crime against Jussie Smollett turned out to be a hoax organized by Smollett himself. But the fundraising opportunities from Smollett’s case were too good to pass up: In April 2019, the NAACP nominated Smollett for one of its Image Awards. Credit: ABC News. License: https://bit.ly/2yXPip8.
by David Hogberg

In fact, the NAACP focuses on issues that do little to help the black community and may in fact harm it. An effective way to demonstrate this is to search terms using the search engine on the NAACP’s website.

Not surprisingly, terms such as “discrimination,” “racism,” and “victim” return ample results—1,902, 605, and 294, respectively. But “out-of-wedlock births” returns only one result, and “illegitimacy” returns none at all.

Putting the term “crime” into the search engine returns a respectable 520 results, suggesting that the NAACP is quite concerned about the issue. But that’s misleading. Putting in terms for specific types of crime reveals the NAACP’s true priorities. The crime “lynching” returns 98 results, and “police brutality” returns 295. But “black-on-black” crime yields a pitiful four.

Is the NAACP concerned about education for black schoolchildren? The 3,300 search results for the term education suggests the answer is yes. But again, the specific terms are important. Searching for “public schools” yields 821 results. Adding “increase funding” or “increased funding” to the term education yields 100 results combined. But “failing public schools” returns only 24 results while “school choice” yields a paltry 12. The search engine returns 95 results for “charter schools,” showing that it is an issue the NAACP addresses. But as we shall see later, the NAACP opposes charter schools.

An individual with a “victim mentality” believes himself to be at the mercy of forces beyond his control. He is not responsible for his lot in life and sees little chance of improving his own situation. Ultimately, it is a destructive mentality.

A recent Pew Research Center survey suggests that many blacks suffer from the victim mentality. The survey found that 78 percent of black respondents said that the U.S. hasn’t gone far enough in giving blacks equal rights with whites, and over two-thirds said that being white helps either a little or a lot in getting ahead in the U.S. Most tellingly, 52 percent of blacks said that being black had harmed their ability to get ahead either a little or a lot—more than double of any other racial group in the survey.

The NAACP feeds on and feeds into this mentality. For example, a fundraising appeal from the Washington, DC, branch of the NAACP states, “Thanks to your support, our fight against all forms of racial bias continues every day” (emphasis added). The NAACP’s membership page claims, “If you care about fighting disparities that are still too prevalent in America, the NAACP is the place where you can make a difference.” On the surface those statements may seem empowering—join the fight! But they imply that America is a place rife with racism. That’s not an empowering message.

In January 2019, Jussie Smollett—a black, gay actor—claimed to be the victim of a hate crime. The statement by NAACP President Derrick Johnson regarding the “crime” was rife with victim mentality:

The recent racist and homophobic attack on acclaimed actor and activist Jussie Smollett is troubling. The rise in hate crimes is directly linked to President Donald J. Trump’s racist and xenophobic rhetoric. It is dangerous for any society to allow a tone of divisiveness and hatred to dominate the political discourse. As this rhetoric continues to bleed into our everyday lives, dangerous behavior will continue to place many law-abiding individuals at risk. We pray for a full physical and mental recovery Jussie Smollett and many unnamed victims of this form of hate based terrorism.

The hate crime against Smollett turned out to be a hoax organized by Smollett himself. But the fundraising opportunities from Smollett’s case were too good to pass up: In April 2019, the NAACP nominated Smollett for one of its Image Awards. 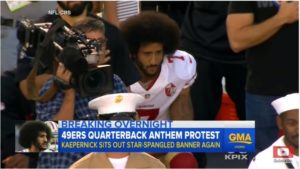 Derrick Johnson claimed the NFL was discriminating against Colin Kaepernick for his actions in the previous season, when he knelt during the national anthem in protest of police brutality. Credit: ABC News. License: https://bit.ly/3bBs5Xq.

Last season, Mr. Kaepernick chose to exercise his first amendment right. . . . [By] taking a knee during the national anthem, he was able to shine a light on the many injustices faced by people of color, particularly the issue of police misconduct toward communities of color . . . as the NFL season quickly approaches, Mr. Kaepernick has spent an unprecedented amount of time as a free agent, and it is becoming increasingly apparent that this is no sheer coincidence. No player should be victimized and discriminated against because of his exercise of free speech—to do so is in violation of his rights under the Constitution and the NFL’s own regulations.

Kaepernick was a quarterback whose skills had been in serious decline for the previous three seasons. In 2016, his final season, he was ranked near last among starting quarterbacks in the NFL. Any team that signed him would not only have to consider his declining skills, but also that his protest of the national anthem might alienate fans. None of that mattered to the NAACP, though. Kaepernick was a victim of an NFL that had blacklisted him for protesting racism.

While the NAACP’s effort on behalf of Kaepernick were likely good for the organization’s fundraising, it will have a more pernicious effect on the black community. The NAACP is, in effect, sending the message that even a famous millionaire like Kaepernick is a victim of racism in America. Young black people living in the inner city will look at that and say to themselves, “If Kaepernick can’t succeed against racism, what hope is there for me?” Regrettably, the NAACP will likely not stop exploiting the victim mentality any time soon.

In the next installment of “The NAACP Harms,” learn about the NAACP civil war that broke out in 2017.