NAACP Harms the Black Community: Too Risky to Change

Why the NAACP Does Not Shift Its Focus

Once, when he was criticizing left-wing political activists, economist Thomas Sowell was asked why don’t the activists pursue a different line of work? Sowell responded, “Why don’t professional wrestlers become concert violinists?”

What Sowell meant was that people who have years of experience in one profession can find switching to a different profession very difficult. It not only means learning something entirely new, but also giving up all of the perks that come with being an employee with lots of experience, such as generous compensation, status, and respect.

Consider NAACP President Derrick Johnson. A lawyer by training, he has been involved in political activism and academia almost his entire adult life. Before he was named head of the national NAACP in 2017, he worked as a lecturer at Harvard and an adjunct professor at Tougaloo College in Mississippi. While in the Magnolia State, he was the regional organizer for the nonprofit Southern Echo and later served as president of the Mississippi chapter of the NAACP. He led two successful bond initiatives for school funding in Jackson and, in the wake of Hurricane Katrina, founded One Voice Inc. to provide training for community leaders.

The NAACP leadership is full of lawyers, academics, and activists who have spent their careers working on civil rights issues. They would be ill-equipped to run an organization that focuses on reducing crime, discouraging women from getting pregnant before marriage, teaching young men and women how to start and run a business, and so on.

The NAACP has become a very lucrative empire by focusing on racism and related issues. Shifting the focus of the NAACP would mean putting that at risk. According to its latest 990 tax return, the national NAACP, located in Baltimore, raised over $33 million in 2018. Its legal arm, the NAACP Legal Defense and Education Fund, raised over $22 million.

A list of donors to the NAACP is a who’s who of left-leaning foundations (for a partial list see Table 1). Undoubtedly, they and most other contributors to the NAACP believe in the NAACP’s mission of combating racism. They donate because they think that racism is still one of America’s biggest problems. 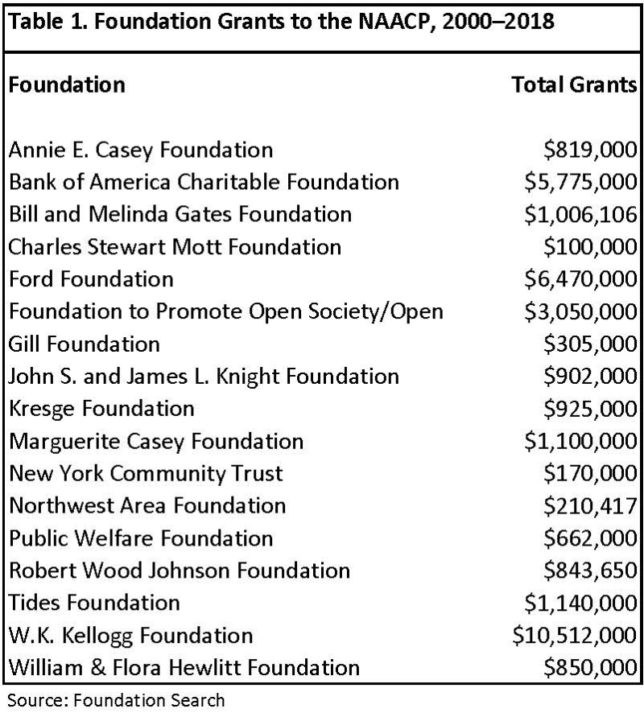 What would happen if the leaders of the NAACP told their donors that they no longer believed that racism is a serious problem for the black community? What if they informed their backers that it was time for the NAACP to focus on other, more pressing problems such as out-of-wedlock births, black-on-black crime, and the victim mentality? The empire would likely collapse. The $55 million taken in by the two main organizations would shrink to a fraction of its size.

The sizable compensation of many of the NAACP employees would also be a casualty. For example, the NAACP pays Derrick Johnson, $300,000 annually while General Counsel Bradford Berry earns over $200,000. Sherrilyn Ifill earns over $400,000 as head of the NAACP’s Legal Defense Fund and associate director-counsel of the NAACP’s Legal Defense Fund, and Janai Nelson earns over $260,000 as its associate director-counsel. Indeed, 16 NAACP employees make six-figure salaries (see Table 2), and those are just the ones listed on the tax returns. Incomes of that size put them among elite earners in the U.S. An individual income of just over $158,000 puts one in the top 5 percent of earners. Thus, three-quarters of the employees in Table 2 are among the top 5 percent. And all 16 are in the top 10 percent. 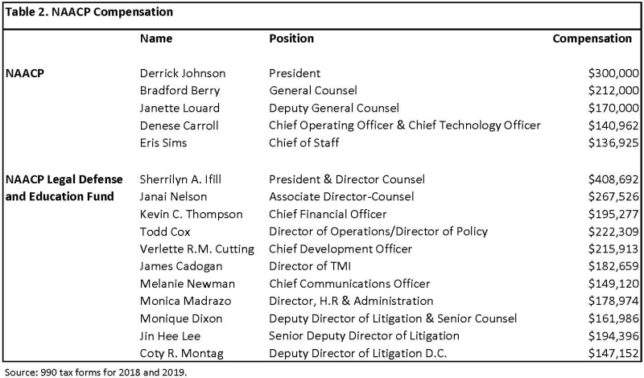 Too Risky to Change

The people who run the NAACP have far too much to lose to risk changing the organization’s focus. The organization’s fundraising is based on fomenting the victim mentality among blacks and appealing to liberal prejudices about what ails the black community. Focusing on racism allows the NAACP and its Legal Defense and Education to raise over $50 million annually. It enables its top employees to earn very generous compensation packages and achieve status and prestige among their liberal peers and in the media. And that gives them every incentive to ignore the real problems facing the black community. 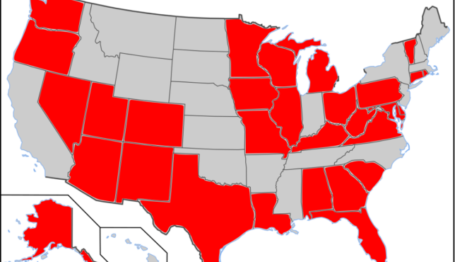