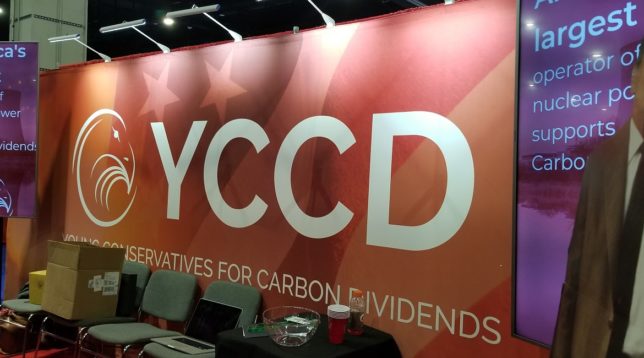 Young Conservatives for Carbon Dividends at CPAC 2020
by Hayden Ludwig

Dear CPAC-goers, if you thought the biggest threat to conservatism was in Washington, guess again—they rented prime real estate at the biggest gathering of conservatives in America.

You may have noticed 2 out-of-place groups: Young Conservatives for Carbon Dividends and RepublicEn, the latter run by climate hawk and former Rep. Bob Inglis (R-SC). Both want conservatives to adopt an onerous and frankly un-conservative carbon tax, promising to pay it back to you in the form of “carbon dividends.” That’s wealth redistribution by any other name.

These groups call themselves “free market” environmentalists, but they’re better labeled the eco-Right: supposed conservatives who preach the religion of manmade global warming with the same fervor as the left-wing faithful.

They aren’t the Left, but they’re often funded by unambiguously leftist groups who view these eco-cons as “useful idiots.” Rather, the eco-Right wants skeptical Republicans to compromise with hard-line global warmers by abandoning science, dispelling doubts, and submitting to environmentalists’ anti-human agenda.

YCCD’s too new to dig up its donors (there’s a 1-2 year delay before grants are reported in their Form 990s), but I’ve identified at least one left-wing donor to YCER: the William and Flora Hewlett Foundation, which paid the group $150,000 in 2018.

If you don’t know the Hewlett Foundation—started by the co-founder of the Hewlett-Packard PC company—you should. It’s quickly become the largest funder of eco-Right and anti-Trump infiltrators on the Right, granting hundreds of thousands of dollars to groups like the libertarian-turned-liberal Niskanen Center and Bill Kristol’s Defending Democracy Together (which runs The Bulwark).

In 2018 alone, the Hewlett Foundation gave Niskanen $500,000, in part to support its increasingly radical lawsuits against oil companies for allegedly causing climate change. It also granted the Ohio Conservative Energy Forum $100,000 in 2018, a group that brags about how “conservative” it is.

And in 2017, Hewlett paid $200,000 to Citizens for Responsible Energy Solutions, an eco-Right group that stops short of endorsing a carbon tax but supports a “framework” for tracking carbon dioxide emissions. But that’s a silly distinction; monitoring CO2 is just the first step in regulating it, which CRES admits: “you can’t manage what you don’t measure.”

Let’s settle one thing: the eco-Right are environmentalists, not conservationists. They offer a siren’s song that promises “free market” global warming but will only result in green tyranny. There’s no compromising with the radical Left.

By adopting the theory that the Earth is getting dangerously hot and we’re to blame, the eco-Right has surrendered in the Left’s war on science and are little more than stooges for Big Green. Why else take leftist money?

And make no mistake; there is a war on science. If conservatives join leftists in demonizing carbon dioxide—a natural gas essential to life on Earth—they’ll lose more than just elections. They’ll lose America herself.

This post first appeared on the Heartland’s Freedom Pub on March 10, 2020.