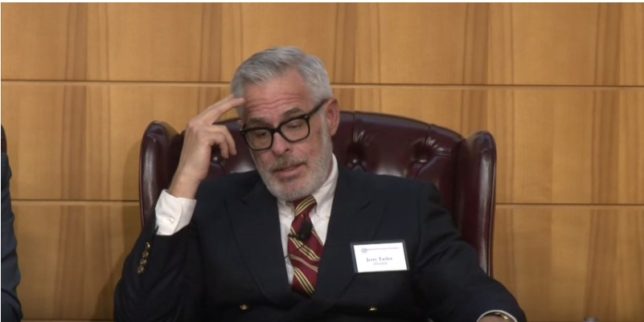 So let’s stop pretending it’s any of those things. Instead, let’s call the Niskanen Center what it is: a hired gun for Big Green, created by and for the eco-Left.

The Niskanen Center was born from a 2014 split with the Cato Institute, a libertarian think tank. Before founding Niskanen, president Jerry Taylor, worked for Cato as vice president. He called himself a “warrior” for climate change skepticism in a 2017 interview with the center-left Intercept—one who now “regret[s] a lot” of his work at Cato.

But apparently Taylor regrets more than just his work. Last October, the regretful warrior wrote that he had “abandoned” his left-leaning libertarianism in a piece entitled The Alternative to Ideology (he now prefers to describe himself as “a Republican”). Now Taylor wants the rest of us to “leave ideology behind . . . for something better”—moderation.

Naturally, the Left received the news with glee. “A libertarian think tank just gave up on libertarianism,” wrote Quartz, which praised Taylor even as it lamented that “ever fewer temperate souls are left to hold the middle ground in politics.” New York Magazine’s Jonathan Chait noted that Niskanen’s pro-big government ideas constitute “frontal assaults on the basic orientation of the libertarian political project.”

So what does any of this matter?

Consider the Niskanen Center’s value as an infiltrator in the conservative movement. For decades, one of the goals of left-wing environmentalists has been winning Republican support for global warming legislation. Although they haven’t succeeded in gaining majority support among Republicans, they’ve found allies in moderates who bought the narrative of catastrophic man-made climate change, such as the late Sen. John McCain (AZ), one of only two Republican co-sponsors for the Democrats’ failed 2003 cap-and-trade bill.

That’s the driving force behind a well-connected band of carbon tax advocates that has infiltrated the Right, Niskanen among them. Individually, they’re small, but taken as a network they cast the illusion of groundswell support for conservative action on climate change.

They’re also armed with major funding from left-wing groups. According to its own documents, Niskanen is overwhelmingly funded by the Left, receiving grants from the Energy Foundation, Arnold Foundation, Silicon Valley Community Foundation, Carnegie Corporation of New York, and the Rockefeller Brothers Fund.

Since 2016, Niskanen has received at least $2.75 million from the Hewlett Foundation, a group which also funds the League of Conservation Voters Education Fund and the anti-fossil fuel group Oil Change International. In 2017 alone, Hewlett funding accounted for over a quarter of Niskanen’s total annual revenues.

In 2016, Niskanen spun off the Niskanen Center for Public Policy, a 501(c)(4) lobbying arm which has received virtually zero attention in the media but plenty from left-wing funders.

It shouldn’t come as a surprise, then, that Niskanen promotes the “open society” vision also held by George Soros. According to a Niskanen document, both the Center and Soros’s Open Society Foundations are aligned with “open society” philosopher Karl Popper, a former Marxist who advocated for social engineering.

The Center even runs an “Open Society Project,” an anti-Trump attack group created in November 2016 with funding from Pierre Omidyar. Niskanen claims the project’s “Meeting of the Concerned” led to the creation of Bill Kristol’s Republicans for the Rule of Law (also funded by Omidyar), which regularly launches ads accusing the President of “obstruct[ing] justice.”

But Niskanen’s bread and butter remains carbon tax advocacy. The group has called for a tax on methane produced by agriculture (“especially the livestock sector”) as well as oil and natural gas. It supported California’s cap-and-trade program extension in 2016 but pushed for a carbon tax which would supposedly make “California an even more competitive economic dynamo.” Taylor himself has even called himself “a friend” of the far-left activists pushing the Green New Deal, calling their cause “just” if “sometimes given to overstatement.”

In a bizarre 11,000-word love letter to the movement, Taylor offers sage advice to climate change alarmists about how to avoid conservative criticism:

You are inadvertently confirming conservative suspicions that you are stoking fears about climate change as a convenient excuse to achieve your real objective: dismantling capitalism as we know it and putting society on a wartime footing under the direction of avowed socialists [emphasis added].

While that’s an unfair characterization of the motivations of most of the climate activists I know, “solution aversion” and the suspicion that environmentalists are fundamentally hostile to contemporary American society are two key factors fueling conservative opposition to climate action.

“The most important thing you’ve done right,” Taylor concluded, “is to elevate climate change to the top of the progressive agenda while making a strong moral case for action.”

A moral case for action? Never mind the blatant socialism behind the Green New Deal; Taylor’s response amounts to asking radicals just to “tone it down a bit.” (Recall that besides writing the Green New Deal, Ocasio-Cortez also recently claimed that the “world will end in 12 years” if global warming isn’t addressed.)

But perhaps Taylor’s right to appeal to the Left. After all, efforts to institute global warming legislation—such as the 2009 Waxman-Markey cap-and-trade bill and Rep. Carlos Curbelo’s (R-FL) 2018 carbon tax bill—have essentially been Democratic efforts, garnering only minority support from congressional Republicans.

Far from encouraging a wave of Niskanen-like climate change conservatives, those efforts have arguably had the opposite effect on the GOP. Just five months before the 2018 midterms, for instance, House Majority Whip Steve Scalise (R-LA) introduced a resolution “expressing the sense of Congress that a carbon tax would be detrimental to the United States economy.” His anti-carbon tax resolution passed 229-180; only 6 Republicans voted against it.

Voters showed similar preferences, favoring Democrats over climate change-supporting Republicans. No fewer than 23 Republican members of the left-leaning Climate Solutions Caucus were replaced by Democrats in the 2018 election, including co-chair Curbelo himself (that’s 51 percent of the 45 Republicans on the Caucus.)

While it wouldn’t be accurate to attribute those results to support for climate change policies, it’s clear that, as a group, congressional Republicans in 2019 are even less in favor of regulating carbon than they were when Curbelo introduced his carbon tax last August. If Niskanen wants to make the case that voters want climate change policies, they’d better make it to Democrats.

But even with dire warnings about the inevitable apocalypse in 12 years, voters aren’t particular concerned with global warming, either. In a March 2019 CNN poll, a measly 2 percent of respondents said that “climate change/global warming” was their top issue in deciding who to vote for in the 2020 presidential election—far behind immigration, the economy, and healthcare.

So what should we make of the Niskanen Center? Jerry Taylor’s climate change activists are political chameleons employing a free market veneer. That makes the group a credible threat. The only response to such an infiltration is to cast a discerning eye over the actual policies of supposedly “conservative” approaches to addressing climate change.