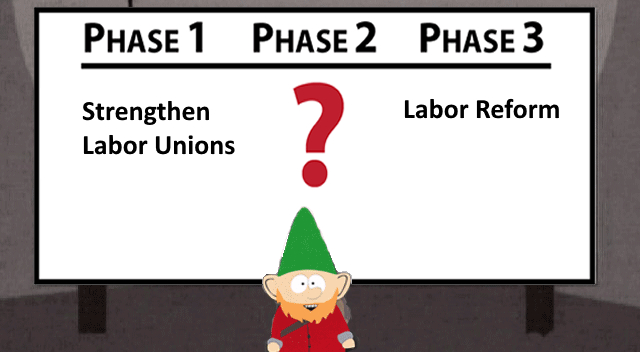 I regret to inform you that the “labor conservatives,” whose double-bank-shot play to use organized labor for various conservative purposes are at it again. I debunked this play at length in a recent Capital Research magazine piece.

The American Compass affirmation is clear and unequivocal in its endorsement of labor unions: “Rather than cheer the demise of a once-valuable institution, conservatives should seek reform and reinvigoration of the laws that govern organizing and collective bargaining.” But the intent is to make Big Labor a larger force in American public life, not to ensure that union families will no longer be compelled to support Big Labor’s single-minded left-progressive agenda, which 40-plus percent of union families oppose.

All would substantially increase the power of labor unions, even if NLRA were repealed.

What Is Phase Two?

But wait a minute. If unions have been praised and strengthened in American public life, why would they agree to end their privileges to exclusive monopoly representation? I cannot think of any special interest in the history of American politics that has voluntarily and without pressure from a hostile opposing political force given up a monopoly.

Like South Park underpants gnomes, who skip directly to “profit” after collecting underpants, the labor conservatives have shown no apparent clue as to how to get from empowering labor unions to fundamental labor reform.  Their proposed “solutions” all strengthen the Big Labor they claim to recognize is often “unresponsive to workers’ needs and some[times] outright corrupt.”

It’s All About the Details

The most glaring defect in the labor conservatives’ manifesto is its total lack of detail, but they avoid detail for a very good reason: Any degree of detail would derail the labor conservative project. A sufficiently detailed analysis would force the labor conservatives to reckon with unions’ aggressive social liberalism, both in funding social liberal groups and in campaigning for woke-progressive workplace activism. It would force them to acknowledge the deep links between labor union-aligned academics and the Marxian radical Left. They would have to struggle with the realities of labor union staff and activists, characterized by some on the left as “the ‘wokest’ spaces in left-of-center politics.” They would also need to recognize the overwhelming partisanship of labor unions relative to other special interests. And they would have to grapple with the all-too-frequent incidence of labor unions’ advocacy alongside employers at the expense of consumers and the general public.

It is one thing to assert without evidence that strengthening labor unions and worker representation would lead to economic prosperity and strong communities while being consistent with limited government. It is another thing entirely to ignore all evidence to the contrary.