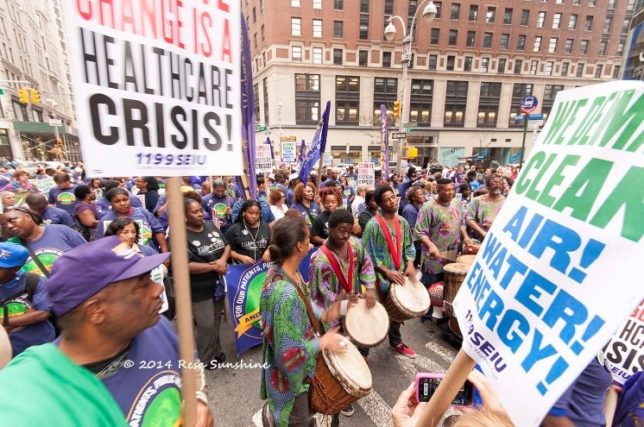 In recent months, a faction of conservative and other right-leaning writers has proposed an audacious strategy to counter the influence of “woke capital”—left-progressive social policy enacted through corporate boardrooms and business decision-making. These thinkers, many from social-conservative religious backgrounds, have identified labor unions as the solution to the power of increasingly socially liberal business elites, especially in the technology sector.

Don’t take my word for it. James P. Pinkerton, a former domestic policy aide to Republican presidents and Fox News contributor, wrote the following at the Daily Caller’s American Renewal:

So if we want to peek further into Ike’s bag of political tricks, we might look back at a 1956 campaign flyer, published by the Young Republican Labor Committee. The flyer features a cartoon of a happy elephant, sporting a worker’s cap and carrying a lunchbox. In addition to bullet points about the strong economy, we also see this shouted bullet: “INCREASED UNION MEMBERSHIP.”

. . . Yes, maybe Republicans will once again like Ike-like policies, including that happily unionized elephant.

Eli Lehrer of the R Street Institute has joined with an interesting partner to advocate increased authority for Big Labor:

Finally, labor organizations, employers, states, and local governments should be able to do what former SEIU [Service Employees International Union] president Andy Stern and I have proposed: apply for waivers from federal labor rules. Such waivers, modeled on those already common in education and health care, could allow experimentation with unbundled entities as well as with works councils before they roll out nationally.

The goals of Pinkerton, Lehrer, and their comrades in words are in some ways admirable. The changes in the political landscape that heralded Donald Trump’s election as president of these United States are the same changes that have accelerated formation of a Republican coalition that includes a higher proportion of working-class communities and voters.

One consequence was a shift in the voting behavior of union-member families (known as “union households” to exit pollsters). Despite the closeness of the electoral outcome (a swing of 70,000 votes distributed across three states would have made Hillary Clinton president), Trump’s margin with the bloc (he lost it by 8 percentage points) was the best for a Republican since Ronald Reagan’s 49-state landslide reelection in 1984. (CRC Distinguished Senior Fellow Dr. Steve Allen identified the possibility that Trump could scramble the historical partisan voting behavior of union households in an April 2016 edition of Labor Watch, reporting on Big Labor’s own concern at that possible outcome.)

That outcome, combined with aggressive moves toward social liberalism and environmentalism in the corporate world under the auspices of “environmental, social, and governance” policies, has served as a Siren call for some conservatives. They look to the labor movement—even labor unions as they exist today—as a means to protect social conservatives, as an alternative to the state socialism of the radical left, or as a way to “make the market work for American families.”

There may be understandable reasons derived from Catholic social teaching or from a desire to restore civil society to lament the hollowing out of alternative power centers to the state or the corporate mega-conglomerate as centers of social interaction. Yet the evidence presented in this piece demonstrates beyond any reasonable doubt that today’s labor union movement is so implacably hostile to conservatives of all stripes—not just the free-marketers—that it cannot and would not carry out any of those goals or any other conservative aim. I make my case with three classes of evidence that form the three subsequent sections of this piece.

First, I demonstrate how labor unions as institutions have provided support to a number of left-progressive advocacy campaigns and institutions not related to their ostensible core competency of relations between capital and labor. In these cases, the labor unions have all but universally weighed in on the side of institutional managerial progressivism—the “woke” social-liberal culture that the conservative friends of labor seek to counter.

Second, I show (with assistance from CRC’s research specialist Robert Stilson) that labor unions and their employees, officers, and directors are too deeply interlinked into an infrastructure of left-progressivism to be trusted to protect conservative, especially social conservative, interests against corporate infringement.

In the next installment of Organized Labor Is Not a Potential Ally, learn more about the political agendas of labor unions.