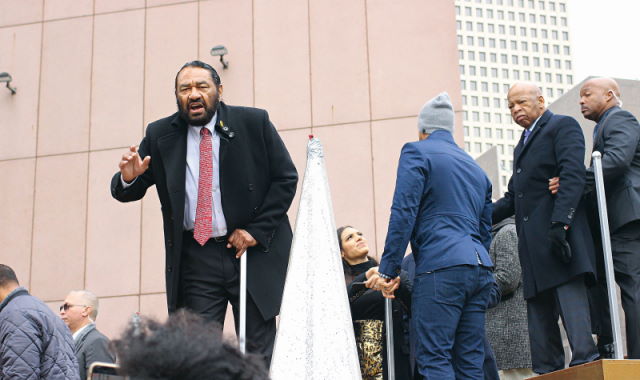 After the fourth impeachment vote, Rep. Al Green (D-TX), who pushed the first three floor votes, told MSNBC, “Well, the genesis of impeachment, to be very candid with you, was when the president was running for office,” Credit: 2C2K Photography. License: https://bit.ly/2SwGDjZ.
by Fred Lucas

For trigger-happy Democrats, the third floor vote on impeachment wasn’t a charm—but the fourth time would be.

The anonymous whistleblower complaint about the Ukraine phone call and investigating Hunter Biden’s misdeeds abroad presented another rationale for Democrats. Pelosi and the self-professed moderate Democrats were—for the most part—exhausted.

The new impeachment inquiry certainly created work for left-wing organizations. Among the new ones to pounce on the Ukraine saga was ImpeachmentHQ. It functioned as a rapid response campaign “war room,” sending out press links and spin to the media. ImpeachmentHQ was a joint effort of Defend the Republic and Stand Up America.

After an investigation run mostly by the House Intelligence Committee, the House Judiciary Committee approved the two weakest and most undefined impeachment articles in history: abuse of power and obstruction of Congress—neither of which are crimes.

While the Judiciary Committee approved an abuse-of-power article against President Richard Nixon, the Watergate impeachment articles also included obstruction of justice—an actual crime under federal statute. Clinton was impeached for perjury and obstruction of justice, actual crimes under statute. The full House in fact rejected an abuse-of-power charge passed by the House Judiciary Committee. Even the impeachment of Andrew Johnson—widely regarded as discredited by modern historians—was based on violating an existing law duly enacted by Congress, the Tenure of Office Act. Though, the Supreme Court would find the law unconstitutional decades later.

Nevertheless, the Left was jubilant on impeachment day. Waters wasn’t shy about crowing on the House floor the day of the vote:

History will remember those who were willing to speak truth to power. Yes, I called for Trump’s impeachment early. This is our country. Our foremothers and our forefathers shed their blood to build and defend this democracy. I refuse to have it undermined. I wholeheartedly support this resolution. I’m proud that in the final analysis, justice will have been served in America and Donald Trump will have been impeached.

After the House voted to make Trump only the third president in American history to be impeached, objective journalists with the Washington Post recognized the somber gravity of the moment by openly celebrating.

Post reporter Rachael Bade tweeted a photo of four of her Post colleagues at a restaurant table with food and drink, smiling brightly that said, “Merry Impeachmas from the WaPo team! [Paul Kane] is buying…w/ [Karoun Demirjian] [Seung Min Kim] [Mike DeBonis].” Bade later deleted the tweet, though not before enough screen shots were taken.

Green, who pushed the first three floor votes, was both happy and honest during a MSNBC interview. With four impeachment votes, the law of averages was almost on his side. “Well, the genesis of impeachment, to be very candid with you, was when the president was running for office,” Green told MSNBC.

Surprising no one, Trump was acquitted in a Senate trial, with a vote mostly along party lines.

But the radical politicians and advocacy groups that made up Impeach 45, Inc.—a not entirely coordinate effort but one with a common goal—got what they wanted: A Scarlet I on Trump’s place in history alongside Bill Clinton and Andrew Johnson.