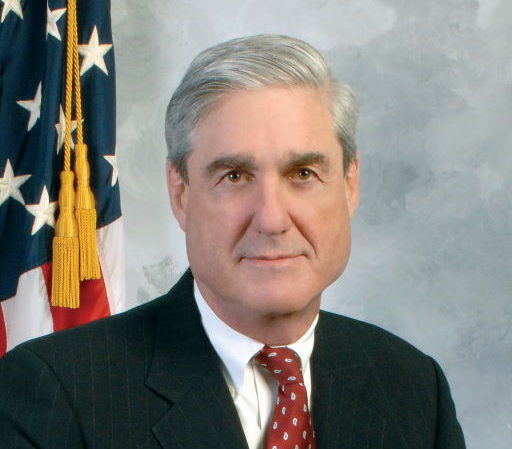 The report by Special Counsel Robert Mueller cleared Trump and his campaign of conspiring with the Russian government to meddle in the 2016 election. Credit: Federal Bureau of Investigation. License: Public domain.
by Fred Lucas

In November 2017, Rep. Maxine Waters (D-CA) finally had a grand stage to essentially name the movement she and others on the far Left had advocated for since before Donald Trump was sworn in as president. She was speaking to more than 1,000 people at Glamour magazine’s Women of the Year Awards at Brooklyn’s King Theater:

You recognize when a leader is dangerous, even if that leader is the president of the United States of America. . . . For those who say to me, “You are asking for something too soon and too early, be careful, don’t jeopardize yourself, don’t say what you’re saying right now,” I will continue to say, “Impeach him! Impeach him! Impeach him!”

The crowd erupted with “wild applause and a standing ovation.”

And the crowd engaged in an “Impeach 45” chant.

It would become a regular chant and hashtag for the Left going forward to try to oust the 45th president from office before the next election.

All of this was well before Trump’s phone call with Ukrainian President Volodymyr Zelensky. It was also well before the report by Special Counsel Robert Mueller that cleared Trump and his campaign of conspiring with the Russian government to meddle in the 2016 election.

Waters had been and would continue to be the loudest cheerleader for what was essentially Impeach 45 Inc., as described in my book Abuse of Power: Inside the Three-Year Campaign to Impeach Donald Trump.

Eventually, it wasn’t just Waters and members of the Congressional Progressive Caucus. The dam broke—or a “crescendo” emerged as one establishment Democrat congressman later called it—of demands from the organized Left, which whipped enough voters into calling for an impeachment inquiry. By July 2019, before the Ukraine call was in the news, a majority of House Democrats voiced support for an impeachment inquiry. This followed a blitz by left-wing billionaire Tom Steyer; nonprofits such as MoveOn, Free Speech for People: and other organizations.

An Impeach 45 Inc. infrastructure had developed across the country, packed with people who could not accept the results of the 2016 election and were unwilling to wait for the next election. The improbable matter Democrat leaders wanted to dodge eventually became a fundraising rallying cry for progressive nonprofits, and advocacy groups that made impeaching Trump a litmus test for the Left.

The Democratic Party owed its House majority to the members who ran as centrists in 2018 in red and purple districts, promising that impeachment was not their agenda. In the end, these professed centrists were more frightened of a primary challenge from their left than having to explain away why they stuck with their party on a seemingly inconsequential vote.

When the Russia conspiracy theory was discredited and the push to impeach Trump for tweets, owning businesses, and firing executive branch employees (which a president is authorized to do) all sputtered out, Democrats turned to the Ukraine call.

It began after the election. In December 2016, a group of Democratic senators—led by Elizabeth Warren of Massachusetts—drafted rather unserious legislation insisting Trump divest his business assets, arguing that failure to do so would be a high crime and misdemeanor. It was a legal nonstarter, but it was a statement.

The first real push in the nonprofit sector emerged when two left-wing groups, which at least had the courtesy to wait for Inauguration Day, began demanding impeachment. Free Speech for People, which contrary to its name supports an amendment to the Constitution limiting campaign contributions, and RootsAction, a group that tries to mobilize voters on issues of climate change and civil rights, established ImpeachDonaldTrumpNow.org.

The site went live with a petition the moment Trump took the oath of office. On Inauguration Day, Ron Fein, legal director at Free Speech for People, told the Washington Post:

If we were to wait for all the ill effects that could come from this, too much damage to our democracy would occur. . . . If nothing else, it’s important for Americans to trust that the president is doing what he thinks is the right thing . . . not that it would help jump-start a stalled casino project in another country.

The two organizations developed a strategy that made it sound easy enough. Just get a resolution calling for the House Judiciary Committee to launch an impeachment.

Over time, it named 10 grounds for impeachment. These included emoluments (or profiting from public office), “giving aid and comfort to white supremacists and neo-Nazis,” abusing pardon power, and “threatening nuclear war against foreign nations.” The last seemed to take the side of North Korea over Trump. No matter. By the time the 2019 impeachment arrived, the ImpeachTrumpNow.org proposed articles of impeachment had been either discredited or forgotten about. But the seeds were planted.

Of course, substance of charges or a perceived injustice was never the point of what became Impeach 45 Inc. It was always about Trump and the narrative that he was an existential threat to, well, virtually everything.

Fein was correct about one thing on Inauguration Day, “Getting [an impeachment resolution] introduced is not going to be a problem.”

Weeks into Trump’s presidency, the ImpeachDonaldTrumpNow.org petition had more than 500,000 online signatures.

In an op-ed for Time titled, “Legal Scholars: Why Congress Should Impeach Donald Trump,” James Nelson, a former Montana Supreme Court justice and member of the legal advisory committee for Free Speech for People, along with the organization’s president, John Bonifaz, wrote Trump must be ousted over his conflicts of interest:

In the case of Trump’s ownership in the Trump Organization, this could be achieved only by a complete liquidation of the assets, with the proceeds to be invested by an independent Trustee, without Trump’s involvement or knowledge. . . .

To address this unprecedented corruption of the Oval Office and this threat to our Constitution and our democracy, we believe Congress must move forward now with an impeachment investigation of President Trump.

“We’ve Got to Do Something About Him”

Impeaching Trump for something, anything, was a laser focus for the Left even before his inauguration on January 20, 2017, though Waters was one of only a few lawmakers who said that quite part out loud from the get go.

Shortly after the inauguration and before becoming the inspirational leader of the Impeach 45 movement, Waters didn’t seem to know the difference between Crimea and Korea. When Ukraine became the only tangible rationale for the eventually impeaching Trump, that presumably changed. In a television interview on Cheddar shortly after the 2017 inauguration, she said:

Well, I hope he’s not there for four years. I hope that this man and who he is, what he’s done, the way that he’s defined himself, the way that he’s acting, I am hoping that we’re able to reveal all of this. And my greatest desire is to lead him right into impeachment.

Waters is a veteran lawmaker who managed to have one foot in the establishment and one foot it in the far Left of the House Democratic caucus. She even has a bit of a political machine in Los Angeles. She explained during the Cheddar interview, “I’m not welcoming him. I won’t rejoice in him being president. I don’t honor him.”

I have not called for the impeachment yet. He’s doing it himself. Let me just say that the statement I made was a statement in response to questions and pleas I’m getting from many citizens across this country. . . .

The fact that he is wrapping his arms around Putin while Putin is continuing to advance into Korea [sic], I think that he is leading himself into that kind of position where folks will begin to ask what are we going to do. And the answer is going to be, eventually, we’ve got to do something about him.

She apparently meant Crimea. But her point “we’ve got to do something” was essentially the view from the Left who couldn’t stand the thought of leaving Trump’s future up to voters for a second time.

Waters continued to gain the most media attention for the purpose of impeaching Trump, going on ABC’s The View and speaking across the country about ousting the president—sometimes in the most inappropriate settings.

In September 2017, while delivering a eulogy for the late comedian Dick Gregory, she shouted, “We’re going to sanitize the White House. We’re not going to take what is happening in this country. Haven’t you taken enough?” She called Trump “this dishonorable human being who has the alt-right and the KKK in his Cabinet.”

Not surprisingly, PolitiFact didn’t swoop in to point out her defamatory statement that apparently Cabinet secretaries were alt-right or members of the Ku Klux Klan.

“When I get through with Donald Trump, he’s going to wish he had been impeached,” she continued during the eulogy.

In the next installment of “Impeach 45 Inc.,” follow members of Congress and left-wing nonprofits as they build the movement to impeach the president.