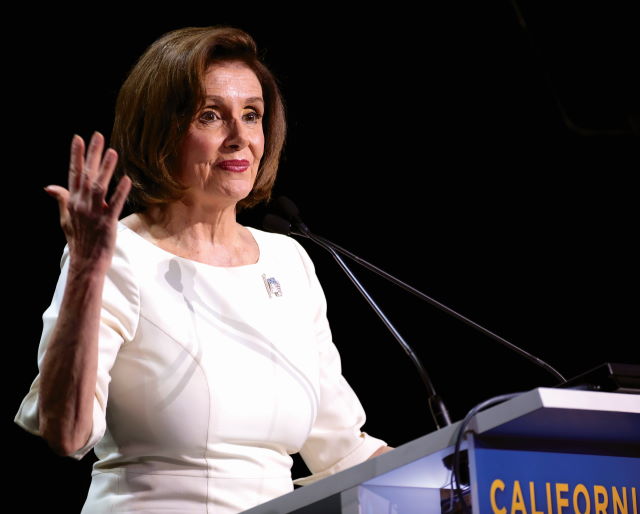 It’s not that Nancy Pelosi had a change of heart. It’s that political circumstances had changed. Instead of continuing to insist on an impeachment that was “compelling and overwhelming and bipartisan” she settled for uncompelling, underwhelming, and extremely partisan. Credit: Gage Skidmore. License: https://bit.ly/2Gv5KB2.
by Fred Lucas

Despite the pressure, enough Democratic candidates in red and purple districts ran as moderates, vowing to oppose impeachment and many vowing to vote against Pelosi as speaker—two promises that most would break. Thanks in large part to these promises, Democrats recaptured the House majority.

Others didn’t run to the center, such as members of what would become “the Squad.”

After MoveOn, Democracy for America, and Tom Steyer made some noise, we found that Free Speech for People was still around and still very much part of the Impeach 45 Inc.

President Donald Trump is a direct and serious threat to our country. On an almost daily basis, he attacks our Constitution, our democracy, the rule of law, and the people who are in this country. . . .

Each passing day brings more pain for the people most directly hurt by this president, and these are days we simply cannot get back. The time for impeachment proceedings is now.

The day after the op-ed appeared, Tlaib made her now infamous comment, “We’re going to impeach the mother f—er.”

Now Speaker of the House again, Pelosi had no interest in what the hardliners in her caucus wanted to pursue. Pelosi told the Washington Post in March:

I’m not for impeachment. . . . Impeachment is so divisive to the country that unless there’s something so compelling and overwhelming and bipartisan, I don’t think we should go down that path, because it divides the country. And he’s just not worth it.

The “not worth it” comment was before the release of the Mueller report that cleared Trump and his campaign of any conspiracy with the Russian government to meddle in the 2016 election. But Pelosi didn’t know with certainty what Mueller would conclude. So she was essentially writing off impeachment for what—at least in theory—might have been a truly horrific act of treachery against the United States if there had been any evidence. That’s presuming Pelosi ever thought the Mueller probe was legitimate.

Thus, it’s difficult to understand why the speaker seemed horrified months later by an improper phone call with the president of Ukraine—one in which no Democrat has ever been able to identify a crime.

It’s not that Pelosi had a change of heart. It’s that political circumstances had changed. Instead of continuing to insist on an impeachment that was “compelling and overwhelming and bipartisan” she settled for uncompelling, underwhelming, and extremely partisan.

Similarly, Rep. Jerry Nadler (D-NY), chairman of the House Judiciary Committee—where impeachment inquiries used to be held—said initially an impeachment should be bipartisan. Then, Nadler got a primary opponent in Lindsey Boylan, whose chief complaint was that the incumbent hadn’t moved to impeach Trump yet. Nadler remembered that in his home state Alexandria Ocasio-Cortez (D-NY) had shocked a 10-term incumbent establishment Rep. Joe Crowley (D-NY) in the 2018 primary election, and Nadler didn’t want to suffer the same fate.

Tlaib of Michigan and Ocasio-Cortez of New York would join Ilhan Omar of Minnesota and Ayanna Pressley of Massachusetts to form “the Squad,” which would go on to annoy Pelosi and even play the race card against her.

After Trump disparaged the Squad in a tweet, it was yet another ground for impeachment, according to Green’s thinking.

Green pushed yet a third impeachment resolution (H.Res. 498) to a vote before the full House on July 17, 2019, that described Trump’s tweet about the Squad as racist:

The House again tabled Green’s resolution. But this time, 95 Democrats voted against tabling the impeachment resolution, about twice as many as Green’s first resolution. A bipartisan 332 voted to table it. Among those who voted with Green was Nadler—by this point worried about his primary challenger.

In the next installment of “Impeach 45 Inc.,” see how the Ukraine phone call becomes the justification to actually impeach President Trump.