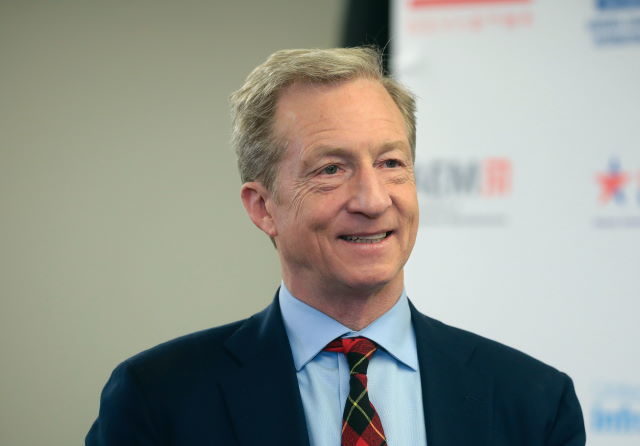 Tom Steyer bought pro-impeachment ads in all 50 states and denied that he was planning to run for president early on. He, of course, eventually did run for president and had an email list at his disposal. Credit: Gage Skidmore. License: https://bit.ly/30GaH0L.
by Fred Lucas

Waters was talking, but Rep. Al Green (D-TX) and Rep. Brad Sherman (D-CA) were the first to introduce an impeachment resolution (H.Res. 13) against Trump. Rep. Steve Cohen (D-TN) later did the same.

Green and Sherman called for ousting Trump from office for his firing of FBI Director James Comey, alleging that Trump was trying to deter the Russia investigation and the investigation of his former National Security Adviser Michael Flynn. The Comey firing essentially reinforced the prior biases of special interest groups that were waiting for a reason to impeach Trump.

Democracy for America, a left-wing nonprofit that rose from the ashes of the 2004 Howard Dean presidential campaign, issued a message to House Democrats calling Trump’s firing of Comey “a repeat of Richard Nixon’s most notorious actions during the Watergate scandal.” It also demanded impeachment and insisted the move wouldn’t harm Democrats in the 2018 midterms.

“Democrats should run on an inclusive, populist agenda of free college and paid family leave, but shouldn’t shy away from supporting impeachment,” Neil Sroka, spokesman for Democracy for America, told Fox News. “Democratic candidates in deep blue districts can and should be for impeachment.”

After his firing, Comey testified to the Senate Intelligence Committee in June 2017 and revealed virtually nothing that wasn’t already known.

However, MoveOn.org immediately sent a fundraising email having found the Comey testimony so compelling that they had no choice but to support Trump’s impeachment. In all likelihood, the email was written before Comey’s testimony. MoveOn.org is an all-purpose progressive activist group today but was ironically founded in 1998 to fight the Bill Clinton impeachment.

“Today, we’re doing something we’ve never done before in the history of MoveOn: We’re calling for the impeachment of the President of the United States,” the MoveOn email said. “The drive to impeachment won’t be quick or easy. We’ll need to sustain a big, powerful effort, so we’re asking you: Will [you] chip in $5 a month to press for the full truth about and accountability for Donald Trump?”

For his part, Cohen offered a kitchen-sink impeachment process that would include obstruction of justice, emoluments, and saying mean things about federal judges and reporters—deemed as undermining the independent judiciary and the free press.

The House of Representatives would actually vote on impeachment by the end of December when Green mustered enough support from far-Left members to bring the measure to the floor. When Rep. Kevin McCarthy (R-CA) made a motion to table the measure, the House was set to take its first vote on impeaching Trump.

The charge in the Green-Sherman resolution (H.Res. 646) was not obstruction of justice, but rather “associating the majesty and dignity of the presidency with causes rooted in white supremacy, bigotry, racism, anti-Semitism, white nationalism, or neo-Nazism.” Although the Green measure was defeated when 126 Democrats joined all Republicans, the news was that 58 Democrats voted to advance impeachment.

Democratic leaders generally said wait for the Mueller report. That didn’t stop Green from introducing another impeachment resolution (H.Res. 705) in January 2018, seeking to impeach Trump for referring to “sh—hole countries.” This time the resolution gained 66 votes from Democratic House members.

Loud voices such as Waters’s were not going to convince rank and file members. But far-Left members of Congress could rally the rabid anti-Trump base that would in turn (often through assorted advocacy groups) pressure members.

No one devoted more resources to this than billionaire Tom Steyer, who was essentially the financial backbone of Impeach 45 Inc.

The California hedge fund manager and Democratic mega-donor who spent $90 million to get Democrats elected in 2016,launched NeedToImpeach.com in October 2017. The online petition gained millions of names and email addresses. Steyer bought pro-impeachment ads in all 50 states and denied that he was planning to run for president early on. He, of course, eventually did run for president and had an email list at his disposal.

Steyer also ran the green nonprofit NextGen America. During his climateering, Steyer gave a speech saying: “If we win in 2020, they [Republicans] are done forever. But it’s scary for us, too, because if they win, literally it could be the end of the world.”

Steyer also sent a copy of Michael Wolff’s discredited book, Fire and Fury: Inside the Trump White House, to all 535 members of Congress.

Steyer, who lives in San Francisco, had been a Pelosi confidant, and she hosted him at her box for the 2016 Democratic National Convention in Philadelphia. But in this case, Pelosi reportedly found him to be a headache when it came to the drive to win the midterms. She didn’t want to talk about impeachment.

The Need to Impeach campaign thought differently, sending out guides to the more than 5,100 Democratic congressional candidates in 2018 who were running in primaries across the country. The impeachment guides assured the candidates:

Nothing is preventing Democrats from promoting an agenda focused on building a fairer economy, improving the health care system, and creating a more equal and just society—while also underscoring the need to impeach this president.

The guides then rattled off every supposedly impeachable offense against Trump, whether it involved alleged illegalities or not or was supported by any evidence. The guides listed collusion with Russians, obstruction of justice in firing James Comey, violations of the emoluments clause, advocating racist violence in his comments on Charlottesville, and abuse of power by pardoning Joe Arpaio, the ex-sheriff of Maricopa County, Arizona, for criminal contempt for disregarding a court order.

The guides went out two weeks ahead of more than a dozen debates sponsored by NexGen America, his environmental group. The two were separate entities, but the timing indicates how eager Steyer was to make Trump’s ouster a part of the 2018 campaign.

Steyer started spending money and traveling for 30 town hall meetings around the country in districts with anti-impeachment or wait-and-see Democrats. The goal seemed to be instilling fear of a primary, or at least depressing the turnout in the general election if Democrats were not on board.

In one instance, Steyer held a town hall meeting in Arlington, Virginia, to pressure Rep. Don Beyer, an establishment Democrat, to back impeachment. “The representative of this district, Don Beyer, is not in favor of impeachment, even though I think there are 90,000 people from this district who signed our petition,” Steyer said at the town hall, later adding, “This is a heavily Democratic, progressive district. . . . I think you guys should ask him for the reason.”

Beyer was reelected in 2018 but stated his view on impeachment had changed—and it sounded as if the Steyer minions had gotten to him. He said his charge of heart was based on his constituents’ “belief in the need to launch an impeachment inquiry—as expressed to me in calls, letters, and conversations—has grown to a crescendo.”

In the next installment of “Impeach 45 Inc.,” watch as impeachment proponents gradually wear down Democratic resistance to impeachment.