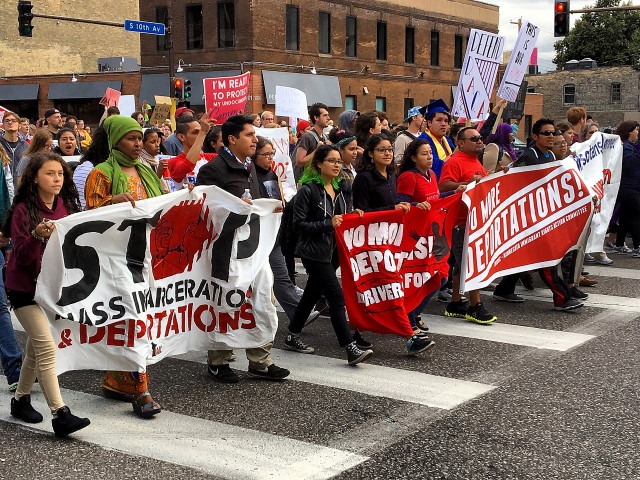 For a decade, Atlantic Philanthropies quietly bankrolled perhaps the largest ongoing campaign to drastically overhaul American immigration policy in U.S. history. From 2004 until liberals gave up on the issue in 2014, Atlantic spent $70 million across three coalitions to obtain amnesty for and virtually end deportation of 11 million illegal immigrants. (It spent another $50 million in South Africa, Ireland, and Northern Ireland on related immigration campaigns, bringing the total to a staggering $120 million.)

These campaigns were closely connected with other left-wing standbys, including Tides Advocacy—the 501(c)(4) wing of the Tides Foundation, which incubates new activist groups—and the Center for Community Change, an agitation group dating back to the 1970s.

We only know about this silent war because Atlantic still brags about it. “Atlantic Philanthropies was the biggest contributor of 501(c)(4) funding to the immigration reform field from 2004 to 2014,” the Bermuda foundation wrote in a 2015 autopsy report commissioned by Atlantic for use by other liberal donors in charting future campaigns like those it funded. Atlantic wrote of its campaigns:

[They] have used their 501(c)(4) designations to bolster pro-immigration reform and threaten anti-immigration reform candidates and electoral issues (e.g., ballot initiatives), most notably in the 2010 presidential and 2012 midterm elections. The added flexibility and muscle engendered by a 501(c)(4) structure would prove critical to the ensuing fight as the issue of immigration quickly morphed from policy to politics and elections became a key battleground. [emphasis added]

It’s important to remember that the period when Atlantic was funding immigration activism (2004–2014) was rife with immigration bills introduced by both political parties. During this period, “undocumented immigrant” replaced the term “illegal alien” (still the legal term, for now), and so-called DREAMers (children born to illegal immigrants in the U.S.) was established as part of the Deferred Action for Childhood Arrivals (DACA) program by President Obama’s executive order. Given the apparent bipartisan interest in passing an overhaul bill, reforms to existing law looked likely—yet never succeeded.

Like Health Care for America Now, which was launched around the same time as Atlantic’s second immigration coalition in 2007, these coalitions sought to construct an echo chamber around Congress and bludgeon lawmakers into supporting major legislation by hammering the same coordinated message: Americans demand action on immigration. While the coalitions were largely funded by Atlantic, domestic activist groups used every pillar of the professional Left to lobby their message.

The Coalition for Comprehensive Immigration Reform (CCIR), originally called the New American Opportunity Campaign, was created in 2004 as a coalition of 10 groups. Members included the Center for Community Change, National Immigration Forum, National Council of La Raza (“the race,” now UnidosUS), the Service Employees International Union (SEIU), and one of the unions that later formed UNITE HERE (an AFL-CIO affiliate). It soon expanded to include dozens of unions and union-affiliated groups and immigration lobbies.

From the start, CCIR (which shared office space first with AFL-CIO and later with the National Immigration Forum) had “an intense focus on message, voter mobilization and targeted grassroots activity.” It was led by Frank Sharry, executive director of the National Immigration Forum and an amnesty advocate who was arrested by U.S. Capitol police during a 2019 protest against President Donald Trump’s refugee resettlement policies.

Notable board members included Deepak Bhargava, an Open Society Foundations board member and longtime director of the Center for Community Change (a group featured heavily in this story), and Cecilia Munoz, also an Open Society Foundations board member and 20-year lobbyist for La Raza who later became a senior staffer in the Obama administration. Munoz is credited with being a major driver of the DACA program for illegal immigrants in 2012. Interestingly, both Sharry and Bhargava have spoken at Democracy Alliance conferences.

CCIR was a sophisticated, well-thought-out organization. Atlantic called it the “embodiment of [its] decision to pursue a campaign-based strategy for comprehensive immigration reform” and pumped $10 million into the group between 2004 and 2007, accounting for 96 percent of CCIR’s $10.4 million in revenue over that period.

CCIR launched its first major lobbying efforts with the Comprehensive Immigration Reform Act of 2006, introduced by Sen. Arlen Specter (R-PA), who rejoined the Democrats in 2009. The so-called Hagel-Martinez compromise—scathingly called the “amnesty bill” because it would have created a path to citizenship for illegal immigrants and expanded border security funding—passed the U.S. Senate but failed in the House of Representatives.

CCIR “went on the offensive to move and improve” its successor in 2007, but that bill died in the Senate, and Atlantic’s report notes that “campaign members” were forced “to rethink their strategies attempting to effect comprehensive immigration reform.” Ultimately, that meant scrapping and restructuring the entire coalition to move beyond bipartisan bills, which had continuously failed.

In 2008, CCIR changed its name and became America’s Voice—one of the top illegal immigration lobbies in DC today (revenue of $3.2 million in 2018). In 2009 it created a 501(c)(3) wing strictly to fundraise from left-wing foundations, which—as Atlantic candidly put it—“were unable to or uneasy about making grants to a 501(c)(4) organization.” America’s Voice has also grown more radical since its creation, demanding in 2018 that Congress “abolish” Immigration Customs and Enforcement (ICE)—the federal agency responsible for enforcing immigration law and pursuing cross-border crime—calling it a “destructive deportation force.”

In the next installment, learn how Reform Immigration for America attempted to create outside pressure on Congress.