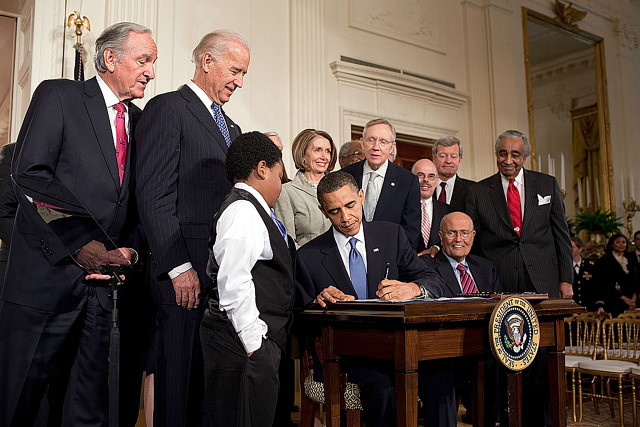 While the echo chamber model has been used countless times since “Progressives” began organizing a century ago, perhaps the most potent example of this deception was in 2009–2010, when the Left orchestrated an unprecedented campaign to pass Obamacare. Public Domain. License: https://bit.ly/2RWNxC5.
by Hayden Ludwig

Summary: Many on the Left would have the public believe their issue campaigns are born from broad grassroots support for Big Government policies. But it is far from the truth. The biggest “echo chambers” surrounding Congress on topics like health care and immigration reform were created by a cabal of professional activists with funding from many of the biggest foundations in America . . . and sometimes beyond. This is the untold story of how one Bermuda-based foundation spent $70 million over a decade trying to overhaul America’s immigration policies—and nearly succeeded.

The Cambridge Dictionary defines “echo chamber” as “a situation in which people only hear opinions of one type, or opinions that are similar to their own.”

That plus three features of most historical left-wing activism—a minority cast as the majority; special interest partisans framed as selfless, impartial advocates; and coordination meant to look like spontaneity—forms the basic model of echo chamber deception. Vladimir Lenin used this type of deception with great success when he styled his tiny band of communist revolutionaries as the Bolsheviki (“members of the majority”) and the opposition communist group as Mensheviki (“members of the minority”) in the lead up to the 1917 Russian Revolution.

While the echo chamber model has been used countless times since “Progressives” began organizing a century ago, perhaps the most potent example of this deception was in 2009–2010, when the Left orchestrated an unprecedented campaign to pass Obamacare. That campaign began in earnest in 2007 with the creation of Health Care for America Now (HCAN), a coalition of hundreds of labor unions, environmentalists, agitation groups, and think tanks led by hardened Democratic operatives. HCAN is credited with forming the blueprint that became Obamacare. More importantly, it used its members’ advocacy to form a bubble around the Democratic-controlled Congress and hammer home a single message: overhaul America’s health care system. And it succeeded, with President Barack Obama signing the bill into law in March 2010. Mission accomplished, HCAN dissolved later that year.

But at the same time, another campaign of nearly equal scale was being coordinated by activists: Reform Immigration for America (RIFA). This now-forgotten coalition of some 800 groups paralleled HCAN’s echo chamber to pressure Democrats into passing comprehensive immigration reform. Yet RIFA fell short and eventually disappeared altogether—ironically, probably due to HCAN’s success in shepherding Obamacare through Congress, leaving little room for another major overhaul bill before the 2010 midterms.

RIFA and HCAN had a lot in common and serve as useful case studies for those who study the professional Left and orchestrated mass political action. (I have speculated this tactic was first perfected by Margaret Sanger and her coalition of socialists, eugenicists, and white supremacists in the early 20th century.)

The membership of both coalitions overlapped substantially. Both followed the echo chamber deception model, hemming in Congress with an array of special interests meant to mimic a tidal wave of public support for health care and immigration reform.

Both coalitions were heavily funded by Atlantic Philanthropies, a Bermuda-based foundation that poured $27 million into HCAN and $70 million into RIFA and other immigration campaigns from 2004 to 2014.

This was perhaps the ultimate exercise in unaccountable dark money and phony democracy, deploying huge grants from a foundation outside U.S. borders to transform vast swathes of the U.S. economy and its very borders. It attracted almost no attention from the media and zero criticism from supposedly anti-“dark money” liberals.

Although Health Care for America Now kicked the bucket after Obamacare’s passage in 2010, it didn’t stay in the grave for long. Sometime after Trump was elected in 2016, HCAN was resurrected as a project of the Sixteen Thirty Fund, the 501(c)(4) lobbying wing of Arabella Advisors’ $600 million “dark money” empire. This “zombie” HCAN joined Arabella’s other pro-Obamacare projects to savage Republicans in the 2018 midterms for supposedly angling to strip Americans of health care. It staged a July 2017 rally outside the U.S. Capitol during which 155 demonstrators were arrested for unlawful activities in dozens of congressional offices.

The key difference between this undead HCAN and its predecessor is that, as a Sixteen Thirty Fund project, the zombie HCAN doesn’t file IRS Form 990 reports, making the operation even darker than before. Arabella also created the HCAN Education Fund, a new project sponsored by the 501(c)(3) New Venture Fund (Arabella’s flagship nonprofit) to support HCAN’s advocacy.

In the next installment, survey the range of grantmanking by Atlantic Philanthropies.