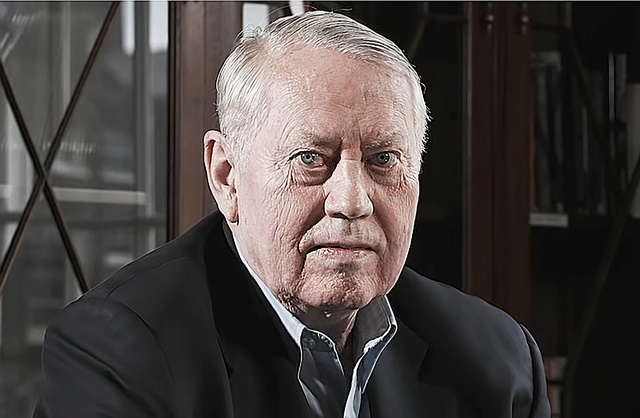 In Chuck Feeney’s eyes, anonymity was key to his success with building the Duty Free Shops business empire, and he applied it to philanthropy by forming Atlantic Philanthropies in 1982 in Bermuda in order to avoid prying eyes—even obtaining a special exemption from the island’s legislature to do so. Credit: Forbes. License: https://bit.ly/3tA7Zq6.
by Hayden Ludwig

“Dark Money” Monster of the Atlantic

Atlantic Philanthropies’ island headquarters gives it critical advantages: Unlike domestic U.S. foundations, it never has to reveal its finances and can grant money to U.S. 501(c)(4) advocacy groups to influence laws and elections.

To be fair, Atlantic Philanthropies does disclose some of its grantmaking on its website. In fact, the group is quite proud of its role in influencing America’s health care and immigration policies and has published lengthy reports on those topics. But Atlantic Philanthropies (collectively called “Atlantic”) is actually a collection of six for-profits and nonprofits, muddying nonprofit watchdogs’ efforts to map out the network and vast influence. A few of these—namely the Bridge Charitable Trust and Atlantic Charitable Trust—have little publicly available information except that they have made charitable donations in the United Kingdom and Bermuda (a British Overseas Territory).

The Atlantic Foundation is the central part of Atlantic Philanthropies and the original grantmaking foundation created in Bermuda in 1984 when Chuck Feeney, co-founder of the Duty Free international retail chain, endowed it with over $600 million he earned from selling the multi-billion-dollar conglomerate. The foundation’s existence was publicly revealed only in 1997, according to the New York Times, “when a lawsuit over the sale of the duty-free shops was about to reveal [Feeney’s] secret gift.”

In 2006, Feeney committed the foundation to spending down its massive endowment by 2020, and the foundation’s latest self-published financial report for 2017–2018 stated end-of-year cash and cash equivalents of just $191,214—an incredible reduction considering its estimated assets in 2001 were a staggering $4.8 billion. By the time Atlantic Philanthropies was set to close at the end of 2020, it claimed it will have paid out $8 billion in grants.

Atlantic Philanthropies also has two U.S.-based nonprofits that file Form 990 reports with the IRS. Despite its name, the Mangrove Foundation is not a foundation, but a 501(c)(4) advocacy nonprofit formed in Bermuda in 1999 with a $60.2 million grant from the Atlantic Foundation, according to its final Form 990 from 2017. Between 2008 and 2017, it paid out $284 million in grants and ceased operations on December 31, 2017.

The Atlantic Advocacy Fund is a New York–based 501(c)(4) and consistently ranks among the left-leaning watchdog OpenSecrets’ top “dark money” donors. (It’s #7 as of writing.) Atlantic Advocacy was also created by a grant from the Atlantic Foundation “because of its commitment to bringing about fundamental change,” in the words of a top Atlantic staffer. Between 2007 and 2018, Atlantic Advocacy paid out $233 million in grants.

In 2014, Atlantic Advocacy formed its own spin-off with at least $50 million in funding: the Civic Participation Action Fund. The fund promotes “progressive policy change that will improve the lives of low-income people of color through advocacy and civic engagement.”

Atlantic Philanthropies’ New Jersey–born founder, Chuck Feeney, is one of the few examples of philanthropists who practice “giving while living,” taking to heed Andrew Carnegie’s warning in his 1889 essay “The Gospel of Wealth” that “the man who dies rich, dies disgraced.”

Feeney committed his foundation to paying out all grants and closing by 2020 to ensure it will not go awry after his death and fund causes he wouldn’t support. In some ways, that makes Atlantic Philanthropies a “picture-perfect” example of a foundation that honors its founder’s original intent for his wealth, writes philanthropy expert Martin Morse Wooster—unlike the Ford and Carnegie foundations, which have abandoned donor intent to pursue other causes. “The donor gets both high grades—for how he gives away his own money—and low grades,” notes Wooster, “for what he spends his money on.”

In Feeney’s eyes, anonymity was key to his success with building the Duty Free Shops business empire, and he applied it to philanthropy by forming Atlantic Philanthropies in 1982 in Bermuda in order to avoid prying eyes—even obtaining a special exemption from the island’s legislature to do so. Feeney’s early grantmaking was focused on Ireland, where he became a dual citizen, soon aligning his personal giving with the U.K.- and U.S.-designated terrorist faction Sinn Fein until an Irish Republican Army bomb in London killed two people and injured 38.

According to scholars, he’s a self-described liberal who opposed the Iraq War and has a “libertarian’s aversion to taxes,” but rarely discusses his politics in public. He wanted his foundation to fund hospitals and universities. But Atlantic Philanthropies shifted toward funding strictly political ventures in the U.S. with the appointment of Gara LaMarche—the former head of George Soros’s Open Society Foundations and an ACLU staffer—as president in 2006. Funding for Health Care for America Now and Reform Immigration for America now followed in 2008 and 2009, respectively.

In 2009, Feeney sent a letter to the foundation’s board criticizing HCAN and other “social justice” grants, but he was ignored. (One board member complained that the real danger facing the foundation was that it could become “too interested in building buildings, research centers, etc.”) The internal war of Feeney’s donor intent that followed should be studied by every philanthropist in America. Critically, it ended with LaMarche’s resignation in 2011 and Feeney’s in 2010, with the promise that the board would honor his intent.

In the next installment, examine how Atlantic Philanthropies bankrolled a massive campaign to change U.S. immigration policy.