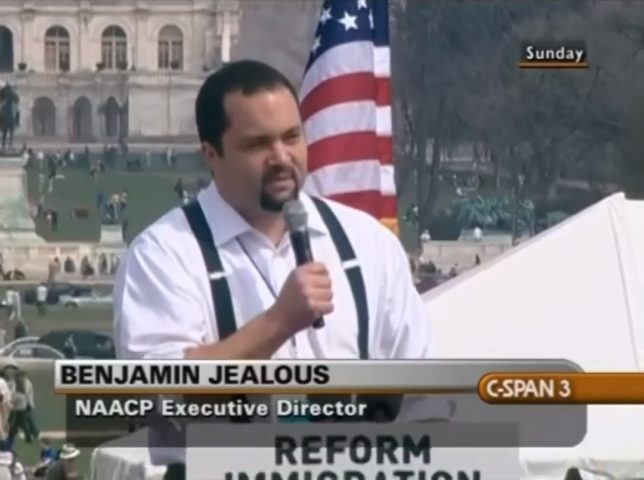 A huge opportunity for comprehensive immigration reform materialized with the Democrats’ nomination of Sen. Barack Obama (D-IL) in the 2008 election, and Atlantic curried the support of Latino voters as well as Latino interest groups to support his election. Democrats swept the White House and Congress, taking 21 House and seven Senate seats from Republicans and seizing control of both houses of Congress. Suddenly faced with an undivided Democratic government and an apparent mandate for sweeping change, Atlantic went all in.

“With then-Senator Obama’s election to the presidency, immigration reform returned to the federal agenda,” Atlantic recalled in its 2015 report. Consequently, the foundation “increased [its] investments” in immigration activism “after high-ranking Obama campaign officials promised to prioritize federal immigration reform legislation.”

In addition to Obama’s support, the fact that both houses of Congress were controlled by Democratic legislators signaled the opening of a very promising opportunity window. Atlantic applied a lot of pressure in the field to concentrate funding within RIFA to lock in federal legislative change as the focus of immigration reform efforts. [emphasis added]

The Bermuda foundation gathered 15 key activists (including Frank Sharry, now leading America’s Voice) who outlined four pillars to their new strategy. Each pillar is more in tune with an election campaign than a charity:

While the objective—amnesty for illegal aliens—didn’t change, the name did, and Reform Immigration for America soon spun off from CCIR (now America’s Voice) as a project of Tides Advocacy, the 501(c)(4) arm of a collection of nonprofits known as the Tides Nexus.

While its predecessor had focused on lobbying, RIFA pursued “civic engagement, voter registration, voter mobilization, community organizing, and other forms of electoral engagement” to create outside pressure on Congress. It was also more partisan than CCIR, shifting “into closer alignment with Progressives and the Democratic Party.”

This change is important. It signals a shift from the founding principal of the campaign to be a non-partisan entity to a new type of advocacy machine rooted in politics to build the necessary power to enable policy change. It also marked a deepened reliance on the part of Atlantic and pro-immigration reform advocates on the Democratic Party—an investment that has yet to deliver on comprehensive immigration reform.

As a Tides project, RIFA never filed annual Form 990 filings with the IRS. Its sole donor, the Atlantic Advocacy Fund, gave Tides $5 million for the project between 2010 and 2012. And its budget, staffers’ salaries, and board oversight (if it had any) were all internal to Tides Advocacy, rendering RIFA a tentacle of Tides and wholly unaccountable to the public while it lobbied for sweeping changes to America’s immigration system.

This writer only discovered RIFA through lobbying filings showing that Tides Advocacy (doing business as RIFA) spent $500,000 lobbying Congress in 2009–2010 for “comprehensive immigration reform,” although the specifics are unknown. It’s also almost the only money Tides Advocacy has spent on congressional lobbying in its nearly three-decade existence, as shown by a query of the Senate’s Lobbying Disclosure Act Database. 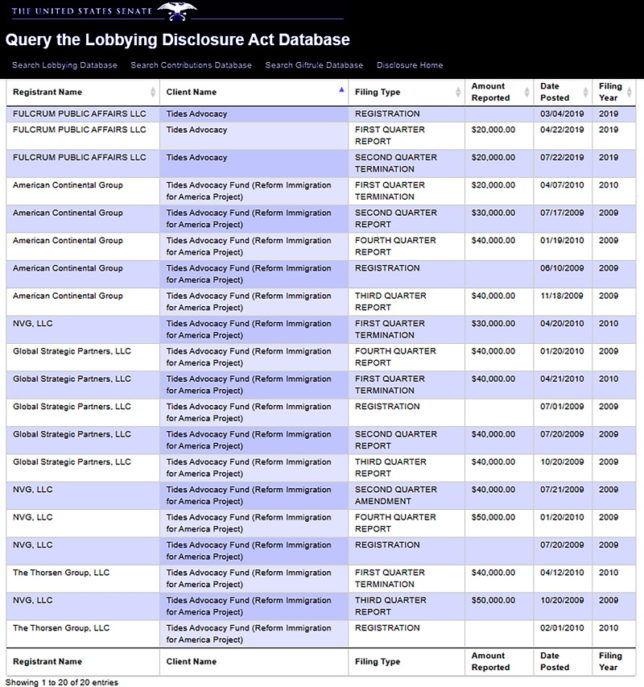 As befits the brainchild of professional activists, RIFA’s pressure campaign was announced in a Huffington Post op-ed by Sharry on July 4, 2009: “President Obama has committed himself to immigration reform and now is the time that we should hold him, members of Congress and ourselves accountable for getting this critical legislation done this fall.”

In June 2009, RIFA held a three-day summit in Washington, DC, to train activists in lobbying and community organizing. It was organized by the Center for Community Change, a CCIR member that absorbed RIFA from Tides Advocacy sometime in early 2010 (according to the group’s archived privacy policy) and controlled it until RIFA’s quiet dissolution in 2018. Representatives from nearly every pro–illegal immigration group and other pillars of the Left were present:

RIFA identified a critical window for passing immigration reform: April 1, 2009, to June 30, 2010, squeezed comfortably between the period when members of Congress were sworn in and would run for reelection. That RIFA failed probably owes much to its direct competition with another single-issue coalition: Health Care for America Now, which Atlantic Philanthropies was heavily funding simultaneously with RIFA.

Considering the scale of both politically fraught issues, health care and immigration, the two echo chambers were almost destined to compete in a zero-sum game. Only a month after Obamacare’s passage in March 2010—itself a gargantuan feat that passed with zero Republican votes—Obama told reporters that there “may not be an appetite” in Congress to tackle immigration that year. The Tea Party’s surge in the 2010 midterms returned a Republican majority to the House and dashed RIFA’s plan.

RIFA was effectively dead (although its website lingered on until 2018), but Atlantic’s larger war continued. RIFA’s final act was conducting “civic engagement work focused on registering more Latinos to vote and getting them to the polls” to support Obama’s reelection in 2012, “studying what does and does not work in regards to Latino voter registration.” That involved gathering 1.7 million email addresses, social media profiles, and phone numbers—usually the lot of politicians’ campaigns and political consultants—which Atlantic Philanthropies says is RIFA’s “main legacy.” Atlantic later bragged about its role in this electoral work:

Earlier in 2012 Atlantic staff had consulted with a wide variety of immigration reform stakeholders . . . and had decided to make a sizeable, $3.9 million short-term investment to promote civic engagement among Latino voters and their allies. The investment was multifaceted, providing support for developing a Latino voter strategy, mobilizing voters across the US, deploying RIFA’s online grassroots organizing capacity to bring attention to the Latino vote, and developing a national media narrative linking the Latino vote to immigration reform.

The goal of the timely cash infusion was to demonstrate the formidable Latino vote and to prove that the immigration reform field had mobilization power that could be brought to bear on federal immigration reform. This effort was thought to impact the Republican Party and cause it to take the issue of immigration more seriously.

Atlantic and others were pleased with the outcome—in fact, the high turn-out of the Latino vote was a top story for many news outlets following President Obama’s reelection. One individual said that “that’s the best role Atlantic can play: to show politicians that the Latino vote has to be reckoned with.” [Emphasis added]

In the next installment, see Atlantic Philanthropies’ third—and final—attempt at comprehensive immigration reform.