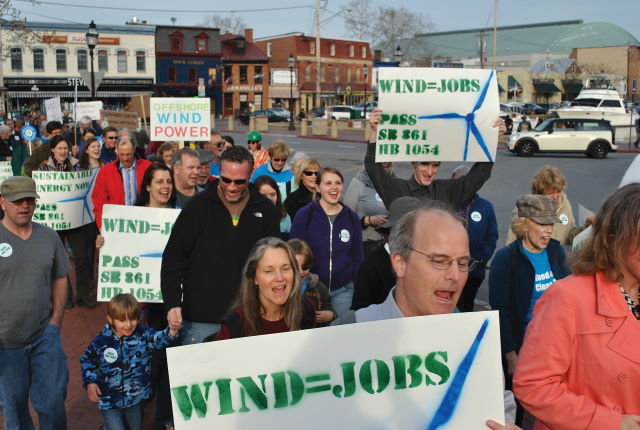 While the idea of a Big Labor–Big Green union is nothing new, the formal BlueGreen Alliance began as a strategic partnership in 2006 between the United Steelworkers of America (USW) and the Sierra Club, the country’s oldest major environmental organization. Credit: chesapeakeclimate. License: https://bit.ly/3mi15nT.
by Hayden Ludwig

Summary: Uniting America’s labor unions and environmentalists has been the dream of the Left for decades: a coalition that can overcome the threat to manufacturing job security posed by anti-carbon radicals. Such has been the goal of the BlueGreen Alliance, which promises to force decarbonization policies on the country’s dwindling unionized workforce in exchange for “green” jobs programs. But the window for passing legislation under the Democratic Congress is fast shrinking given the looming 2022 midterms.

For decades, the Left has sought a marriage between two of its biggest pillars: Big Labor and Big Green. The two are not natural allies. Much of the anti-carbon agenda driving today’s environmentalists promises less industrialization—with fewer factories, cars, and planes—and less reliance on and employment in the global supply chain on which they depend.

On the surface, such a marriage seems destined for divorce. What do blue-collar laborers in the Midwest have in common with blue-blooded eco-activists on the coasts? And why would labor unions that depend on natural gas to fire their furnaces, coal to produce their steel, and oil to power trucks and trains back something so radical as the Green New Deal?

Critics might also point out that President Joseph Biden’s war on the Keystone XL pipeline—a privately financed expansion to an existing pipeline bringing Canadian crude oil to refineries on the Gulf of Mexico—reveals the tensions between union workers and die-hard environmental activists, which will inevitably lead to a breakdown in their alliance. The Keystone XL expansion would have provided numerous high-paying blue-collar jobs to construct and maintain. If the eco-friendly government of Canada—a signatory to the Paris Climate Accord—has approved the pipeline, why can’t American “greens”?

But conservatives should be wary of forecasting the death of the BlueGreen Alliance. Despite tensions, the AFL-CIO, America’s largest federation of labor unions, has announced that it’s making global warming policy a top priority under the Biden administration, seeking federal tax credits for “green” building standards and other union-friendly actions.

Many of the top bills proposed under the Biden administration—including the Green New Deal, infrastructure bill, and proposals for an FDR-style Civilian Climate Corps—are arguably the pinnacle of what any BlueGreen alliance was meant to achieve: a fundamental transformation of America’s energy and economy that puts unions and environmentalists in charge. Under President Biden and a Democratic Congress, they may get their wish.

While the idea of a Big Labor–Big Green union is nothing new, the formal BlueGreen Alliance began as a strategic partnership in 2006 between the United Steelworkers of America (USW), North America’s largest union with 1.2 million members and an AFL-CIO affiliate, and the Sierra Club, the country’s oldest major environmental organization. Their goal was clear: use their combined lobbying power to steer public funds toward renewable energy projects built by unionized workers.

Both groups are highly political and overwhelmingly favor Democrats. In the 2020 election alone USW spent $1.6 million aiding Democrats nationwide, plus another $4.2 million through its associated super PAC, USW Works. Between them United Steelworkers has poured $47 million into politics since 1979.

The Sierra Club spent $7.3 million between its PAC and super PAC in 2020, much of it helping the Biden campaign. Since 1979 the groups have spent $25 million influencing federal elections.

USW is also the second-largest lobbyist among industrial unions, spending $1.3 million in 2020 alone, mostly on bills governing energy efficiency in manufacturing, decarbonization mandates, workers’ rights in NAFTA/USMCA and other international trade agreements, and health care. The Sierra Club has spent close to $7 million lobbying the federal government since 2008, almost all of it in conservation and climate-related bills.

Unions and “green” groups are structured very differently. Big Labor commands a legion of dues-paying members, granting it huge leverage in negotiations where sit-ins and strikes loom large. Environmental groups tend to attract many of the Left’s most devoted activists and persistent lawyers, as well as funding from ultra-wealthy donors like Tom Steyer or the Swiss-born Hansjörg Wyss who are concerned for the planet’s future.

Big Labor has its roots in the 19th century and has always wavered between American patriotism and out-and-out communism, most famously in the merger of the centrist American Federation of Labor and the far-left Congress of Industrial Organizations in the 1950s to form the AFL-CIO. The Big Green ostensibly began in earnest with the conservation work of Theodore Roosevelt and Sierra Club founder John Muir—now ousted by the group he founded for his alleged racism—but it really emerged as the modern activist force we now know in the late 1960s, when Rachel Carson published her famous (and dubiously researched) anti-pesticide book Silent Spring. Since then, the environmentalist movement has bounced between the center- and far-left, espousing an almost religious aversion to “fossil fuels,” nuclear energy, and often humanity itself.

On the surface, their objectives may seem contradictory or at least unrelated. But consider that almost all climate mandates involve massive government spending sprees and regulations restricting how and which kind of products companies may manufacture. Electric vehicles (EV) are a fast-growing commodity, but only one of the three biggest EV manufacturers—Chevrolet—is unionized. Expensive “green” energy will only drive up fuel costs for commuters, encouraging the use of (union-built) public transportation. 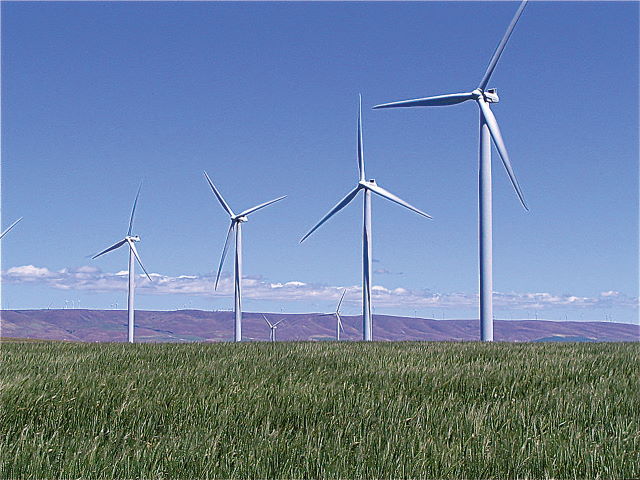 A single wind turbine requires some 550 tons of concrete and 45 tons of steel for the base alone. It’s been estimated that by 2028 the global wind turbine fleet will consume over 5.5 million tons of copper wiring, making it the most copper-intensive form of electricity generation. Credit: Oregon Department of Agriculture. License: https://bit.ly/33JYT27.

Numerous bills proposed in the past year would also subsidize “green” retrofitting for commercial buildings and houses, replacing gas appliances with electric appliances. Because wind and solar are fickle and unreliable energy sources, every solar panel farm and wind turbine requires a natural gas–burning backup plant. This means renewable energy replacement mandates actually increase the total megawatts produced for the U.S. electric grid instead of swapping out one form of electricity production for another, wasting resources. Those same renewables are also incredibly resource-intensive to construct. A single wind turbine requires some 550 tons of concrete and 45 tons of steel for the base alone. It’s been estimated that by 2028 the global wind turbine fleet will consume over 5.5 million tons of copper wiring, making it the most copper-intensive form of electricity generation.

All of that is good news indeed for the unions whose members mine, refine, ship, install, maintain, or replace the products Uncle Sam declares will save the planet from catastrophic manmade climate change.

BlueGreen’s goals outlined in 2019 put infrastructure and manufacturing squarely in the center:

In the next installment, the current BlueGreen Alliance emerged from an older environmental-labor coalition.