Greening the Unions: The Apollo Alliance 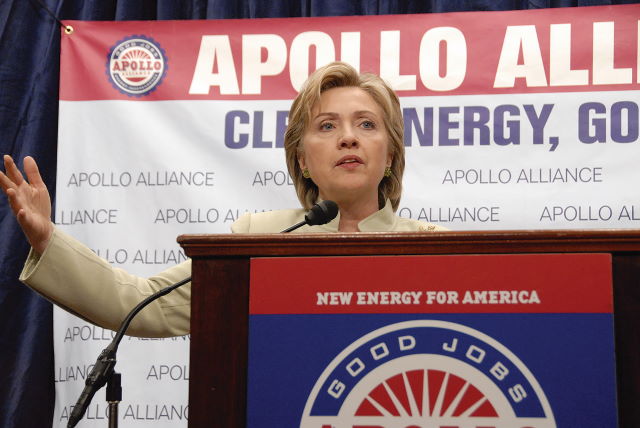 Apollo was birthed in 2004 as a project of the San Francisco–based Tides Center, the arm of the left-wing pass-through Tides Foundation responsible for incubating new groups. Its emergence marked a turning point in the environmental movement, which had started to fizzle out. Credit: Apollo Alliance. License: https://bit.ly/32jPGwt.
by Hayden Ludwig

The current BlueGreen Alliance operates as a pair of 501(c)(4) and (c)(3)—the BlueGreen Alliance Foundation—nonprofits, a common practice among political groups. This modern group was formed from a 2011 merger with a slightly older environmental-labor coalition: the Apollo Alliance.

Apollo was birthed in 2004 as a project of the San Francisco–based Tides Center, the arm of the left-wing pass-through Tides Foundation responsible for incubating new groups. Its emergence marked a turning point in the environmental movement, which had started to fizzle out. At a meeting of the Environmental Grantmakers Association, environmentalists Michael Shellenberger and Ted Nordhaus revealed a shocking report declaring that “environmentalism was dead,” blaming activists for failing to realize a real solution to global warming beyond restricting the world’s access to resources and energy. Shellenberger and Nordhaus saw Apollo as the solution to this stagnation:

Whether or not you believe that the New Apollo Project is on the mark, it is at the very least a sincere attempt to undermine the assumptions beneath special interest environmentalism. Just two years old, Apollo offers a vision that can set the context for a myriad of national and local Apollo proposals, all of which will aim to treat labor unions, civil rights groups, and businesses not simply as means to an end but as true allies whose interests in economic development can be aligned with strong action on global warming.

That project found a home in the Tides Center, which specializes in taking new groups which haven’t yet obtained tax-exempt status under its fold until they’ve become fully fledged nonprofits, at which point they’re spun off. Tides has incubated dozens, perhaps hundreds, of nonprofits this way since the late 1970s.

The coalition’s most lasting impact was crafting the 2008 Apollo Economic Recovery Act, which called for $110 billion in government funding for “green” jobs program. The measure was ultimately folded into the 2009 stimulus bill passed by the Democratic Congress, and Apollo was reportedly so influential in its passage that Senate Majority Leader Harry Reid (D-NV) credited it “in helping us develop and execute a strategy that makes great progress on these goals.”

Since the group’s merger into the BlueGreen Alliance in 2011, it has picked up support from the Natural Resources Defense Council (NRDC), Union of Concerned Scientists, and various labor unions. The group’s current membership roster represents what one might term the “professional” environmental movement, including more litigation and lobbying giants than wild-eyed 1960s throwbacks like 350.org and Greenpeace.

But make no mistake, these groups are extreme. One National Wildlife Federation vice president Tracy Stone-Manning once worked for and covered up the actions of the eco-terrorist group Earth First!, which hammered hundreds of metal spikes into trees at logging sites across Oregon. When a logger’s chainsaw hits a spike, it can maim or kill the logger. Biden nominated Stone-Manning as head the Bureau of Land Management, and she was confirmed in September 2021, putting her in charge of America’s vast public forests and parks.

The League of Conservation Voters (LCV) spends so heavily supporting Democrats each election cycle that it’s earned a reputation as a “’dark money’ heavyweight” by the left-leaning Center for Public Integrity. LCV strongly supports a federal tax on carbon dioxide emissions to halt global warming, which would raise the price of almost every commodity and utility in the country.

Predictably, this alliance presents as many problems as it does solutions. The Laborers International Union of North America (LIUNA), a major labor group, quit the alliance in 2016 over the latter’s opposition to the Keystone XL natural gas pipeline.

The coalition’s finances have somewhat stagnated over the years, too. In 2010 the (c)(4) arm reported record high revenues of $3.9 million. That same year it spent millions of dollars lobbying on climate change bills and the Democrats’ proposed union card check bill. In recent years the (c)(4)’s revenues have rarely exceeded $1.6 million, although the (c)(3) BlueGreen Foundation regularly brings in between $4 and $6 million annually.

The top donors to the coalition include the Hewlett Foundation, the philanthropy of the late co-founder of Hewlett-Packard; the Energy Foundation, a bundler formed by various foundations to support environmental groups; the MacArthur Foundation; the Sierra Club; and a number of unions, including the AFL-CIO. Interestingly, in 2010 the BP Foundation donated $50,000 to the BlueGreen Alliance, the same year BP (formerly British Petroleum) had the infamous Deepwater Horizon oil spill in the Gulf of Mexico.

In the next installment, the BlueGreen Alliance geared up for expansion under President Biden.