Greening the Unions: Pushing Climate Legislation Further to the Left 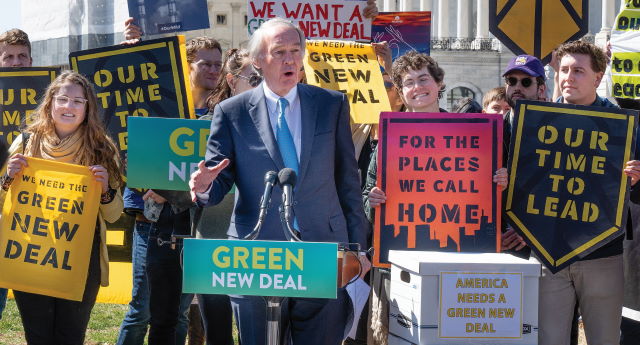 Why would labor unions that depend on natural gas to fire their furnaces, coal to produce their steel, and oil to power trucks and trains back something so radical as the Green New Deal? Credit: Victoria Pickering. License: https://bit.ly/33N5lFH.
by Hayden Ludwig

But the BlueGreen Alliance is gearing up for expansion under President Biden. In January 2021, it was reported that the coalition is hiring for 11 new positions, including field organizers and a campaign manager. It’s clear the group sees opportunity under Biden, who was the first candidate endorsed by BlueGreen. The Biden administration is already the most extreme on climate in American history, exceeding even Obama. The Biden campaign website promises to “make environmental justice a priority across all federal agencies” and “hold polluters accountable”:

On Day 1, Biden will require public companies to disclose climate-related financial risks. . . . In his first year, he’ll work to enact legislation requiring polluters to bear the full cost of their climate pollution. But that’s not all: Biden will direct his EPA [Environmental Protection Agency] and Justice Department to pursue these cases to the fullest extent permitted by law and . . . seek additional legislation to hold corporate executive personally responsible—including jail time when merited [emphasis added].

Climate groups have been vying to take the lead in shaping Biden’s environmental agenda prior to the 2022 midterm elections, when Democrats may lose control of one or both houses of Congress. BlueGreen wants net-zero greenhouse gas emissions by 2050—“but not necessarily end the fossil fuel industry itself, with its tens of thousands of high-paying jobs,” according to The Intercept. Predictably, that concession to the fossil fuel industry has drawn criticism from the most extreme eco-activists, including Friends of the Earth.

Unlike the far Left, BlueGreen supports carbon capture and storage techniques—an expensive technology that allows companies to pull carbon dioxide from the atmosphere and bury it—which is also favored by right-leaning environmental groups. Biden supports federal subsidies for carbon capture, which was included in the Green New Deal (despite radical criticism).

But the Green New Deal is controversial among union workers. In 2019, BlueGreen founding director David Foster (a United Steelworkers officer) wrote this of the legislation:

Unfortunately, to America’s 75,000 nuclear power plant workers, who produce 20 percent of the country’s electricity, all of it carbon-free, [100 percent renewable energy] sounds more like a declaration of war. And to the country’s 600,000 employees in the natural gas industry whose growth in the last decade, displacing coal as the primary fuel for electricity, is the single largest reason that US carbon emissions have dropped during most of the past decade, it sounds like an assault on their living standards.

But the BlueGreen Alliance is hardly moderate, criticizing the 2021 infrastructure bill for its compromises with Republicans by calling the $600 billion proposal “watered down” and with fewer union handouts compared to its original $1.7 trillion. “None of the proposals we’ve seen emerge from bipartisan negotiations come close to meeting the mark on jobs, climate or justice,” the group’s current executive director, Jason Walsh (a former Obama administration staffer and environmental activist), told Reuters. “It’s time to move on.”

Don’t Count On a Collapse—Yet

All of this points to underlying tensions between the “greens” who want a carbon-free economy (if such a thing were even possible) and the workers who rely on carbon-based energy to do their jobs. Unity comes cheap when faced with a common enemy under a Republican president or Congress, but can that marriage be sustained when real policy victories are on the line? That Unity may fray even more with the Build Back Better Act (H.R. 5376) apparently dead in the Senate after the House passed it in November.

Union desperation, not affinity, may be the decisive factor. Membership rates for private-sector unions fell by 428,000 in 2020 (out of 7.1 million members), less than half of what it was in 1983. That decline makes the “blue” half of BlueGreen less and less influential in the alliance, certainly given activists’ influence over the most pro-environmentalist administration in U.S. history. Simply put, America’s biggest labor unions can’t afford not to toe the “green” line.