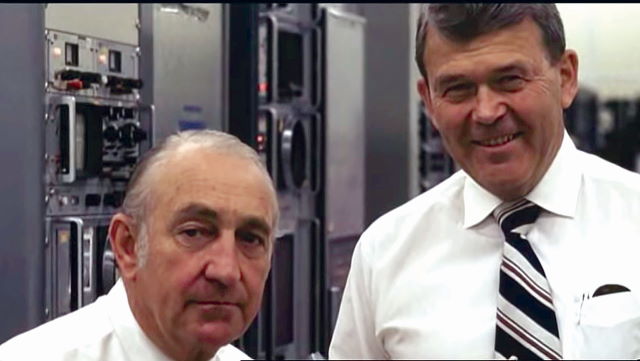 William Hewlett and David Packard are the co-founders of Hewlett-Packard (HP Inc. since 2015) and the founders Hewlett Foundation and Packard Foundation. Credit: EEVblog2. License: https://bit.ly/3bhb6ez.
by Hayden Ludwig

The Energy Foundation is unique as a massive pass-through funder endowed by liberal mega-donors to provide a new source of perpetual funding for the environmental Left. As its name suggests, the Energy Foundation started life as a bona fide foundation but in 2009–10 transitioned into a 501(c)(3) nonprofit, perhaps due to the tax advantages of a public charity compared with a foundation and the prerogative to not report its donors (only the sum of their donations).

According to a report by Duke University’s Center for Strategic Philanthropy and Civil Society, the group had three founding “strategic assumptions”:

“There are many examples of this [policy] success,” notes the Duke report:

In the mid-1990s, for instance, the Foundation initiated six regional campaigns to promote the use of renewable energy. To date, sixteen states have adopted renewable portfolio standards mandating varying minimum levels of renewable energy use by power companies. In fifteen of these states, the standard can be traced directly to the Energy Foundation campaigns. Energy Foundation research, analysis, and education efforts contributed in the early ’90s to the adoption in California of tough new regulations for low-emissions vehicles. And in 2002, the California State Assembly passed AB 1493, the first bill to regulate, at the state level, air quality standards above and beyond the federal standards [emphasis added].

As one would expect, the Energy Foundation is headed by a professional environmental activist, Jason Mark, who worked for over a decade at the far-left Union of Concerned Scientists (UCS), which lobbied for the Paris Climate Accord and its 1990s predecessor, the Kyoto Protocol. UCS pushes scientism, not science—CRC senior fellow Steven J. Allen has called it a “science-themed political group”—and emerged from the 1960s radicals who refused to do any classified research or work for the “imperialist” American government.

The Energy Foundation’s Chinese arm is headquartered in Beijing, obscuring its finances and activities–which are reportedly focused on expanding wind and solar energy production in the communist country. Its board, however, consists of at least one former Chinese government official.

As with the Sea Change Foundation, the 2014 Senate Committee on Environment and Public Works report identified the Energy Foundation as the “quintessential example of a pass-through” organization.

Between 2001 and 2018, the Energy Foundation paid out an impressive $1 billion in grants, much of it supplied by mega-foundations such as the William and Flora Hewlett Foundation ($319 million), the Sea Change Foundation ($106 million), and the David and Lucile Packard Foundation ($84 million).

Some of the grants benefiting the Energy Foundation are explicitly tagged for “advocacy,” such as a cool $15 million from the MacArthur Foundation in 2017 earmarked “in support of state-level advocacy for clean energy policies” (Because the Energy Foundation is now a 501(c)(3) public charity, it can spend more on lobbying than it could as a foundation.)

The pattern here is policy. The American Council for an Energy Efficient Economy (2018 revenues of $11.7 million)—also a Sea Change Foundation grant recipient—is a policy shop created in 1980 to lobby against U.S. dependence on foreign oil that’s since morphed into a global warming group.

The Environmental Law and Policy Center of the Midwest (2018 revenues of $7.5 million) is a nonprofit legal group that litigates for liberal policies, bragging on its website that it’s helped close over 110 coal plants in the Midwest, drive renewables mandates, and shut down highway construction and expansion (what the group calls “boondoggles”).

Environment America (2018 revenues of $18.3 million) is the center of a sprawling eco-advocacy and canvassing operation vital to the Left’s get-out-the-vote and fundraising operations: The Public Interest Network. As my colleague Michael Watson and I exposed in 2018, this “liberal sweatshop” network—better known for its Public Interest Research Groups, or PIRGs—dates back to the 1970s and farms out poorly paid, clipboard-carrying grunts to fundraise for nonprofit groups like the Human Rights Campaign and the Southern Poverty Law Center in exchange for a cut of the proceeds. Environment America leads the “green” wing of this enormous pyramid, lobbying for environmental regulations and global warming bills (including the Democrats’ failed 2008 cap-and-trade bill).

But it’s the Energy Foundation’s 501(c)(4) “sister,” the Energy Action Fund (formerly the Green Tech Action Fund), that deserves even greater scrutiny. Between 2008 and 2018 the foundation passed $17.3 million to its advocacy arm, which paid out over $46 million in grants over that same period. Most of the other donors to the Energy Action Fund are unknown, but they include the “dark money” Sixteen Thirty Fund, Climateworks Foundation, and NEO Philanthropy Action Fund—all top pass-throughs.

The Energy Action Fund’s own grants share a common policy thread. Its latest Form 990 notes part of its expenses went to providing “strategic consultation on state campaigns to advance clean energy solutions.” And its recipients (between 2008 and 2018) reflect the 501(c)(4) advocacy side of the Energy Foundation’s grant recipients, including :

The League of Conservation Voters (2018 revenues of $65 million) is one of the largest lobbying groups on the eco-Left, trying to halt offshore oil drilling in the Arctic, denouncing Republican leadership as “radical” for lifting the country’s 40-year oil export ban in 2016, and pushing for Obama’s Clean Power Plan. Under the Clean Power Plan, electricity would “necessarily skyrocket” by as much as 250 percent, according to the then-Illinois senator on the 2008 campaign trail.

As its name suggests, BlueGreen Alliance (2018 revenues of $1.7 million) is a collaboration between Big Labor and Big Green, formed in 2006 by the United Steelworkers and the Sierra Club. While the coalition has diminished in recent years, it was a lobbying powerhouse during the Obama years, reportedly spending close to $4 million on climate change bills and a “card check” bill that would have made it easier for unions to unionize workplaces.

In the next installment, look at ClimateWorks, perhaps the single largest funder of the environmental Left.