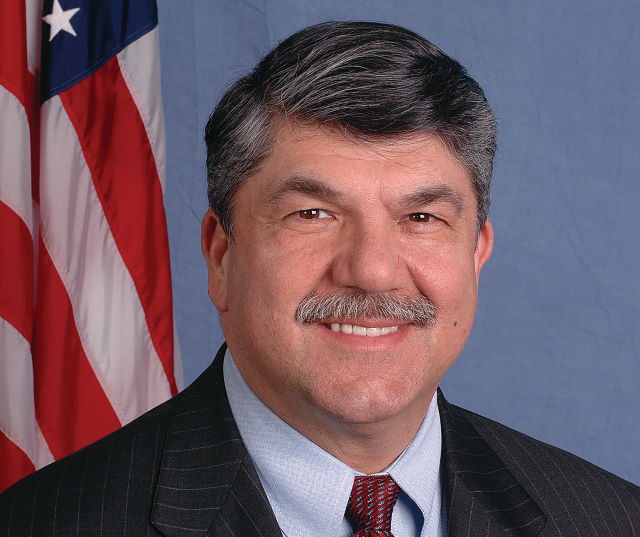 Since Democratic Socialists of America member and former SEIU head John Sweeney (not shown) and his lieutenant, controversial United Mine Workers official Richard Trumka, took over the AFL-CIO in the mid-1990s, the alliance with the Left has likely never been closer. Credit: AFL-CIO. License: https://bit.ly/37nxQbA.
by Michael Watson

The alliance between organized labor and the Left has likely never been closer.

Monopoly Bargaining for the Left. Organized labor and the Left have been allied since the New Deal gave organized labor monopoly bargaining power and the Congress of Industrial Organizations rewarded FDR’s allies with the support of a brand-new political innovation: The CIO-PAC, the first political action committee. While the alliance has sometimes been strained (as it was in 1972, when staunch Cold Warrior leadership of the AFL-CIO refused to endorse Democratic nominee George McGovern for president), it has never broken.

Since Democratic Socialists of America member and former SEIU head John Sweeney and his lieutenant, controversial United Mine Workers official Richard Trumka, took over the AFL-CIO in the mid-1990s, that alliance has likely never been closer. But the alliance has not yet solved labor’s biggest problem: the secular decline in union membership.

In the early 2010s, the AFL-CIO hatched a plan to reinvigorate itself: formal partnerships, possibly including full AFL-CIO membership status, for left-progressive groups outside traditional labor. Among the groups named were the Sierra Club, the prominent environmentalist group; the NAACP, the union-funded left-leaning African American interest group; and MomsRising, a left-wing mothers’ organizing group.

While these formal link-ups never completed, Big Labor’s institutional and alumni-network linkages with the rest of the Left propagate an ideology sometimes called “social justice unionism.” In social justice unionism, rather than focusing advocacy on members’ economic status or even broader social-democratic welfare-state policy, the union movement aligns with full-spectrum liberalism to an even greater degree than that normally indicated by coalition politics.

Even the ostensibly economic benefits to Big Labor cannot be examined outside the context of “social justice unionism.” As the actions taken by the NewsGuild chapters at Chicago Tribune and New York Times against tough-on-crime writer John Kass and the editors who printed a tough-on-rioters op-ed by Senator Tom Cotton (R-AR) demonstrate, Big Labor, especially in “woke” industries, will use its power for social-liberal ends. Those who hope to divide organized labor from “woke capital” will be rudely awakened to the fact that institutional labor unions are more likely to be woke management’s combat groups than resolute defenders of political dissenters.

A long-standing goal of some Republican activists is to split organized labor from the Democratic Party. By that they mean the institutions with glassy headquarters in Washington, DC, not just the substantial faction of between a third and two-fifths of union families who have repeatedly demonstrated that they will vote for Republican candidates. However, it is fool’s gold, and social justice unionism explains how and why.

For example, the International Brotherhood of Teamsters has long been a target for Republican outreach because of its political independence during its Mob-compromised period. Both George W. Bush’s and Donald Trump’s campaigns reportedly solicited the union’s endorsement. Both were rebuffed. At least part of the reason must be the Teamsters’ long-standing partnership with the left-wing SEIU in Change to Win, a “strategic organizing center” originally founded in the mid-2000s to rival the AFL-CIO for the leadership of the House of Labor. (It didn’t.)

Similar proposed cleavages to split labor from the Left also fall before the power of social justice unionism. Environmentalist objections to building projects, most notably the proposed Laborers’ Union–built Keystone XL Pipeline, are presented as such a cleavage. But while the union may occasionally object that the leopards are eating their faces, the Laborers’ Union’s principal objective is preserving its power—and the Democratic Party is happy to oblige, not least by placing a Laborers’ man as U.S. secretary of labor. The complaints about the Biden administration cancelling Keystone are vanity, not serious divisions between Big Labor and its Democratic patrons.

The Biden administration is already being described as so pro-Big Labor that unions “may never enjoy a more favorable climate in Washington than now.” With that Big Labor ascendancy in the government and conservatives debating among themselves the merits and consequences of becoming a supposed “workers’ party,” coming to terms with the organized labor agenda is crucial.

As has been demonstrated, that agenda—codified in the PRO Act introduced by Democratic congressional leadership and endorsed during the 2020 campaign by President Biden and Vice President Harris—is awful for workers, awful for businesses, awful for consumers, and awful for the country.

Unions seek to import the Three Bigs model of Big Business, Big Government, and Big Labor working in concert from the past into the modern economy through coercive precedents no one bothered to question until Big Labor demanded the Obama administration do so. Knowing that the power to destroy civic life and ruin the economy would give Big Labor and its left-wing allies a chokehold on the nation, unions demand removal of important checks on their institutional power—checks that were created after wanton abuses of those powers.

The Big Labor that the Biden administration would empower is an ally of the full-spectrum “woke” Left, not a candidate for a working-class conservatism to court or a defender of rank-and-file workers.