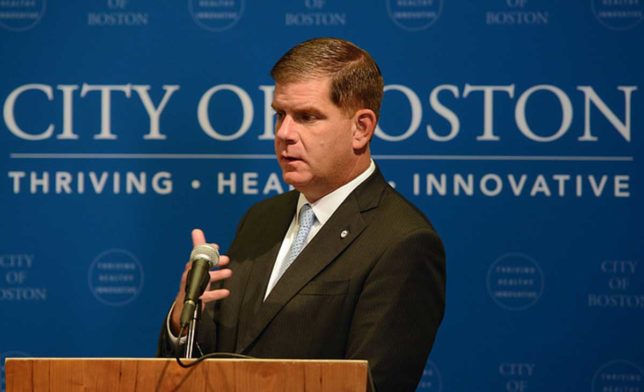 Despite the protestations of “labor conservatives,” Big Labor and the Democratic Party are intimately intertwined. The new Biden administration’s nominee for Secretary of Labor illustrates this reality perfectly. President Joseph Biden has nominated Martin J. Walsh, the Democratic mayor of Boston and a former building trades union official, to take the post.

Walsh is through-and-through Big Labor man—and Big Labor is his family business. His father John and his uncle Pat built Laborers Local 223, a builders’ union in the Boston area, into a political powerhouse, which observers credited with accelerating the political career of left-wing academic-turned-politician Elizabeth Warren into a U.S. Senate seat.

An obituary-eulogy for Pat Walsh in the Dorchester Reporter (the neighborhood paper for the Walsh family’s Boston home turf) characterized the Walshes as “a throwback-in a good way” to old-fashioned organized labor and hailed Laborers 223 as “the Irish union.” Marty Walsh led Laborers Local 223 even while serving in the Massachusetts State Legislature from 1997 until 2013.

And Martin Walsh still leads Laborers 223—it’s just a different Martin, one of the mayor’s relatives. His cousin (Pat’s son), also named Martin, is the union’s business manager. He’s not the only Walsh still tied to the union: Department of Labor reports show that Pat and Colleen Walsh (a report in Irish Echo showed Martin Walsh had children by those names) are the union’s president and office manager, respectively.

But Martin J. Walsh had further to rise in the family industry. While serving as a Massachusetts State Representative, he took the reins of the Boston Building Trades Council, the coalition of building trades unions for the Greater Boston area. Big Labor must have been satisfied with his legislative work; numerous unions funded his campaigns.

Then in 2013, Walsh won the Boston mayoralty with the institutional backing of Big Labor—so much institutional backing, it got Big Labor’s front groups into trouble. One Boston and One New Jersey, front groups for the American Federation of Teachers that provided outside expenditure support to Walsh’s campaign, agreed to pay a $30,000 settlement with the state of Massachusetts to dismiss alleged violations of state campaign finance laws.

The incoming Biden administration has now nominated Walsh for Secretary of Labor. Looking at Walsh’s career, the support that Biden’s campaign received from organized labor, and the history of Democratic secretaries of labor, the message could not be clearer: The Biden Labor Department will work at the direction of and for the interests of Big Labor, regardless of whether such actions benefit the American worker or America.