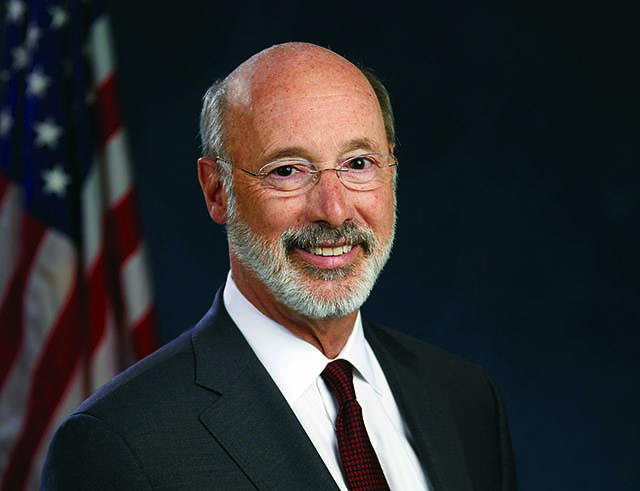 Since Pennsylvania Gov. Tom Wolf first issued the executive order in October 2019 directing his environmental department to take steps to join RGGI, he has invoked the notion of a “scientific consensus” devoid of any real debate on the question of climate change, its causes, and impacts. Credit: Governor Tom Wolf. License: https://bit.ly/3gxYwLH
by Kevin Mooney

Summary: What happens next in Pennsylvania’s legal and legislative battles over proposed climate change regulations will largely depend on who controls the narrative about carbon dioxide emissions and their impact. Since the scientific and environmental justifications that government figures have used to rationalize restrictions on energy production have been called into question during legislative hearings, opponents have been making the case that the costs of mitigating carbon dioxide emissions far outweigh any theoretical benefits. In particular, Gov. Tom Wolf (D) and his administration have responded with predications of climatic catastrophes.

What happens next in the legal and legislative battles over proposed climate change regulations in Pennsylvania depends in large part on who controls the narrative about carbon dioxide emissions and their impact. Since the scientific and environmental justifications that government figures have used to rationalize restrictions on energy production have been called into question during legislative hearings, opponents have been making the case that the costs of mitigating carbon dioxide emissions far outweigh any theoretical benefits.

Meanwhile, the Power PA Jobs Alliance, a broad coalition of labor and industry leaders, has emerged to highlight the dangers of unconstitutional, unilateral executive actions that could impose carbon taxes that would undermine the economy, eliminate energy-sector jobs, and raise consumer prices. With a potentially decisive vote pending in the state’s General Assembly and a decision pending before an independent regulatory commission this September, it’s not at all certain that Pennsylvania will become part of the Regional Greenhouse Gas Initiative (RGGI). RGGI, a multistate “cap and trade” agreement that sets limits on CO2 emissions, currently includes 11 states in the Northeast and Mid-Atlantic regions.

In testimony before Pennsylvania’s House of Representatives, David Stevenson, director of the Center for Energy and Environment at the Caesar Rodney Institute in Delaware, encouraged policymakers to learn from a neighboring state’s experiences with RGGI. Stevenson points to his own study and others that show RGGI has raised electricity rates where it has been implemented without any discernable climate benefits. He also told lawmakers that thanks to the switch from coal to natural gas Pennsylvania has already made significant progress in reducing CO2 emissions through private-sector innovation without government intervention.

“Pennsylvania doesn’t owe anybody an apology about the carbon dioxide they are emitting at this point,” Stevenson said in his testimony. “They have done more for this country to reduce carbon dioxide than any other state.” But he also warned that Pennsylvania would lose energy-intensive businesses just as Delaware has if the state joins RGGI.

For Pennsylvania residents and business owners still reeling from the health and economic effects of COVID-19, raising energy prices in the short term to combat climate change over the long term is not an easy sell. That might be why Gov. Tom Wolf (D), who leaves office on January 17, 2023, and his top administration officials have repeatedly told the public that climate change associated with human CO2 emissions is already harming their state and that the effects will only accelerate over time.

“On our current path, the Pennsylvania our children and grandchildren inherit will be very different from the one we grew up in and continue to enjoy today,” Wolf said in a press statement announcing the release of the Pennsylvania Climate Impacts Assessment 2021, which is laced with dire forecasts.  “We simply cannot afford to ignore the warning signs, and this report underscores the critical need to take action to reduce emissions and do our part to address climate change.”

Patrick McDonnell, Wolf’s secretary of the Department of Environmental Protection, followed up by pointing to data that already suggest palpable signs of the ill effects of climate change: “Data show that Pennsylvania’s average temperature has been rising, heavy rainfall events are increasing, and these climate changes will continue with considerable impact on our lives and economy by midcentury.” He added, “Reducing greenhouse gas pollution must be done quickly to stave off the most dire impacts of climate change.”

But with just one more full year in office, a few questions come to mind that complicate Wolf’s pursuit of burdensome regulations: What does the science actually say about CO2 and climate? How do Wolf’s predications of climatic catastrophes and extreme weather hold up under fresh research? What is the economic fallout from RGGI? And what are the environmental and health benefits if any?

In the next installment, learn how a Virginia-based nonprofit challenged the data and findings in Pennsylvania’s Climate Action Report.