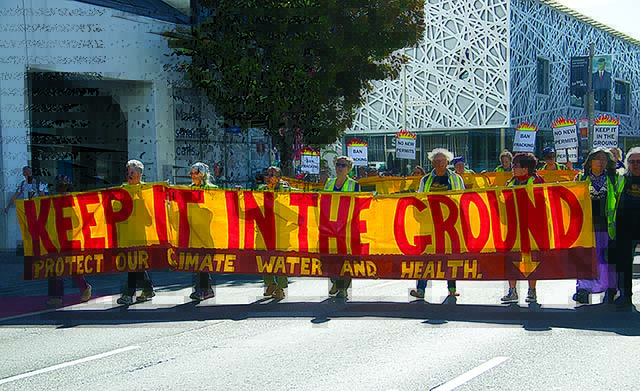 So then, what exactly is the point of RGGI if it’s not going to impact the climate?

The Institute for Energy Research, a nonprofit group based in Washington that supports free-market policies in the energy sector, has collected data on one of the most important, but unheralded geopolitical developments in decades. In 2019, the U.S. become energy independent for the first time since 1957. That’s partly because innovative drilling techniques like hydraulic fracturing, also known as fracking, made it possible to access large deposits of oil and gas in places like the Marcellus Shale, a geological formation of sedimentary rock, that cuts across a large portion of Pennsylvania. The U.S. Geological Survey estimates that the Marcellus Shale contains about “84 trillion cubic feet of undiscovered, technically recoverable natural gas and 3.4 billion barrels of undiscovered, technically recoverable natural gas liquids.”

Hydraulic fracturing used in combination with horizontal drilling has made it possible for the U.S. to access oil and gas reserves that were previously locked away in shale and other tight-rock formations.” Often vilified by self-described environmentalists, fracking exercises have a very small footprint in comparison to the logistics involved with acquiring rare earth minerals used in wind turbines, solar panels, and electric vehicles. This much was made clear in a 287-page International Energy Agency report “The Role of Critical Minerals in Clean Energy Transitions.”  What the Biden administration in Washington, DC, and the Wolf administration in Harrisburg describe as clean and green is not so clean and green.

On the political and economic front, the proposed transition away from fossil fuels toward so-called renewables could sabotage America’s hard-earned energy independence. “U.S. energy production in 2019 was higher than U.S. energy consumption for the first time in 62 years,” Institute for Energy Research reports. “One can thank the oil and gas industry and its use of hydraulic fracturing and horizontal drilling for that milestone as production in those industries increased a combined 11 percent in 2019. Total U.S. energy production increased by 5.7 percent in 2019 while U.S. energy demand decreased by 0.9 percent.”

Foreign powers like Russia and China, which would like to constrain American energy production and by extension American military power, are not exactly keen on the idea of American energy independence and what the Marcellus Shale Coalition aptly describes as the “Natural Gas Revolution.” The nonprofit, Pittsburgh-based group, which coordinates support among energy companies for natural gas development in the Marcellus Shale, has circulated statistics highlighting the economic and environmental benefits of natural gas. The natural gas industry has supported hundreds of thousands of jobs in Pennsylvania while contributing $45 billion to dollars to the commonwealth’s economy and boosting annual household income by $1,200, according to the coalition. 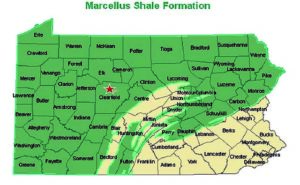 The Marcellus Shale, a geological formation of sedimentary rock that contains large deposits of oil and gas, cuts across a large portion of Pennsylvania. Credit: Elias Schewel. License: https://bit.ly/3kietX6.

During the public comment period on RGGI regulations, which ended on January 14, the coalition challenged the modeling methods of the commonwealth’s environmental department, claiming that it used “inaccurate baseline emissions data to justify purported benefits of RGGI participation.”

The coalition pointed to “significant” environmental improvements made possible through “free market innovations,” which it says the Wolf administration has ignored. “From 2005 through 2017, Pennsylvania’s share of electricity from natural gas increased from 5% to 34%, resulting in a 39% decrease of CO2 emissions during this same time-period,” the coalition says in its comments. “Furthermore, as measured from 2008 (the year before RGGI’s first full compliance year), Pennsylvania has achieved a cumulative reduction of 184 million tons of CO2 emissions.”

Put simply, natural gas is one of the greenest form of energy available today. But that’s not what environmental advocacy groups like the Sierra Club and the Natural Resources Defense Council (NRDC) have told elected officials during public hearings in the Pennsylvania state legislature or in their many press statements (here for NRDC and here for Sierra Club). They continuously vilify fossil fuels and the American oil and natural gas industry. An attorney with the NRDC participated in the June 2021 House hearings, while the Sierra Club testified before the state Senate just last year. Both environmental advocacy groups have come under congressional scrutiny for allegedly colluding with Russian interests to block American energy development. The NRDC has also been the subject of congressional investigations probing the relationship between green advocacy groups and China. As previously reported, members of Congress sent letters to the NRDC, Center for Biological Diversity, Earthjustice, and the World Resources Institute asking about their relationship with the communist regime in Beijing. In their letters, congressional figures also asked if the nonprofit advocacy groups were in compliance with the Foreign Agents Registration Act.

Whether or not green advocacy groups are explicitly taking stage direction from America’s strategic adversaries, they are advancing policies that put the U.S. at a disadvantage in accessing reliable and affordable domestic energy supplies while enabling Russia and China to double down on oil, gas, and coal resources.

Meanwhile, as also previously reported, green activists backed by tens of millions of dollars in grants from left-leaning foundations from inside and outside of Pennsylvania, continue to advocate for Pennsylvania joining RGGI. They also give political cover to Wolf and other elected officials who do their bidding. This might help to explain why Pennsylvania’s executive agencies have continued full speed ahead on anti-CO2 initiatives despite the growing body of scientific, economic, and environmental evidence that debunk the Wolf administration’s climate scare campaigns.

Just a few days before the July House hearings, Pennsylvania’s Environmental Quality Board (EQB), a 20-member board charged with promulgating the Department of Environmental Protection Agency’s regulations, voted in favor of adopting rulemaking that would establish the “cap and trade” program that would enable the commonwealth to participate in RGGI. A press release from the EQB explained:

The EQB board members make no mention of the progress Pennsylvania has already made in terms of reducing CO2 emissions without joining RGGI. So Sen. Gene Yaw, Republican chairman of the Senate Environmental Resources and Energy Committee, did it for them:

Yaw also raised several questions in his release about RGGI that the EQB left unanswered: “How is this going to impact industry? How many jobs will be lost? What are the impacts on ratepayers?”

In the next installment, review the constitutional problems with Gov. Wolf’s efforts to bring Pennsylvania into the Regional Greenhouse Gas Initiative.