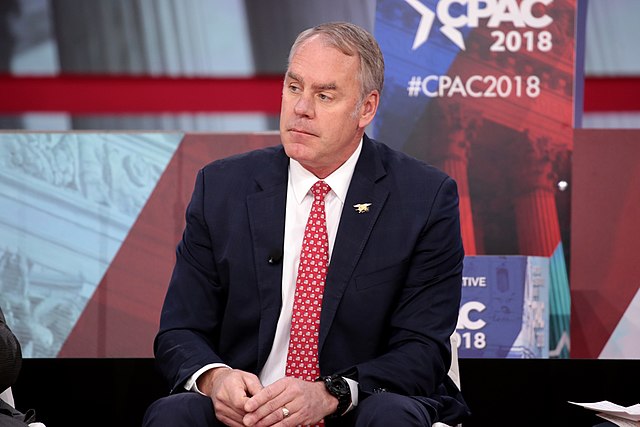 Harried Until the End

WVP filed another five FOIA requests against the Department of the Interior between 2019 and 2020, almost certainly with the intent of discovering ammo for future ethics complaints. Among its requests were all communications between the department and Bernhardt’s former clients from Brownstein Hyatt and the Westlands Water District as well as copies of “all text messages sent by Secretary David Benhardt from July 1, 2017,” through February 2020. The leftist website Outside Online even set up a “David Bernhardt Scandal Tracker” days after his confirmation.

But much of the Left’s campaign shifted to halting Trump’s supposed war on public lands until he left office in January 2021. “Yes, Trump really is coming to take your public lands,” WVP howled in late 2019, claiming the administration was selling off federal land to oil interests bent on pillaging it. In reality, the Bureau of Land Management (which is part of the Interior Department) continued to lease lands to drilling companies in 5–10 year options, a decades-old practice. As a result, oil and gas production soared in 2019, particularly in New Mexico and Wyoming, which sit atop massive deposits.

The Department of the Interior disbursed a staggering $11.69 billion to the states in 2019 alone from energy production on federal and Indian-owned lands, a $2.76 billion increase over 2018. Gasoline prices dropped from a nationwide average of $2.813 in 2018 to $2.691 in 2019 to $2.258 in 2020. And the United States achieved energy independence in 2019, with energy production exceeding consumption for the first time since 1957. In a single year, energy production increased by an impressive 5.7 percent, with so-called fossil fuels accounting for 80 percent of all energy production and consumption that year.

WVP harried Trump and his cabinet out of office, blasting “Secretary David Bernhardt’s Wildly Destructive Track Record” in December 2020—which included such silliness as staging Trump’s May 2020 Fox News town hall inside the Lincoln Memorial, allowing national parks to be used as “centerpieces” for his reelection campaign, and holding “expensive military-infused Independence Day rallies on the National Mall” (the horror!).

Targeting Trump’s energy and environmental policies were among Biden’s first moves in office. Biden cancelled a planned expansion to the Keystone oil pipeline (Keystone XL or “export limited”), pledged to protect 30 percent of U.S. land and water by 2030, and froze new leases for oil and gas development on federal land.

Biden’s nominee for the department, Rep. Debra Haaland (D-NM), was confirmed in March 2021 on a nearly party line vote (four Republicans joined with every Democrat in the Senate). Haaland has been criticized by conservatives as a far-left extremist with a perfect 2020 score and 98 percent lifetime score from the League of Conservation Voters, which ranks politicians for their fidelity to leftist environmental legislation. (Incidentally, Haaland received a 100 percent score from the pro-abortion groups Planned Parenthood and NARAL Pro-Choice America.) While Haaland told Congress during her confirmation process that fossil fuels “will continue to play a major role in America for years to come,” she’s a global warming ideologue who trumpeted “keep fossil fuels in the ground,” voting “against all new fossil fuel infrastructure,” and transitioning to “100% clean energy” in her 2018 reelection campaign.

In May, the Biden administration proposed ramping up the Interior Department’s 2022 budget by $2.5 billion (17 percent) to $17.6 billion in order to “address the climate crisis” and create “good-paying union jobs.” Biden wants to conserve 30 percent of U.S. lands and waters by 2030 (it’s currently about 26 percent), a plan proposed by liberal groups in the states as “30 by 30” largely as a measure to “slow climate change” by storing carbon dioxide in plants and soil. He also wants to spend $86 million on the “Civilian Climate Corps,” a reboot of Franklin Roosevelt’s New Deal–era Civilian Conservation Corps. He also wants to spend $300 million “plugging orphan oil and gas wells” and $249 million to boost renewable energy production on public lands.

With pressure from the far Left and willing enablers embedded in the executive branch, the Biden administration will undoubtedly continue down the road toward ever more radical “green” policies—with Arabella’s support. Only one question remains: How much does Biden owe to Arabella’s long war against the Trump Department of the Interior?