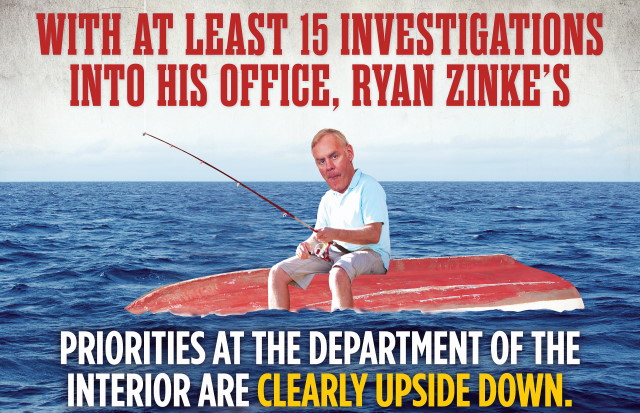 Anatomy of an Arabella Campaign

From 2017 to 2018, WVP ran an all-out attack against Trump administration Secretary of the Interior Ryan Zinke, publishing post after post savaging Zinke and his staff. WVP even published a massive website, DepartmentofInfluence.org, which compiled boatloads of data on nearly every appointee to the Trump administration’s Department of the Interior. The group’s goal was clear: Drive Ryan Zinke out of office and undermine the department’s policies. They finally succeeded in December 2018, and Zinke resigned in early January 2019 amid ethics complaints alleging he had misused public funds during official travel and spent large sums on frivolous things.

In these complaints WVP describes itself as “a not-for-profit public interest organization” and “a tax-exempt organization within the meaning of Section 501(c)(3) of the Internal Revenue Code,” never mentioning its status as a project of the New Venture Fund or its connection to Arabella Advisors. At least one FOIA request was co-filed with American Oversight, another former New Venture Fund pop-up run by Kyle Herrig that also used a UPS Store address in its filings (1030 15th St., NW, Suite B255, Washington, DC 20005) and describes itself as “a nonpartisan, non-profit section 501(c)(3) organization.”

These FOIA complaints exclusively targeted the Department of the Interior. Highlights include:

On October 22, 2018, the Department of the Interior’s Office of Inspector General released its investigative report into Zinke’s alleged ethics abuses and recommended it to the Department of Justice. The office noted that it “initiated this investigation” in December 2017 “based on information we received while investigating [Zinke’s] use of noncommercial aircraft for U.S. Governmental travel.” The source of that information isn’t named, but it isn’t a stretch to believe it originated with Western Values Project.

Eight days later on October 30, WVP released its statement on the probe calling on Zinke to resign. It launched a website (HasRyanZinkeBeenFiredYet.com) demanding the same. On November 9, WVPA released a $30,000 attack ad in seven Montana newspapers accusing Zinke’s “priorities” of being “upside down” and calling for his resignation—presumably paid for by the Sixteen Thirty Fund, which controls WVPA’s finances. One month later Zinke resigned.

Joining WVP and WVPA was the Center for Western Priorities (CWP), a front for the California mega-activist group Resources Legacy Fund—by my count the 16th-largest environmentalist group in the country, spending over $42 million in 2018 alone. CWP painted Zinke as a feckless tool of the oil and gas industry, accusing him of “following President Trump’s marching orders to attack our public lands” and fomenting an “illegal attack on America’s national monuments.” When Zinke resigned in January 2019, CWP labeled him “the most anti-conservation Interior Secretary of all time.”

Almost immediately after Ryan Zinke resigned in December 2018, CWP and WVP turned their guns on undermining Deputy Secretary of the Interior David Bernhardt, who became acting secretary on January 2, 2019, and was officially confirmed in April.

Bernhardt served in the George W. Bush administration’s Department of the Interior, leaving in 2009 as the department’s solicitor. After that he led the Denver firm Brownstein Hyatt Farber Schreck’s natural resources law practice, where his clients included Halliburton Energy Services and the Independent Petroleum Association of America, and he lobbied for Cobalt International Energy and Samson Resources. Before his appointment to the Trump administration, Bernhardt was also registered as a lobbyist for the Westlands Water District in California’s San Joaquin Valley.

On December 17, CWP policy director Jesse Prentice-Dunn published a long hit piece calling Bernhardt a “walking conflict of interest” who would continue “Ryan Zinke’s culture of corruption” and accusing the department of shilling for Big Oil. That same day WVP published the website DavidBernhardt.org, calling Bernhardt “the ultimate DC swamp creature” and an “ex-lobbyist who is too conflicted to be Interior Secretary,” while detailing a laundry list of ethics charges in an attempt to derail his confirmation to the post. Memos about Bernhardt’s background and conflicts of interest and more FOIA requests followed from WVP and CWP, including one from Democracy Forward, a leftist litigation group created by Clinton crony Marc Elias (of Perkins Coie fame) in 2017 to target the Trump administration.

In February, the Campaign for Accountability (CFA), a former “pop-up” of the Arabella-run Hopewell Fund, petitioned the Interior Department inspector general to investigate Bernhardt’s ties to Westlands Water District as a conflict of interest and urged the Senate to reject his confirmation. CFA, which specialized in targeting Trump political appointees, was founded by alumni of another left-wing litigation group, Citizens for Responsibility and Ethics in Washington (CREW), and has been represented by the ex-Arabella pop-up American Oversight in past lawsuits.

The Center for American Progress joined in, labeling Bernhardt “the most conflicted Trump Cabinet nominee.” Greenpeace and the Center for Biological Diversity urged the department’s inspector general to investigate those conflicts of interest, melodramatically declaring him “the most dangerous man in America for endangered species and public lands.” The Sierra Club demanded the Senate reject his confirmation, as did the National Parks Conservation Association and the Natural Resources Defense Council (NRDC).

In March, WVPA launched a six-figure television ad buy targeting Democratic Sen. Martin Heinrich (NM) and moderate Republican Sens. Cory Gardner (CO) and Martha McSally (AZ) to oppose Bernhardt’s confirmation. The assault continued until the Senate confirmed Bernhardt in April 2019. From then on the group’s crusade against Trump’s Department of the Interior focused on thwarting its agenda.

In the next installment, the professional Left’s years-long campaign culminates in the Biden Administration’s rush toward radical “green” policies.