A Vote for Trump Was a Vote to Elevate Kavanaugh 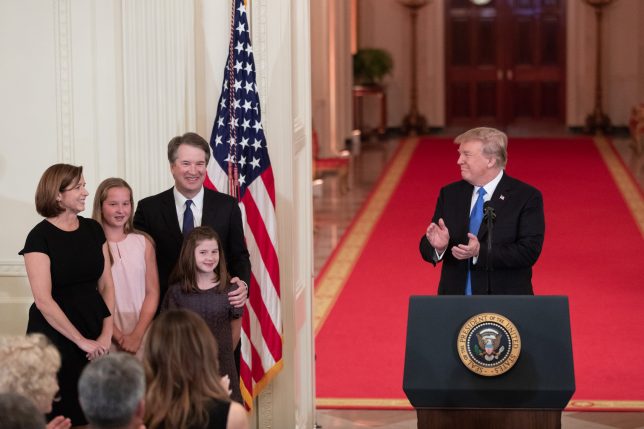 This article originally appeared in RealClearPolitics on August 2, 2018.

Since the 2016 election, the left has been in a state of perpetual hysteria, claiming that the presidency of Donald Trump heralds the end of American democracy—an interesting conclusion to draw from the results of a democratic election. The latest “threat” to the nation? Just the predictable consequence after one side wins an American election: a Republican president nominated a conservative—Brett Kavanaugh—to the Supreme Court.

Before Beltway insiders could speculate about President Trump’s chosen nominee, liberals gathered for a “spontaneous” protest on June 28 in front of the Supreme Court. “If Donald Trump is successful in confirming his next nominee to the Supreme Court,” warned Brian Fallon, executive director of Demand Justice, “we will be living with the stain of Trumpism—not for four years, not for eight years, but for 40 years!”

Demand Justice creates advertising campaigns, like its allied George Soros-funded judiciary advocates People for the American Way and Alliance for Justice—groups infamous for spending millions of dollars in 1987 to block the Senate’s confirmation of the eminently qualified Judge Robert Bork to the Supreme Court. (In a 2012 article, even a columnist for The Atlantic and a fellow at the left-wing Brennan Center lamented the injustices committed in the Bork nomination battle.)

Since then, judicial activists have used similar tactics to (unsuccessfully) block the confirmation of conservative justices—Samuel Alito in 2006 and Neil Gorsuch in 2017. They also launched campaigns to support the confirmation of Obama nominees Sonia Sotomayor in 2009, and Elena Kagan in 2010.

Demand Justice’s “impromptu” protest demonstrated the professional left’s rapid-response system. Staff from my organization, Capital Research Center, crashed and filmed the protest that featured a lineup of Big Left organizations like the Center for American Progress, the agitation group MoveOn.org, environmentalists from the League of Conservation Voters, and abortion activists from NARAL Pro-Choice America and Planned Parenthood—all opposed to Trump’s yet-to-be-announced nominee.

The protest and other relentless efforts to stop Trump’s second nominee are ripped straight from the left’s playbook. And this time around, they may have the votes to do it. As Fallon said, “They say that we can’t change things, that we don’t have the votes, that we can’t stop Mitch McConnell … that’s not true! All we have to do is unite our 49 Democrats [in the Senate] and get one—one!—Republican to agree to vote no.”

But the left’s playbook has limits: The Republican-controlled Senate has no incentive to wait until January 2019 to confirm Kavanaugh. Liberals may call Senate Majority Leader Mitch McConnell a “hypocrite” for not waiting until after the 2018 midterm elections to confirm Kavanaugh, but there’s little they can do to stop him.

It’s unclear why the Senate should wait six months to pursue its clear electoral mandate and consider Trump’s nominee, when the outcome of this election has no bearing on the presidential nomination process.

Even the New York Times agrees. “The people spoke when they re-elected Mr. Obama in 2012,” the Times editorial board wrote in December 2016, “entrusting him to choose new members for the court. And the Senate has had no problem considering, and usually confirming, election-year nominees in the past.”

And here’s what the Times’ editorial board said a day before the November 2016 election: “Make no mistake: That is the [conservative] court Americans would get under a President Trump. Still, Senate Democrats would have an obligation to consider and vote on his nominees, just as Republicans would have that obligation to Mrs. Clinton’s choices.”

Take a look at the oldest sitting Supreme Court justices on Election Day 2016. Anthony Kennedy was 80 years old, Ruth Bader Ginsburg was 83, and Stephen Breyer was 78.

It’s reasonable to assume that voters knew that the winner of the 2016 presidential election was not only guaranteed a Supreme Court pick for Scalia’s seat—but also very likely a second or even third seat.

If Demand Justice and Co. are more interested in politicizing the Supreme Court than promoting constitutionalism, they should say so—and make it a central issue in the 2020 presidential election, just as Republicans made opposition to judicial activism an issue in 2016.

Either way, the illiberal cohort opposing Kavanaugh might reflect on the words of their former boss, President Obama: “Elections have consequences.”