Debunking the Left’s Hysteria at the Supreme Court 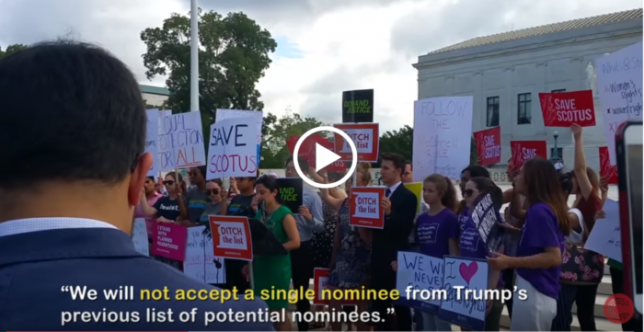 Last week, Capital Research Center reported on the protest held by left-wing groups outside the United States Supreme Court in Washington, D.C., following a string of key victories for First Amendment constitutional rights and the Justice Anthony Kennedy’s coming retirement from the Court on June 31.

CRC noted that the protest was organized by the left-of-center think tank Center for American Progress and the judicial activist groups Alliance for Justice, People for the American Way, and Demand Justice, which have been obstructing the nomination of conservative justices to the Supreme Court since the Ronald Reagan administration. Demand Justice, the newest of these groups, was created in late 2017 after the Trump administration’s nomination of Justice Neil Gorsuch to fill the seat left open by the death of Justice Antonin Scalia in February 2016.

Speakers and sign-wielding protesters at the rally claim that Kennedy’s seat will be “stolen” if Trump nominates a replacement ahead of the 2018 midterm elections, just as they claimed Gorsuch’s seat was “stolen” from Barack Obama’s third Supreme Court nominee, judge Merrick Garland. Protesters jeered Senate Majority Leader Mitch McConnell (R-Kentucky) for refusing to confirm Garland prior to the 2016 presidential election, calling McConnell a “hypocrite”—in the words of Demand Justice executive director Brian Fallon—for not waiting to confirm the administration’s nominee until after the 2018 midterm elections.

But is that really hypocritical?

Justice Anthony Kennedy was 80 on Election Day 2016. Justice Ruth Bader Ginsburg was 83. Justice Stephen Breyer was 78. Isn’t it reasonable to assume that voters understood that the winner of the 2016 presidential election was not only guaranteed a Supreme Court pick for the Scalia seat—but very likely a second or even a third seat from the other octogenarians and near-octogenarian justices?

Only the Senate and the House of Representatives are up for election this year, and neither of those bodies nominates Supreme Court justices. Why should a Republican president wait until January 2019 to fulfill his constitutional duty and nominate a replacement justice? And why should a Republican Senate wait six months to pursue its clear electoral mandate and consider said nominee?

And the left-leaning New York Times editorial board agrees. Here’s what the Times wrote on December 24, 2016:

The people spoke when they re-elected Mr. Obama in 2012, entrusting him to choose new members for the court. And the Senate has had no problem considering, and usually confirming, election-year nominees in the past [emphasis added].

And here’s what the Times editorial board published on November 7, 2016:

Make no mistake: That is the [conservative] court Americans would get under a President Trump. Still, Senate Democrats would have an obligation to consider and vote on his nominees, just as Republicans would have that obligation to Mrs. Clinton’s choices [emphasis added].

But the Court’s landmark decisions on religious liberty, free speech, and voter integrity fly in the face of the doomsday warnings by protest speakers that a more conservative Supreme Court will bring about a Koch Brothers-run dystopia for women and minorities.

Take the extremist rhetoric of abortion advocate Ilyse Hogue, president of NARAL Pro-Choice America. According to Hogue, Trump “is going to put someone on the Court who will be the 5th vote to criminalize abortion, punish women, throw women in jail, for doing nothing more than seeking to control our own lives and our own families.”

“We will not accept a single nominee from Trump’s previous list of potential nominees,” said CAP senior organizing director Anisha Singh, “which does not have a single fair-minded judge on that list.”

Then there’s the extreme vetting process proposed by Brian Fallon: “You [nominees] need to tell us you will uphold the Roe v. Wade decision. That is the [litmus] test.”

In other words, Fallon, Singh, and Co. want nominees to announce their decision now for all future cases related to abortion—before the cases even reach the Court. According to them, the ideal Supreme Court justice is one who runs for the nomination on the Democratic Party platform, instead of fairly weighing the merits of individual cases against the principles and language of the Constitution. Is that the kind of nonpartisan judicial system that will protect individual rights and freedoms?

If liberals like Fallon, Singh, and their protester friends are more interested in politicizing the Supreme Court than promoting constitutionalism, they should say so—and make it a central campaign issue in the 2020 presidential election, like Republicans did in 2016. Otherwise they should celebrate the Court’s strongest support for the First Amendment in decades as a victory for the rule of law.

Either way, they might reflect on former President Obama’s maxim: “Elections have consequences.”