The Battle for the Bench 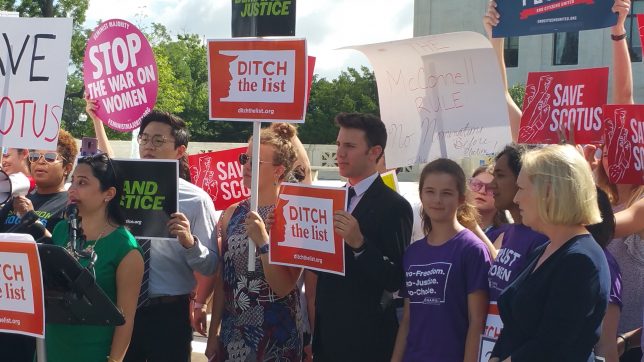 With the announcement of Associate Justice Anthony Kennedy’s upcoming retirement from the Supreme Court of the United States, both sides of the political spectrum are preparing for the biggest fight—thus far—of Donald Trump’s presidency. And that battle is one that has the potential to decide the political majority of the Supreme Court for the foreseeable future.

This fight will be heavily influenced by new and old advocacy groups as both sides vie for a Supreme Court nominee of their choosing.

As should be expected, the Left will push its most well-prepared (and well-funded) judicial advocacy groups to the forefront of this battle. These groups include new organizations such as Demand Justice—created in the wake of Neil Gorsuch’s April 2017 Supreme Court confirmation—as well as veteran groups like People for the American Way (PFAW), Alliance for Justice, and the American Constitution Society (ACS).

This isn’t the first conservative judicial nominee the Left has fought. In 1987, PFAW led the notorious campaign to stop the nomination of the respected judge, Robert Bork, Ronald Reagan’s pick for the Supreme Court seat vacated by Justice Lewis Powell. Decades later, PFAW joined the left-wing Alliance for Justice in running an advertisement campaign in support of President Barack Obama’s nomination of Sonia Sotomayor to the Supreme Court. Both groups also vehemently opposed the confirmation of Associate Justice Neil Gorsuch.

However, there are two things which make this impending confirmation battle unique.

First, any judge confirmed to replace Justice Kennedy—who was often the swing vote on controversial cases during his 30-year tenure—will have the power to shift the political ideology of the Supreme Court. As the power of the Court has grown in shaping many policy questions, those decisions covered controversial issues such as abortion, gay marriage, and more recently, religious freedom and forced labor union dues.

Second, the number of judicial advocacy groups potentially involved in the Left’s campaign against President Trump’s nominee will face a similarly organized ensemble of right-of-center groups such as the Federalist Society and the Judicial Crisis Network. Most of the groups that will likely fight at the front lines against President Trump’s nominee are no stranger to the judicial advocacy scene.

Count on PFAW to take the lead. The group was founded in the 1980s by the liberal television producer Norman Lear to fight against socially conservative principles—most infamously PFAW opposed the well-credentialed Supreme Court nominee Robert Bork, whose defeat in the Senate confirmation process led to the nomination of now-retiring Justice Anthony Kennedy. Since then, PFAW has expanded to advocating for a range of left-wing policies, including expanded abortion access, subsidies for environmentalist groups, and lower restrictions on illegal immigration.

Alliance for Justice (AFJ) is another key player born out of the “sad legacy” of the confirmation process of Robert Bork. AFJ again mobilized against Samuel Alito, the George W. Bush administration’s 2005 Supreme Court nominee. (The Judicial Crisis Network was founded in 2005 to support Alito’s nomination as well as other Bush administration judicial nominees.) In December 2008, CRC identified AFJ as one of the key groups backing then-President Elect Obama’s likely choices for the Supreme Court: Elena Kagan and Sonia Sotomayor.

CRC has also exposed AFJ as one of the leading gun control groups in America, founded by a former American Civil Liberties Union staffer and funded with millions by the left-wing grantmaking Atlantic Philanthropies. The group receives heavy funding by left-wing organizations such as the Ford Foundation, the Susan Thompson Buffett Foundation, and George Soros’ Open Society Foundations (OSF).

The American Constitution Society (ACS) is a newer advocacy group founded in 2001 to advance “loose constructionism” (the Left’s idea that the Constitution is a “living” document and changes over time). ACS was founded to mirror the activities of the right-of-center Federalist Society, and the group also receives funding from OSF and the American Federation of Teachers (AFT).

Demand Justice, the newest group on the scene, emerged in early 2018 and has vowed to fight any nominee from President Trump’s list with its “Ditch the List” campaign. As this campaign shows, the group is following PFAW’s trail by influencing judicial nominations through political advertising. Demand Justice is closing on their $10 million goal for 2018, according to their executive director, Brian Fallon. While the source of this funding is unclear, Fallon’s recent speech at a Democracy Alliance conference suggests that Demand Justice may be heavily supported by this network of left-wing philanthropists.

Both sides recognize the importance of this particular confirmation, meaning this political debate will dominate the news cycle for months to come. Check back here frequently for new CRC research on the advocacy groups working to influence the Supreme Court nominations process.