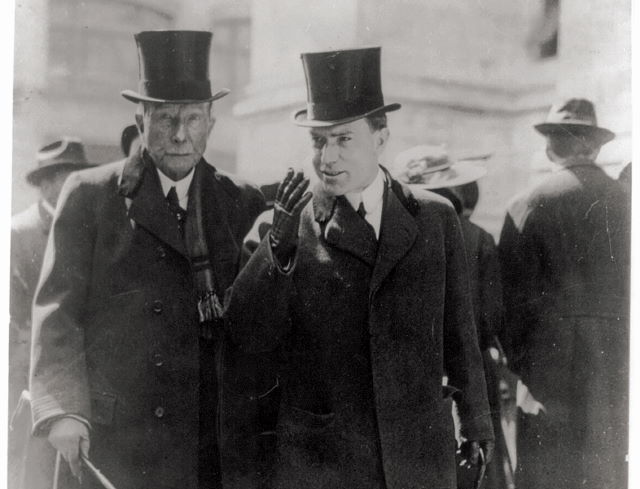 Many decades-old foundations no longer derive meaningful revenue from new contributions. Instead, their endowments grow almost entirely by virtue of their investment returns. The Ford Foundation’s net assets increased by over $2.5 billion from its 2019 to 2020 filings despite not reporting a single new contribution, gift, or grant. License: Public domain.
by Robert Stilson

There is another reason beyond pure transparency why compliance with Form 990-PF investment disclosure requirements is a matter of public importance: a given foundation’s investments can sometimes be rather difficult to square with its grantmaking or otherwise-professed mission.

To be sure, investment portfolios shouldn’t be battlefields for ideological conflict, but many foundations—and particularly the activist groups they fund—are increasingly choosing to make them so. This can result in a marked disconnect between the ways a foundation makes its money and how it spends it.

The issue has arisen most prominently in the context of oil and gas investments coupled with environmental grantmaking—a debate among left-leaning foundations that is well-covered by two Inside Philanthropy articles by Tate Williams: “Major Climate Funders Are Still Invested in Fossil Fuels. Why Is That?” (December 2019) and “As Top Foundations Resist Divesting from Fossil Fuels, What Might Change Their Minds?” (January 2020).

Perhaps the classic example comes via the various Rockefeller philanthropies. Rockefeller family wealth derives largely from the legacy of Standard Oil—a legacy that includes the modern energy behemoths Chevron, Marathon Petroleum, ExxonMobil, and others. Commentators took note when the Rockefeller Foundation, the Rockefeller Brothers Fund, and the Rockefeller Family Fund each announced their intention to divest their endowments from fossil fuel holdings.

The conceptual rationale for philanthropic divestment from fossil fuels was summed up by Rockefeller Brothers Fund president and CEO Stephen Heintz: “it’s morally contradictory to be a leader in philanthropic efforts to combat climate change and to be continuing to invest in the fossil fuels that are causing it.” To be sure, it is hard to dispute that reasoning in light of some of the Rockefeller Brothers Fund’s ultra-environmentalist grantees, such as the Sunrise Movement Education Fund and the Greenpeace Fund. It is considerably easier to dispute such divestment’s actual impact, and indeed what it even means in practice.

Conventional energy sources like oil and gas remain utterly essential to the global economy. Investments into virtually any sector will necessarily benefit in some manner from the burning of these fuels. Is the Rockefeller Brothers Fund truly divested from fossil fuels if it maintains stakes in Halliburton, General Motors, Daimler AG, or any of its hundreds of other investments that would rapidly fail (alongside the global economy) without access to these fuels? As long as the world’s most important energy resources remain the world’s most important energy resources, no serious investment portfolio will be able to avoid profiting from the consumption of those resources.

Moreover, any form of foundation divestment is impossible to verify or evaluate without foundation investment disclosure. In October 2021, the Ford Foundation announced that going forward it “will not invest in any fossil-fuel-related industries.” What exactly is a “fossil-fuel-related” industry is a very open question when 90 percent of global trade is carried by bunker fuel-burning maritime shipping and 79 percent of U.S. primary energy consumption comes from coal, petroleum, and natural gas. Regardless, Ford is not publicly accountable to its self-imposed investment criteria unless it provides detailed investment disclosures on its Form 990-PF.

The issue goes well beyond climate change and divestment of oil and gas holdings. Does the Ford Foundation’s endowment have any direct or indirect exposure to Amazon or Google? ALIGN: Alliance for a Greater New York—an activist group to which Ford granted more than $3.4 million from 2006 through 2015—specifically attacks these “abusive corporations” for making “billions out of the suffering of our communities.”

What about JPMorgan Chase, Wells Fargo, Goldman Sachs, Boeing, Disney, IBM, BlackRock, Uber, or the Blackstone Group? Make the Road New York and the Center for Popular Democracy—which have received more than $34 million combined from Ford since 2009—lambasted these “Corporate Backers of Hate” in 2017 as among those companies “which most egregiously prioritize profits over people.” In 2017, when Ford disclosed its stock holdings, it was invested in several of the “Corporate Backers of Hate.”

Or consider the Robert Wood Johnson Foundation. In 2020, it committed $2 million to a nonprofit project called the Alliance for Housing Justice. The grant was partially for “shifting the narrative from housing as a commodity to a human right” and to “produce an updated and expanded Housing Justice National Platform.” That Housing Justice National Platform, in turn, declares, “Housing and land should be democratically owned and controlled by community members, not by Wall Street and corporations.” It also calls for policies to “disincentivize securitization and profit-driven speculation in our housing.” The Alliance for Housing Justice has specifically targeted the Blackstone Group (a major real estate investment company), decrying its “march to extract as much profit from our communities as possible with no regard for the families who make their homes here.”

That $2 million certainly looks odd when contrasted with the Robert Wood Johnson Foundation’s endowment, which appears to have invested tens of millions of dollars in Blackstone real estate funds. At least $87 million was parked in funds run by Northwood Investors, a multi-billion dollar private real estate investment firm founded by a former top executive at Blackstone. Granting the benefit of the doubt suggests perhaps the foundation has found a way to reconcile these investments with its grantmaking, but it is hard to see how—and hard to imagine the Alliance for Housing Justice approving of its investments.

In the next installment, the anti-capitalist objectives of many foundations belie their investments.