The Private Investments of Private Foundations: Capitalism for Me, But Not for Thee 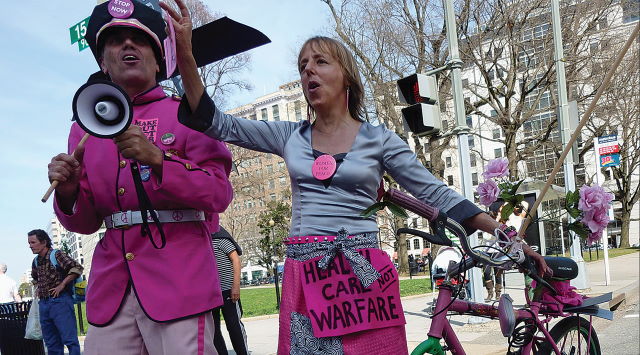 The Benjamin Fund’s president is Medea Benjamin, who is also the co-founder of what has been the foundation’s largest grantee almost every year—over $1.1 million total since 2016—the left-wing activist group Code Pink. Credit: scottmontreal. License: https://bit.ly/3g5wbvD.
by Robert Stilson

Capitalism for Me, But Not for Thee

The specifics of a given foundation’s investments—indeed, whether those investments are properly disclosed and itemized at all—is rather less relevant when that foundation’s grantmaking evidences wholesale antagonism to market capitalism writ large. That said, when such foundations conceal their specific investments, one might reasonably wonder whether the opacity might be intentional.

The Arca Foundation, for example, reported more than half of its 2019 assets as invested either in “common stock” ($17.7 million) or “mutual funds—equity” ($12 million), with no further elaboration. As recently as 2016, however, it disclosed page after page of detailed holdings in a diversified portfolio that embodied Wall Street capitalism. As of December 31, 2016, it held stock in hundreds of different corporations and had millions invested in broad-based exchange-traded funds and mutual funds.

That is quite difficult to square with its grantmaking. According to its website database, since 2011, Arca has made at least $1.2 million in grants that were specifically designated to target “Wall Street” in some manner, plus significant additional sums that were given for clearly related purposes. It gave $150,000 to projects housed at the Alliance for Global Justice—a 501(c)(3) nonprofit that laments “the unjust domination of governments, global financial institutions and multinational corporations” and until recently listed anti-capitalism as among its “core principles.”

Or take the Benjamin Fund. Like Arca it bankrolls some pretty radical groups, and like Arca it once itemized its investments—most recently in 2012. Back then, its portfolio had millions invested in federal and state government obligations and in the stocks or bonds of numerous prominent American corporations. Its 2019 filing, however, simply listed approximately $11.1 million in “Merrill Lynch equities” and $17.2 million in “Merrill Lynch mutual funds.” The Benjamin Fund’s president is Medea Benjamin, who is also the co-founder of what has been the foundation’s largest grantee almost every year—over $1.1 million total since 2016—the left-wing activist group Code Pink.

While best-known for its unflinching hostility to U.S. foreign policy and its affinity for authoritarian regimes in China, Venezuela, Cuba, and Iran, Code Pink would seemingly also take great exception to the Benjamin Fund’s investments. In the Code Pink Peace Collective’s “manifesto,” the self-described “anti-capitalist” group attacks capitalism as a system that “chooses to accelerate the accumulation of wealth and power at the expense of all other living beings.” Chief among the places where this capitalistic wealth and power has accumulated, of course, is in the investment portfolio of Code Pink’s most important foundation funder—the one headed by its co-founder.

One could also point to the Warsh Mott Legacy’s $33 million endowment, which is itemized and primarily invested directly or indirectly (via funds) in the stock of a host of the world’s most well-known corporations. At the same time, since 2018 it has given $180,000 to the anti-corporate activist group Global Exchange (also co-founded by Code Pink’s Medea Benjamin), whose annual list of “Top Ten Corporate Criminals” includes companies in which the Warsh Mott Legacy is directly invested. Much of that $180,000 was specifically earmarked for the Our World Is Not for Sale campaign, whose mission is to fight “the current model of corporate globalization,” while refusing to “accept the current corporate-centered global order and forfeit the welfare of succeeding generations and the future of the planet itself.”

From 2016 to 2018, the Warsh Mott Legacy has also given $110,000 to the National Lawyers Guild Foundation, the 501(c)(3) arm of the avowedly “anti-capitalist” National Lawyers Guild (NLG). The NLG’s far-left policy positions include abolishing “all forms of policing” because police are only accountable “to the white supremacist, capitalist, settler colonial state”; total fossil fuel divestment; support for the anarchist/communist Antifa movement; and a deep hostility toward Israel—what it calls  “a colonizing project rooted in racist ideology.” Indeed, despite investing its endowment almost entirely in the fruits of global capitalism, the Warsh Mott Legacy appears to be deploying its grantmaking in furtherance of the NLG’s 2015 fundraising appeal: “don’t fund capitalism, fund the groups working to dismantle it.”

The Annenberg Foundation not only gave $30,000 to a local NLG chapter in 2018, but $200,000 from 2017 to 2019 to Jacobin—an “explicitly Marxist” publication that has published material saying that the stock market “serves no purpose besides making a small number of undeserving people rich” and deriding “predatory financial institutions like private equity and hedge funds” as “some of the finance industry’s most rapacious and socially useless segments.” One wonders how Jacobin’s authors would characterize Annenberg’s comprehensively itemized $1.4 billion endowment, which is largely parked in corporate stock and in a variety of hedge funds and private equity investments.

In the next installment, consider some possible corrections to politicized philanthropy.