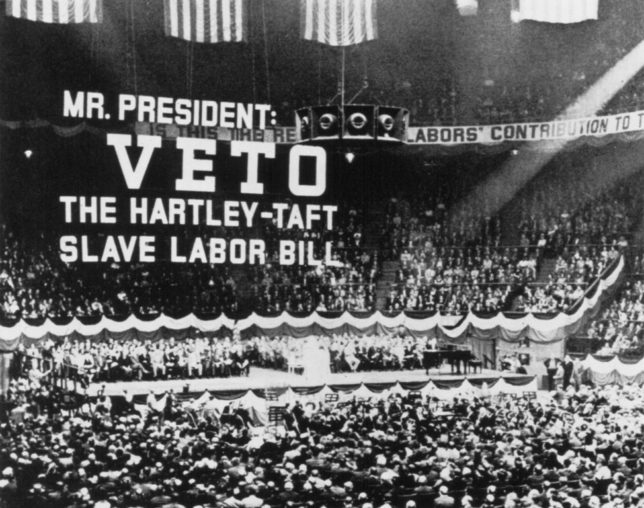 Last week, one of the most impressive and consequential pieces of federal legislation of the 20th century passed its 75th anniversary. The Labor-Management Relations Act of 1947, better known as the Taft-Hartley Act after its Senate and House sponsors, became law when Congress overrode President Harry Truman’s veto on June 23, 1947.

The “Taft” in Taft-Hartley was longtime U.S. Senator Robert Alphonso Taft Sr. (R-OH), son of former President and Chief Justice William Howard Taft. At the time of the law’s passage, the senator from Ohio was chairman of the Senate Republican Policy Committee and seen as the leader of the Republican Party’s conservative faction. He was also a potential challenger to the party’s likely 1948 nominee, moderate New York Governor Thomas E. Dewey.

By 1946, the Republican Party had been completely excluded from federal power since 1933, and the Supreme Court had made its “switch in time to save nine” by upholding New Deal legislation including the original Wagner Act, which laid the groundwork for mandatory bargaining with majority-status labor unions.

But the end of World War II created a political opportunity and public demand to rebalance the power of unions and employers on behalf of the consumer public. Organized labor responded to the end of the war and the end of a wartime labor-relations truce by calling the largest wave of strikes in American history. An estimated 10 percent of the workforce walked out at some point in 1945–1946. Disruptions to the general public from labor activism got so bad that even Harry Truman, the pro-labor incumbent president who would veto the Taft-Hartley Act, threatened to draft railroad workers who had prepared a strike action into the armed forces.

The strike wave exacerbated economic disruptions from the end of the war and helped set the stage for a Republican resurgence in the 1946 midterm elections with a mandate to bring organized labor to heel. Senator Taft led the effort to do so.

By mid-1947, the new Republican congressional majorities, supported by Southern Democrats, had passed over Truman’s veto a major revision to the National Labor Relations Act. The law applied the National Labor Relations Board‘s jurisdiction to unfair labor practices by unions as well as employers, banned secondary strikes and boycotts targeting third-party businesses, and limited forced unionism by explicitly permitting states to enact “right to work” laws prohibiting contract provisions requiring payment of fees to a union as a condition of employment.

The Taft-Hartley Act proved controversial—it and other aggressive conservative legislation enacted by the 80th Congress may have doomed Governor Dewey’s 1948 presidential bid. Far from the “do-nothing Congress” remembered in potted presidential-focused histories, the 80th Congress was extremely consequential. Among the legislative measures it passed was the Twenty-Second Amendment to the Constitution, setting the two-term limit for Presidents.

Organized labor moved more firmly into the Democratic camp, where it remains to this day. Throughout the subsequent 75 years, organized labor has sought to repeal or gut the Taft-Hartley Act whenever the Democrats achieve a federal “trifecta” of the presidency and majorities in both Houses of Congress. Today, that effort is the PRO Act, which among other provisions would permit secondary boycotts and effectively prohibit state right-to-work laws.

But for now, Taft-Hartley still stands. The power of a major left-progressive institution was rolled back, contrary to claims that conservatives “never win anything.” While Senator Taft’s Ohio is not one of them, 27 states now have right-to-work laws. While one must not get complacent, 75 years is a lot of winning.