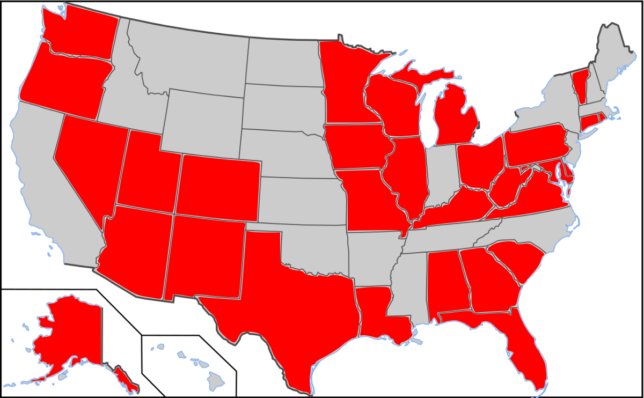 Perhaps the greatest trick the left ever pulled was convincing conservatives there was ever anything nonpartisan about conducting elections.

In the battle over election integrity, one of the least-discussed but increasingly important groups is the little-known Electronic Registration Information Center—better known as “ERIC.” ERIC is a private 501(c)(3) organization, not a government agency, yet it has incredible access to sensitive information on tens of millions of voters across 30 states and the District of Columbia.

ERIC matches death information published by the Social Security Administration to an individual voter’s full name, date of birth, address, phone number, driver’s license number, and partial Social Security Number provided by state departments of motor vehicles (DMVs) to form a picture of where a voter has lived and registered to vote.

It’s unknown exactly how many people are in ERIC’s system, but together those 30 states represent nearly 204 million people—61 percent of the country’s total population.

That information is key to ERIC’s primary purpose: helping member states audit and clean up their voter rolls by identifying when voters move or die. That’s an essential element in improving election integrity.

What ERIC doesn’t advertise is its place as one of the most powerful tools for mass voter registration and turnout in the country. ERIC states are required to target “eligible but unregistered” voters to maintain their taxpayer-funded membership. These campaigns are sometimes paid for by the left-wing Pew Charitable Trusts, a mega-donor to leftist groups that incubated ERIC in 2012.

That isn’t an image the group likes to cultivate, of course. Its most recent IRS disclosure in 2020, for instance, reports that ERIC works with member states to “educate eligible citizens on how to register to vote.” (The IRS allows 501(c)(3) nonprofits to engage in nonpartisan voter education.) But an ERIC-friendly question and answer document published by the Advancement Project, an anti-voter ID advocacy group, puts it very differently:

ERIC states are also required to contact eligible, but unregistered people and “educate them on the most efficient means to register to vote.” Registering the unregistered is mandatory. Indeed, ERIC states are required to initiate contact with at least 95 percent of people identified by ERIC who are eligible or potentially eligible to vote [emphasis added]. Failure to comply results in automatic removal [original emphasis] of the state from ERIC membership.

It’s unclear what “potentially eligible to vote”—as opposed to merely “eligible to vote”—means. The document also asks, “Does the program [ERIC] result in the reduction of unlawful double voting?” The answer given: “ERIC’s purpose is not to reduce the number of alleged double voters.”

Perhaps that’s a poorly written sentence which unintentionally suggests ERIC boosts double voting when it probably meant to state that double voting reduction falls outside of ERIC’s main purpose. Regardless, isn’t catching voters who vote twice just as important as reporting those who’ve moved or died? And shouldn’t Americans be concerned that a private organization is ordering state governments to expand their voter base?

Joining ERIC is cheap on paper—annual dues range from $16,000 to $74,000—but ERIC-mandated registration drives are far more expensive. Virginia’s Department of Elections estimates that ERIC membership and its “associated mailing costs,” a euphemism for mandatory registration drives, average $300,000 per year, just $39,000 of which accounts for dues.

States unable to afford these pricey campaigns were encouraged to turn to Pew Charitable Trusts, which offered grants to help all 50 states “in making the initial outreach to eligible citizens who are not registered to vote”—provided they join ERIC by a deadline set by the foundation. Pew reports offering these grants in 2014, 2015, 2016, and 2017 and continued to subsidize ERIC itself as late as 2019.

In exchange for this money Pew demanded information on: Total voting eligible population; Population transfers with other ERIC states; “Commitment to partnering on research regarding the most effective contact and outreach strategies”; “Percentage of mailing costs that the state is willing to contribute”; and, “Availability of online voter registration currently or in the near future.” Pew was in the driver’s seat for determining which states got the money. Lawmakers ought to ask the obvious question: Is that an appropriate project for a tax-exempt private foundation?

In the next installment, ERIC began as a project of the Pew Charitable Trusts.

This series was originally posted on October 26, 2022.