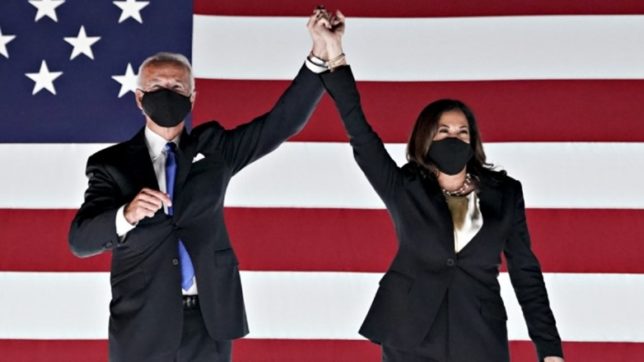 The polls were clear: Former Vice President Joe Biden and Sen. Kamala Harris (D-CA) would be elected president and vice president by a wide margin. The polls were wrong.
by Michael Watson

The polls were clear: There was no doubt that former Vice President Joe Biden and Sen. Kamala Harris (D-CA) would be elected president and vice president of the United States. The FiveThirtyEight A-rated pollster SurveyUSA found a Biden national lead of 8 points over President Trump; the B-plus-rated Quinnipiac found a Biden lead of 11, comparable in scale to Ronald Reagan’s 1980 triumph over incumbent President Jimmy Carter. The Cook Political Report cautioned that polling error “could help Biden”—bringing into play a 1964-style total Republican wipeout.

But on November 4, the country did not wake up to a total Republican wipeout—it woke up to uncertainty, as late-arriving mail-in ballots were counted in the Upper Midwest and Georgia. While Biden and Harris eventually prevailed, they did so by a relatively narrow margin, with a presumptive Electoral College margin exactly mirroring Trump’s presumptive 2016 margin of 306-232. (The official margin in 2016 was slightly different due to “faithless electors.”) If just over 43,000 Biden voters had switched to Trump in the states of Arizona, Wisconsin, and Georgia, the Electoral College would have been evenly divided, and the incoming House of Representatives would have been poised to re-elect Trump by a vote of state delegations.

And instead of the triumph of an Emerging Democratic Majority powered by “rising” demographics (especially Hispanic Americans), Biden’s win hinged on mundane vote-switching and ticket-splitting by moderate, suburban, and largely white voters who had voted for Trump or a third-party candidate in 2016 but chose not to re-elect him, even as many of them chose Republican candidates for Congress or state offices.

And the county-by-county results showed that not only had the emerging Democratic majority of “rising American electorate” demographics not delivered the White House to Biden, but President Trump had made notable inroads with that Democratic bloc: He carried Florida—against the prediction of the highly-rated pollsters NYT/Siena, Monmouth, and Marist—largely by swinging majority-Hispanic Miami-Dade, the state’s most populous county, 22 points to the right. And while some observers wished to write off the Florida gains as reliant upon the idiosyncratic national-origin makeup of the state’s Hispanic communities, the pattern repeated (albeit to a less pronounced degree) across the country, with 78 of the 100 majority-Hispanic counties in the country swinging to the right even as the national electorate slipped slightly to the left. As of writing, Biden won slightly more than 4 percent more ballots nationwide, compared to Hillary Clinton’s 2016 margin of about 2 percent.

For liberal politicians, the responses to this blue trickle and contrarrevolución roja ranged from outrage to exasperation. Former President Barack Obama, on a radio show while touring to sell his third memoir, blamed the Hispanic swings on “evangelical Hispanics” who put “the fact that he [Trump] supports their views on gay marriage or abortion” ahead of “the fact that Trump says racist things about Mexicans or puts undocumented workers in cages.” Rep. Ruben Gallego (D-AZ) targeted the use of the term “Latinx” by left-wing activists. Other Democrats warned that Republican messaging highlighting the “defund the police” rhetoric of the radical wing of Black Lives Matter had resonated with their constituents.

The knives were already out. Republican incumbents, especially in suburban districts, were announcing mass retirements. Over 20 had quit and not sought other offices. The Cook Political Report projected up to 20 net Republican seat losses, with no hope of narrowing Speaker Pelosi’s Democratic majority. The U.S. Chamber of Commerce, the largest business lobby and historically a Republican stalwart, all but conceded defeat in the House, endorsing 23 freshman Democrats including some like Abby Finkenauer (D-IA), Xochitl Torres Small (D-NM), and Harley Rouda (D-CA) who had voted for the odious union-favor Protecting the Right to Organize Act (H.R. 2474).

But Finkenauer, Torres Small, and Rouda will not be in the 117th Congress. All three lost to Republican challengers, as did at least nine of their colleagues. Republicans held almost all the seats made vacant by the slate of retirements, losing only two North Carolina districts redrawn as safely Democratic by North Carolina’s Democratic courts and an open seat in the Atlanta suburbs.

There was something curious about how the party of “old white dudes” cut Pelosi’s majority: All the Republicans who defeated Democratic incumbents were either women, minorities (if the Portuguese-descended David Valadao counts as Latino), or both. As of writing, at least 30 of the at least 45 incoming Republican Representatives are women, ethnic minorities, or military veterans.

In the next installment of “The Left’s Hollow Victory,” watch Democratic donors spend hundreds of millions of dollars on Senate races.