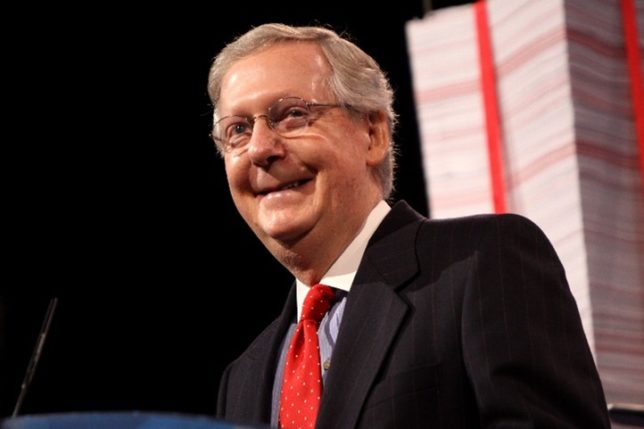 On September 18, 2020, Supreme Court Associate Justice Ruth Bader Ginsburg, the Court’s arch-liberal and an ACLU alumna, died of cancer. Senate Republicans and President Trump announced shortly thereafter that the president would nominate a replacement, and the Senate would consider the nominee. Democratic donors responded with what the New York Times called “a spontaneous outpouring of donations the likes of which they had never seen.” Democrats were already outspending Senate Republicans in races across the nation, but Ginsburg’s death and the subsequent nomination of Judge Amy Coney Barrett made the GOP’s money disadvantage all but terminal.

Liberal podcasting network Crooked Media, run by Obama administration and Clinton 2016 campaign veterans, raised $18.5 million for Senate Democrats in its Get Mitch or Die Trying campaign in the three days following Ginsburg’s passing. The Bulwark commentator and erstwhile conservative Bill Kristol predicted the Supreme Court fight “could help Democratic challengers in many Senate races. And . . . I’m not so sure Mitch McConnell will prevail.”

But McConnell did prevail. The week before Election Day, the Senate confirmed Justice Barrett. Democrats and liberal judicial activists like Demand Justice vowed revenge, expecting the tsunami of money to wash away even red-state Republican Senators like Lindsey Graham (R-SC), the chair of the Judiciary Committee that had advanced Barrett’s nomination. This would enable a new, large Democratic Senate majority to carry out a final assault on the filibuster, pack the Supreme Court, and enable the Left to run roughshod over constitutional norms. Jamie Harrison, Graham’s Democratic rival, raised $107 million through mid-October, far outstripping the three-term incumbent. Graham wasn’t alone: Democratic candidates outraised Republicans in each of the top 10 most expensive Senate races nationwide. All told, through the end of September, the liberal fundraising vehicle ActBlue had processed $1.5 billion for Senate Democrats, outstripping its Republican counterpart WinRed by nearly $1 billion.

But then votes were cast and counted. Graham won comfortably, outpolling Harrison, the former chair of the state Democratic Party, by 10 points. Sen. McConnell beat his challenger Amy McGrath, who had raised $88 million, by 19 points. Sen. Joni Ernst (R-IA) won re-election by 7 points, and Sen. Steve Daines (R-MT) by 10 points despite their Democratic opponents outraised them. Top Democratic recruit Cal Cunningham flopped in his challenge to Sen. Thom Tillis (R-NC) after a sex scandal.

But perhaps most gallingly of all to the dreams of a Left ascendant and able to “abandon defensive crouch liberal constitutionalism,” moderate Sen. Collins defied Maine’s controversial liberal-favoring “ranked-choice voting” system and the polls to win an outright majority over her opponent, State House Speaker Sarah Gideon (D). Yet no public poll used by RealClearPolitics showed her leading. Reports following the astounding result showed that Democrats’ money and advertising tsunami may have in fact backfired, with national groups’ all-but-bullying of Maine’s long-time incumbent turning off independent voters.

After the votes were counted, Democrats and Demand Justice were no longer strategizing to pass a Judiciary Reform Act of 2021 to add four seats to the Supreme Court. They were de-camping for two Georgia run-off elections and staring at a Senate agenda dictated for two years by either West Virginia’s center-left Democratic Sen. Joe Manchin or their nemesis, Cocaine Mitch.

Smart Democrats knew an even bigger prize than a federal “trifecta” plus packing the Supreme Court was on offer in 2020. Every decade, the U.S. Census determines the apportionment of seats in the U.S. House of Representatives, and states are obligated to redraw congressional districts to ensure approximately equal representation among districts within a state. In most states, these districts are drawn by the state legislature, sometimes without being subject to a gubernatorial veto.

But Democrats would not let themselves be caught napping again. In January 2017, before the Obama administration had even finished, former Attorney General Eric Holder announced the formation of the National Democratic Redistricting Committee (NDRC) to make sure Democrats would retake control of the process. NDRC spun up two affiliated groups, National Redistricting Foundation and National Redistricting Action Fund, to carry out litigation, while NDRC would play in state legislative races to ensure Democratic control.

The 2017, 2018, and 2019 elections were marked by a state-level “blue wave,” with Democrats gaining gubernatorial-state legislative “trifectas” in Virginia, Colorado, Illinois, Maine, Nevada, New Jersey, New Mexico, New York, and Washington while breaking Republican trifectas in Kentucky, Kansas, Michigan, New Hampshire, and Wisconsin. Holder targeted 12 states for the 2020 elections to build on his 2017–2019 victories, which had already seen judges in Pennsylvania and North Carolina redraw congressional districts to favor Democrats.

But the electorate caged Holder’s redistricting tiger. Contrary to the predictions at the “Crystal Ball” of liberal University of Virginia psephologist Larry Sabato, Democrats gained control of zero state legislative chambers, falling short most notably in the Minnesota Senate, Michigan House, and both houses of the Arizona Legislature. Democrats had dreamed of flipping the Texas House, but Republicans maintained their majority with no net change in partisan balance.

When the dust settled, Republicans had gained two trifectas. In New Hampshire, Gov. Chris Sununu cruised to his second re-election—New Hampshire elects its governor to a two-year term. But unlike in 2018 when Democrats retook control of the state legislature and the Executive Council (which can veto certain gubernatorial actions), Sununu’s Republicans stormed to majorities in all three state bodies. Montana meanwhile broke a 16-year streak of Democratic governors, electing then-U.S. Rep. Greg Gianforte (R) to the governorship on his second attempt, giving Republicans their first trifecta in the state since 2004.

In the next installment of “The Left’s Hollow Victory,” learn of voters’ surprising decisions in California.