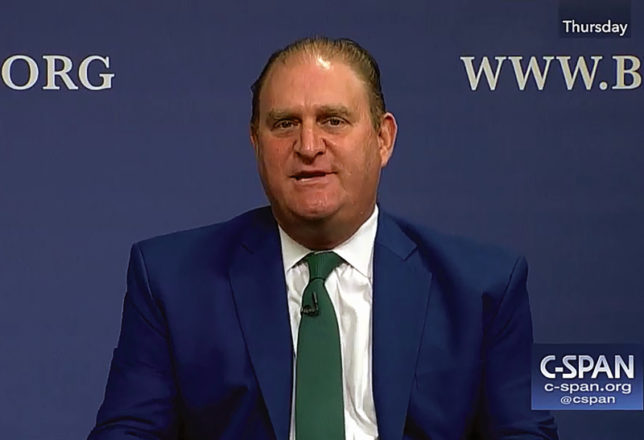 The U.S. Supreme Court threw out the maps drawn by North Carolina’s legislature after the 2010 Census as overly partisan (North Carolina v. Covington), but instead of asking the state legislature to redraw them it appointed a special master: Nathaniel Persily, a Stanford University law professor. Credit: C-SPAN. License: https://cs.pn/32rXI2W.
by Hayden Ludwig

The third group, the National Redistricting Foundation (NRF), has already had perhaps the most potent impact on the 2020 election. The 501(c)(3) group describes its mission as “initiating litigation that will have a nationwide impact in creating more just and representative electoral districts,” which in effect means helping Democrats. To date, it has filed or supported several important lawsuits in states that are heavily contested at the state or congressional level. In Wisconsin, it demanded that then-Gov. Scott Walker (R) hold special elections in two state legislative districts. In Georgia, it accused Republicans of drawing racist congressional maps. And in North Carolina, it accused the state of drawing unfair congressional maps.

First, a little background: in 2017, the U.S. Supreme Court threw out the maps drawn by North Carolina’s legislature after the 2010 Census as overly partisan (North Carolina v. Covington), but instead of asking the state legislature to redraw them it appointed a special master, a Stanford University law professor. Critically, that professor also redrew maps in Pennsylvania after a state court found them unconstitutional.

When the 2018 midterms came around, voters in both states went to the polls in districts that had been completely redrawn—and the Democrats won big.

Liberals declared that justice had been served. Conservatives saw it differently, with many claiming that North Carolina and Pennsylvania had simply been gerrymandered in favor of Democrats. To be fair, there were many reasons why the Republicans lost and the Democrats won in those states, but the new maps arguably gave liberals an edge they didn’t possess under the pre-2017 maps.

Yet one victory wasn’t enough for the Left. On November 13, 2018—exactly one week after the midterm elections—Holder’s NRF backed a lawsuit by a branch of Common Cause (a liberal redistricting group) claiming the state legislative maps were still gerrymandered. This time, however, they brought the case (Common Cause v. Lewis) to a state elections panel, which in a 2-1, 357-page ruling threw the maps out yet again on September 3, 2019. Republicans, faced with appealing the decision before the 6-1 Democratic majority in the state Supreme Court, admitted defeat.

If liberals were giddy before, they were now ecstatic. “Our heads are spinning here in North Carolina,” the head of Common Cause North Carolina told the New York Times.

The Wall Street Journal editorial board called the move a “redistricting coup” meant to “tee up” Democrats for the 2020 election. “Liberals assail partisan gerrymanders as undemocratic except when they do the rigging.”

Incredibly, that still wasn’t the end of the Left’s redistricting lawsuits in the Tar Heel State. Just weeks after the state panel ruling in September, the NRF filed another lawsuit, this time targeting North Carolina’s congressional map, which it called perhaps “the most extreme and brazen partisan gerrymander in American history.” Even the liberal New York Times recognized that the lawsuits’ shared goal was “challeng[ing] Republican control of the next round of redistricting in 2021.”

On October 30, 2019, three judges on North Carolina’s Superior Court ruled that the congressional maps “do not permit voters to freely choose their representative, but rather representatives are choosing voters based upon sophisticated partisan sorting.” The court threw out the congressional maps and ordered the legislature to draw remedial maps for the 2020 election under supervision of a court-appointed referee. Those remedial maps, which were eventually upheld by the court in December, were widely seen as helpful to Democrats, who are expected to pick up two seats in the 2020 election—reducing the state GOP’s advantage in Congress from 10-3 to 8-5.

Rep. G.K. Butterfield, a Democrat representing the state’s northeastern counties, still wasn’t impressed: “To have a fair map we need a 6-7 map or a 7-6 map or a 6-6-1 map,” he told the press. “Those would be fair maps.”

Getting Out the (Democratic) Vote

Of course, this matters little if Democrats cannot win elections. Enter the Left’s vast array of ostensibly nonpartisan GOTV nonprofits, which with few exceptions operate as tax-exempt 501(c)(3) public charities. The IRS considers voter registration a charitable act (like census registration). Moreover, these groups are required to be nonpartisan, but not non-ideological.

America Votes is at the nexus of left-wing GOTV activism. The self-described “coordination hub of the Progressive community” was devised by political operatives in the wake of the Democrats’ defeat in the 2004 midterms as a way to build permanent left-wing infrastructure in all future elections.

To achieve this, it has amassed an incredible $95 million and the support of nearly every notable group on the Left to build an impressive network of aligned groups across two dozen states. North Carolina is the newest “core state” in America Votes’ roster, meaning local operations are directly controlled by its office in Washington, DC. (Operations in less important “affiliate states” are generally outsourced to small, standalone affiliates.)

Its leadership exhibits a similar partisan bent. The group’s founding president was Anne Bartley, a former aide to First Lady Hillary Clinton and a wealthy Democratic donor involved in founding numerous prominent leftist organizations, including the Democracy Alliance. Its current director, Greg Speed, is a former staffer at the Democratic Congressional Campaign Committee, a group with the sole purpose of electing Democrats to the House of Representatives.

America Votes is an original member of the Democracy Alliance—a shadowy collective of leftist mega-funders and influencers who meet annually to coordinate spending on political goals—which praises America Votes as “the common link between many of the largest and most influential issue and membership organizations in the country.”

There’s little doubt that America Votes is a thinly veiled tax-exempt political campaign for electing Democrats, and the Right has nothing comparable. A 2018 job posting shows the group sought a data expert whose job description is strikingly similar to that of a political campaign consultant: “Work with partner organizations using the voter file and other technologies to support and enhance voter contact programs.”

CRC obtained an agenda for America Votes’ state summit held in February 2019, where the workshops and strategy sessions sound far more like those run by partisan campaigns than tax-exempt nonprofits. The highlights include:

2020 is the next in the long series of “most important elections in our lifetimes.” Indeed, the stakes could not be higher – from winning the White House and ending the Trump Era in American politics to the fight for full control of Congress to the final state elections before the next redistricting. Everything is on the line, and enormous change is possible if progressives are successful.

While focus has clearly shifted toward 2020, how should the remarkable 2018 cycle inform progressives’ strategies moving forward? What do last year’s outcomes say about the real state of power in this country, and what strategies and messages will not just help win the next election but also move society toward broader equity and progress?

. . . America Votes partners did much to shape the midterm narrative and electorate on the ground in their states through effective advocacy and election programs and strategies. The “Digging Deeper” breakout sessions will focus on what worked, what’s replicable and/or what really needs to happen on the ground to continue building toward further victory and progress in 2020 and beyond.

. . . progressives fight to ensure a complete count and fair 2020 Census, plus undo conservative gerrymanders in post-2020 redistricting, all while enacting powerful democracy and election reforms such as Automatic Voter Registration at the state level.

With 2020 fast approaching, the Trump Administration’s incompetence and malevolence threatens the integrity of the [census] count.

In the next installment of “Plans to Flip North Carolina,” see the millions of dollars flowing to leftist groups in North Carolina.