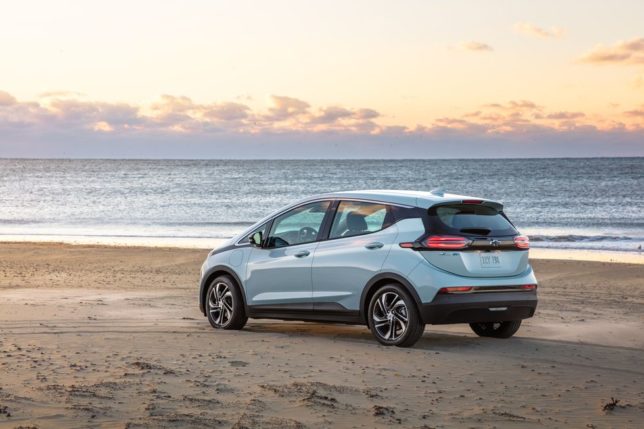 The Chevrolet Bold (pictured) and Ford Mustang Mach-E are the two models that would qualify for the $4,500 tax credit in the proposed budget reconciliation legislation.
by Michael Watson

If the “labor conservatives” were Captain Ahab from the classic novel Moby-Dick, their White Whale would be a divorce between institutional organized labor and the environmentalist movement, which they reasonably see as holding back manufacturing and other industrial employment. But a provision of the Congressional Democrats’ proposed “budget reconciliation” legislation demonstrates how that alliance works in practice and how hard it would be to break it.

Tax Breaks for the Union Label

Among the various benefits and handouts that Congressional Democrats propose to give to the labor unions that fund their campaigns and to an even greater degree fund the organized professional Left is a $4,500 tax credit for buying electric cars. So far, so Big Green, but what makes it a labor union handout is this provision on page 1,878 of the 2,465-page bill:

The term “domestic assembly qualifications” means, with respect to any new qualified plug-in electric vehicle, that the final assembly of such vehicle occurs at a plant, factory, or other place which is operating under a collective bargaining agreement negotiated by an employee organization [citations and cross-references omitted].

Translated from legislative-ese, the $4,500 tax credit for buying Big Green’s car applies only if that car is made by Big Labor.

No imports and no non-union American cars qualify. In practice, that means that 10 of the 12 models Car and Driver identified as the best-selling electric cars of the first quarter of 2021 would not qualify.  For the curious, Car and Driver’s top-12 electrics sold a total of 204,141 vehicles in the first quarter of 2021. In the same period Ford alone sold 203,797 F-Series pickup trucks.

Beyond this straightforward payoff from Big Green to Big Labor at taxpayer expense, there are deep connections between organized labor and the Green Left that caution against expecting a “blue-green divorce” anytime soon. Most notably, there is the BlueGreen Alliance, a formal partnership organization involving major national labor unions (including construction and manual-labor trade unions like the United Association and SMART) and national environmentalist groups like the Natural Resources Defense Council and Sierra Club.

The BlueGreen Alliance grew from the Apollo Alliance, an ACORN-tied group whose mission former Obama administration official and CNN commentator Van Jones characterized as “sort of a grand unified field theory for progressive left causes.” That grand unified field theory can best be called “social justice unionism,” the alignment of labor unionism closely with the “non-economic” Left to promote a seamless progressive movement.

That brings us full circle to the vain hopes for a divorce between organized labor and the broader Left. Organized labor is ideologically, institutionally, and individually intertwined with all factions of the left-progressive movement. It is hard even to identify strains in the longstanding marriage. Note that this applies at the institutional and professional level, not the membership level. Roughly 40 percent of union households report in exit polls that they vote Republican, a far larger share of vote than the share of financial support institutional organized labor gives Republicans and right-of-center advocacy.

But for now, Big Labor is firmly ensconced in the Democratic-progressive tent. And that means that it will settle for having its back scratched by its allies, like when Greens apply a tax credit to only Big Labor cars.