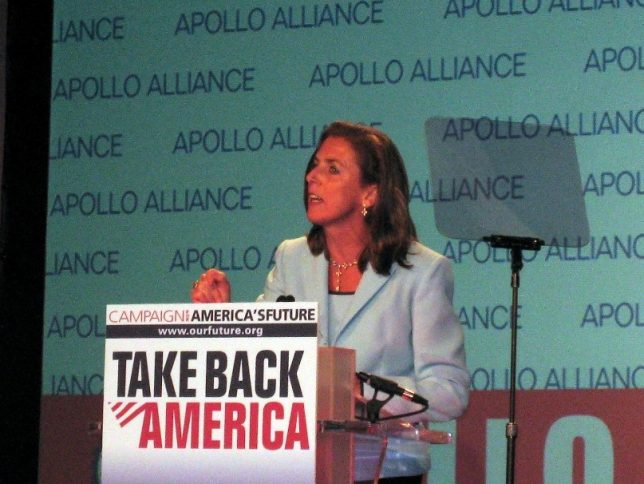 One of the Tides Center’s (a subsidiary of the Tides Foundation) lesser-known projects, the Apollo Alliance, started in 2004 in Washington, D.C., to “catalyze a clean energy revolution in America”—this, according to text taken from Apollo’s now-defunct website.

From the start, Apollo set about gathering labor unions, environmentalists, and social justice activists under one banner. It quickly earned the requisite endorsements from the AFL-CIO, Working Families Party, AFSCME, Service Employees International Union, International Brotherhood of Teamsters, Greenpeace USA, the Sierra Club, the League of Conservation Voters, the Union of Concerned Scientists, ACORN, and the NAACP. Van Jones, the Obama era “Green Jobs Czar,” described the group’s mission as “sort of a grand unified field theory for progressive left causes.” Then-Congressman Jay Inslee (now the governor of Washington state), a member of its national advisory board, called Apollo “an opportunity for a bold new energy policy that can free us from our over-dependence on Middle East oil, expand the economy, and address environmental challenges.”

The Tides Foundation was a major funder of the Apollo Alliance. Google, well-known for supporting Democratic politicians, was also a key funder, along with the massive utility company Pacific Gas & Electric (PG&E).

Apollo managed to impact U.S. politics substantially over the course of its brief reign. In late 2008, during the height of the financial crisis, the organization crafted the Apollo Economic Recovery Act (AERA)—a measure containing environmentalist policy prescriptions such as $110 billion for “green jobs” programs. AERA later found a place in the American Recovery and Reinvestment Act of 2009, known more popularly as the stimulus bill, passed by the Democrat-controlled Congress. Apollo became so influential in passing the legislation and influencing its “green” elements, the group got a shout-out from Senate Majority Leader Harry Reid: “The Apollo Alliance has been an important factor in helping us develop and execute a strategy that makes great progress on these goals and in motivating the public to support them,” Reid said.

Apollo and its program recommendations maintained deep connections in the Obama administration. Enter Brian Deese, a former senior economic policy analyst for John Podesta’s Center for American Progress and a 2008 Hillary Clinton campaign staffer. Deese later served as a senior advisor to the President in the Obama administration, first as deputy director of the National Economic Council and later as deputy director of the Office of Management and Budget (2013-2015). In 2009, he masterminded the Car Allowance Rebate System, or “cash for clunkers,” a $3 billion wealth redistribution program favored by Apollo that was aimed at promoting fuel-efficient cars for low-income earners. Besides promoting the Left’s anti-oil agenda, the program helped stimulate the flagging U.S. auto industry alongside the federal bailouts that followed. It was so effective in the eyes of many on the Left that in 2009 the New York Times described the then-31 year old Deese as “one of the most influential voices” in the Obama administration’s bailouts of General Motors and Chrysler.

In August 2009, Fox News host Glenn Beck identified the Apollo Alliance as a professional attempt at further solidifying labor unions, social justice activists, and environmentalist groups under one, well-coordinated aegis. “This is the head… this is at least a main player of what’s going on in America,” Beck said, identifying Apollo as a key “porthole” into the political schemes on the Left. And with Van Jones so close to the President, Apollo was on-track to accrue billions of dollars in federal funding.

But Beck’s revelations about Jones’ background as a devotee of “communism” and “anarchism” (in 1992 Jones founded a radical socialist organization called Standing Together to Organize a Revolutionary Movement, or STORM) who blamed President Bush for the September 11, 2001, terrorist attacks proved fatal to the White House career of the rising “green jobs czar.” As Americans for Prosperity Foundation’s Phil Kerpen noted, Jones left the Obama administration for a job at the Center for American Progress.

Drummond Pike soon stepped in. In July 2010, a crazed shooter and convicted felon named Byron Williams was arrested by police for driving erratically in Oakland, California. Williams later claimed he wanted to kill “people of importance at the Tides Foundation and the ACLU,” and the incident was blamed by many on Beck’s reporting. In an October 2010 open letter, Pike blamed Fox News for promoting “hate speech,” and asked major advertisers to yank their ads from the network. He demanded that Fox News fire Glenn Beck for inciting violence against “the charitable, nonpartisan programs we run” at Tides. His efforts fell short. Beck continued his reporting on Apollo.

At some point during the latter half of the Obama administration, the Apollo Alliance quietly left the political stage. The group was rolled over into the BlueGreen Alliance, a similarly structured organization still in operation.

In the final installation of Tides’ Legal Laundering, we meet the new crop of ‘Tidesters’ attempting to influence the 2018 midterm elections.