In March 2020, I broke the story that in 2018 the Buffett Foundation was the single biggest donor to the Hopewell Fund—the abortion arm of the $635 million “dark money” empire run by Arabella Advisors. CRC exposed Arabella Advisors, a for-profit consulting firm in Washington, DC, and the Arabella network—which runs a multitude of fake “pop-up” groups and websites made to look like real nonprofits—in the 2019 report Big Money in Dark Shadows. It’s a small story that shines a lot of light on the Buffett Foundation’s influence on the national abortion-on-demand debate.

The Hopewell Fund, which is controlled by Arabella Advisors, was actually started in 2015 with $8.4 million in seed money from the Buffett Foundation. Under IRS rules, foundations are required to publicly disclose to whom they make grants, though 501(c)(3) nonprofits such as Hopewell aren’t required to name their donors (only the amounts of their donations) in their annual Form 990 filings. This often obscures the money trail, making it nearly impossible for watchdog groups such as CRC to expose the funders behind an activist group.

In its 2018 IRS Form 990, the Hopewell Fund reported just two anonymous donors: One gave the group $2.3 million, and the other nearly $29 million.

The Buffett Foundation donated $27 million in grants to Hopewell in 2018, making the foundation the largest donor to Hopewell in 2018. (The remaining $2 million may have been gifted after the foundation filed its Form 990 with the IRS.) The description for each Buffett Foundation grant is the same: “project support,” likely referring to one of Hopewell’s nine known “pop-up” groups. But which one?

Obscuring which donor paid for which project is one strength of the Arabella “dark money” system, which is why its biggest clients are the biggest left-wing foundations in America. But considering the Buffett Foundation’s deep-pocketed support for abortion on demand, one Hopewell pro-abortion group stands out as the likely recipient: Resources for Abortion Delivery (RAD).

Almost nothing concrete is known about RAD. Its website is a one-page, 73-word, vague description of its mission: “improv[ing] access to quality abortion care in the United States . . . by supporting the abortion care delivery system” against outside challenges and restrictive laws.

A $200,000 grant in 2017 from the Tara Health Foundation, an abortion funder, indicates that RAD advocates against “burdensome laws” and the “stigmatizing” of abortion. A job listing from earlier in 2020 notes that the group has eight employees and “provides legal and regulatory compliance advice to abortion providers” as well as loans to “independent abortion providers.”

RAD was created in 2016 and is run by Meagan Cavanaugh, the former national director of affiliate services for Planned Parenthood. Before that, she was a research manager for the Guttmacher Institute, Planned Parenthood’s think tank for pro-abortion research. The Buffett Foundation has given over $112 million to Guttmacher in the last two decades.

RAD co-manages the Abortion Law Project, a public database of abortion laws and regulations across the country, along with the ACLU, National Abortion Federation, Planned Parenthood, and other aligned organizations. While much of the group’s activities remain shrouded, what is known about Resources for Abortion Delivery further reveals the Left’s massive network of overlapping abortion groups—and the billions of dollars they receive from secretive mega-donors such as Warren Buffett. 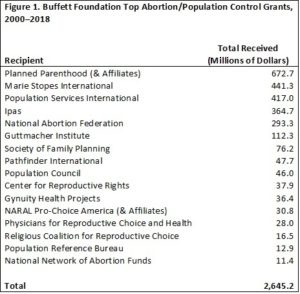 A Victory for Life

Although the pro-life movement has made impressive gains in recent years—including a rule barring federal funding of groups that perform abortion referrals, such as Planned Parenthood—there’s no doubt that the Susan Thompson Buffett Foundation has the wealth to keep the pro-abortion camp afloat for years. But here’s one positive anecdote for those fighting for the rights of the unborn.

In the 1980s and 1990s, a significant portion of the Buffett Foundation’s funding came from Berkshire Hathaway itself, which for decades made donations to nonprofits at the direction of the company’s shareholders. Between 2002 and 2003, for example, that totaled $18.5 million. And since Warren Buffett himself has always maintained a plurality control of the company, that’s translated to tens of millions of dollars given to pro-choice and population control groups over the years.

But the scheme ended in 2003 in a curious set of circumstances.

In 2002, Steve Mosher, president of the pro-life Population Research Institute, gave a lecture before gathered Berkshire Hathaway shareholders that culminated in a resolution that would have barred the company from donating to abortion and population control groups. “What sense does it make for you to be eliminating future Berkshire Hathaway customers? The success of Berkshire Hathaway depends on having customers to buy its products.” (The conglomerate owns dozens of name brand companies, including GEICO, See’s Candies, Dairy Queen, and Fruit of the Loom.)

Shareholders voted the resolution down. But the next year, Berkshire Hathaway acquired Pampered Chef (a kitchen tool manufacturer) and its network of 67,000 independent sellers, many of them stay-at-home mothers. One of these “kitchen consultants,” Cindy Coughlon, objected to association with Berkshire Hathaway since part of the profits from her sales for Pampered Chef would invariably benefit the conglomerate’s pro-abortion donations.

Coughlon drafted her own resolution barring Berkshire Hathaway donations to abortion and population control groups, and incredibly, it passed in July 2003. (Aghast, Buffett ceased making corporate contributions entirely.) One small victory for millions of people, born and yet to be born.