Terror of the Unborn: Billions for Millions of Abortions 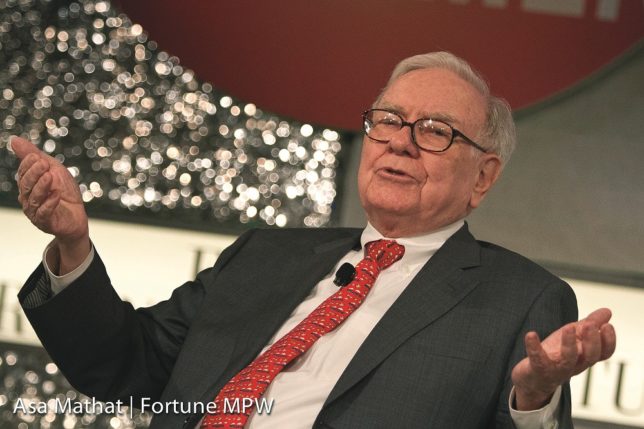 He’s not exactly the face of abortion activism. When most Americans think of Warren Buffett—the famed Wizard of Omaha and third-richest man on Earth—other things come to mind: the brilliant investor and founder of mega-conglomerate Berkshire Hathaway, outspoken Democratic Party donor, and accomplished philanthropist.

It’s his charity that’s earned this notoriously frugal arch-capitalist (he still lives in the house he bought in 1958 for $31,500) the most acclaim from the otherwise free-market-skeptic media. Liberal pundits and philanthropoids gushed over Buffett’s 2006 “Giving Pledge,” an oath to gradually give away 99 percent of his wealth. (Other elites such as Bill and Melinda Gates, Paul Allen, and Michael Bloomberg have also taken the pledge.) In 2011, President Barack Obama even hosted Buffett in the White House for an “update” on the Giving Pledge’s progress. CNBC has celebrated Buffett as America’s “most charitable billionaire.”

But there’s a darker side to Buffett’s multi-billion-dollar philanthropy. For decades, he’s donated vast sums to a foundation created to address what one biographer called Buffett’s “Malthusian dread” of overpopulation—the thoroughly debunked idea that humans will reproduce themselves into mass starvation and death, named for the 19th century British scholar Thomas Malthus. Given his enormous wealth and single-minded commitment, Warren Buffett may be the biggest funder of abortion in history.

Billions for Millions of Abortions

According to my analysis, over the past two decades the Susan Thompson Buffett Foundation has poured an incredible $4 billion into pro-abortion, pro-population control groups, easily making Warren Buffett the single most important supporter of abortion-on-demand in our day. In that period (2000–2018), the foundation’s grants totaled $5.5 billion, meaning 73 percent of the Buffett Foundation’s grant money went to anti-life groups.

To put that in perspective, Buffett’s billions are enough to pay for 8 million abortions according to data from the Guttmacher Institute, a pro-abortion think tank, at an average cost of roughly $500 per aborted fetus. That’s the entire population of Arizona or the equivalent of the people in nine states: Wyoming, New Hampshire, Maine, Montana, Delaware, North Dakota, South Dakota, Alaska, and Vermont.

It’s a stunning revelation from a foundation so shadowy that even its liberal admirers call it “secretive” and “publicity-shy.” But these are understatements. A recent (and favorable) profile by the Inside Philanthropy website commented on the difficulty in simply contacting the Buffett Foundation: “Trying to penetrate this place is like being a tourist asking around for the Mafia in Little Italy.”

The Buffett Foundation is one of the largest grantmaking foundations in America. In 2018, it gave away $624 million in grants, almost $100 million more than the Ford Foundation ($535 million) and enough to earn Warren Buffett infamy as the “King of Abortion” in pro-life circles. The president of Students for Life, a center-right college group, once deemed Buffett the “sugar daddy of the entire pro-abortion movement.”

His largesse has also won him acclaim in the pro-abortion camp. “Have an IUD? Thank Warren Buffett,” the Washington Post pronounced in 2015, referring to grants his foundation gave in the early 2000s to develop modern intrauterine devices for preventing pregnancies.

Even far-left Vox—whose writers often disparage the very existence of billionaires as “a policy failure”—grudgingly praises Buffett. “If you could snap your fingers and rid the world of billionaire philanthropists instantly,” it wrote in 2019 of Buffett’s philanthropy, “hundreds of millions of women worldwide would lose access to contraception.”

Yet the Buffett Foundation is almost nonexistent in the mainstream news. Although it’s been in operation since 1964, the group’s simple, out-of-date website offers information about scholarships for college freshmen in Nebraska (Buffett’s home state), nothing more: “The Susan Thompson Buffett Foundation responds to questions about college scholarships only. The Foundation does not respond to other inquiries.”

Perhaps left-leaning NPR summarized it best in 2006: “You mean you didn’t know Warren Buffett’s foundation has been funding abortion rights organizations? Well, that’s just the way the Buffetts wanted it.”

Although Warren Buffett is better known for his investment strategies than his support for population control, his involvement in pro-abortion activism predates the Roe v. Wade decision in 1973 and is largely attributable to Charles Munger, Buffett’s close friend and Number Two at Berkshire Hathaway. Munger, a Republican, described his views in a 2000 interview: “It was emotionally hard for me to become pro-choice because I do have reverence for human life, but when I thought through the consequences, I found it necessary to overrule that part of my nature.”

Munger convinced Buffett to join him in paying for the legal defense of Leon Belous, a California doctor convicted in 1967 of administering an illegal abortion; Belous’s appeal in that case led the California Supreme Court to declare the state’s ban on abortion unconstitutional in a 4-3 vote two years later. The Left still hails Belous as a hero for advancing the nation’s abortion laws, and his case was cited in the pro-choice appellants’ brief in Roe v. Wade four years later.

At the same time as the Belous case, Munger and Buffett organized a “church” run by a minister who had broken with his congregation over his own pro-abortion views. By the pair’s own admission, the so-called Ecumenical Fellowship was far from a religious institution; instead, it acted as a roving counselor on “family planning,” aiding women in obtaining abortions outside the United States in the late 1960s.

Warren and I were revolutionaries. We created a church that was used as an underground railroad. We supported the Clergy Counseling Service [a group of liberal ministers who arranged abortions for women outside the U.S.]. The minister running it was cashiered by his own church for helping women get abortions. First I tried to persuade the church to let him continue. That failed. I called Warren and asked him to help me establish our own church. That we did. For years this minister ran the thing. That was our contribution, trying to help so that society didn’t force women to give birth—to be held in a system [ecologist and overpopulation alarmist] Garrett Hardin called “mandatory motherhood.”

Although this “underground railroad” lost its purpose after abortion was legalized nationwide after Roe v. Wade, Munger continued his activism for years as a trustee and chief financial officer for the Los Angeles chapter of Planned Parenthood. He merged the Ecumenical Fellowship into the chapter and advised it on getting into the abortion business. Munger later bragged that “we were way ahead of the national office of Planned Parenthood in arranging abortions.”

In the next installment of “Terror of the Unborn,” trace Warren Buffett’s obsession with population control.