A Sit Down With a School Choice Champion: Empowering Parents 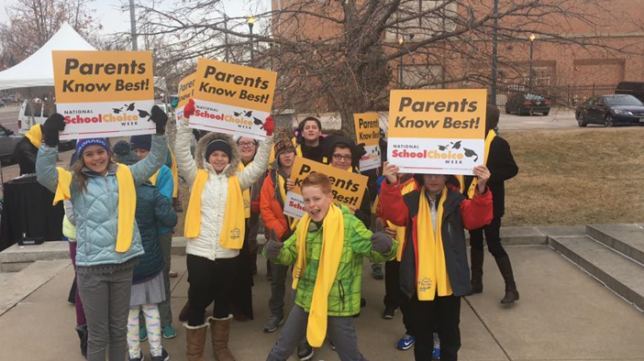 The People Promoting Parental Choice, and the Paths Toward It

Hartmann: So then you became quite heavily involved in school choice …

Schuck: When we were doing the position papers for my campaign and it came time to do K-12 education, it was sort of pretty simple. Results are disgraceful, unacceptable, and the problem was and is the way K-12 is organized, with all the power in the hands of the provider rather than the consumer. My solution was to turn the system on its head, as proposed by Milton Friedman, by empowering parents with vouchers. After losing the election, my wife, Joyce, and I decided that I should not seek public office again, but rather focus on advancing school choice.

One day I get a message from a guy named Bill Schambra at the Bradley Foundation in Milwaukee. I don’t have a clue who he is, or what Bradley is. He said, “I’ve been talking to Bob Coté and he told me you’re someone I should talk to.” Coté founded Step 13, a group that helps homeless addicts gain sobriety in Denver that was supported by both Bradley and me. Schambra asked, “Would you come out and speak to some philanthropy group about why you support Step 13?”

While I didn’t really know anything about Bradley or the group, my response was that if it’ll help Step 13, I’ll do it. Bill sent me a program for the whole event. I see John Walton was on a different panel. So I called back and said, “I’m reneging on my commitment unless you get me an audience with John Walton,” who was a big backer of choice nationally, of course. “If you can just get me 15 minutes with him, I’ll come and pay my own way.”

With Ted Forstmann, John had just put the Children’s Scholarship Fund together and I had been reading all about it, tens of thousands of kids in the program getting privately funded scholarships to go to the schools of their parents’ choice. John and I met and hit it off immediately.

Hartmann: What did you learn from John Walton?

Schuck: John thought and operated strategically, long-term, with laser-like focus, and operated with a heart as big as all outdoors. He was comfortable making moves despite the absence of any assurance of their success. He took heavy-duty body blows publicly for his efforts, but his courage, vision, and humanity kept him on course. He was an extraordinary man who, like Bill Daniels, provided me with mega-doses of inspiration.

Hartmann: Whom else did you meet along the way, and what happened with choice in Colorado?

Schuck: A little after I’d met John, Fritz Steiger called to tell me that John would like me to be on the board of CEO America—a great, great group of incredible human beings, including Howard Fuller, John Gardner, David Brennan, Peter Flanigan, Jim Leininger, Bill Oberndorf, Bob Woodson, Mike Joyce, and many others. I considered it the highlight of my life to just be there in the room with those fabulous guys.

Hartmann: But you and your allies stuck with the issue there nonetheless, albeit in a necessarily different way, didn’t you?

Schuck: When it became clear that there was no chance of seeing vouchers or tax credits in Colorado for the foreseeable future, Alex Cranberg and I just looked at each other and said, “Okay, let’s start privately funded programs.  He started the ACE Scholarships program in Denver and I started Parents Challenge in Colorado Springs.

When I put Parents Challenge together, I didn’t copy anybody else’s model. Some people, very protective of the status quo, accused me of being anti-public education. My reaction was, “That’s B.S.” I’ve got kids who went to public schools. My wife and I are public-school products. My son is a public-school teacher. I’m agnostic about what type of school parents choose, but I’m passionate about them making the choice.

When I ran for office, my primary platform plank was privatization. But I’m not in the education-privatization battle. I’m in the parental-empowerment battle. I want parents to choose what they think is best, not what I think is best. So we built a matrix that supports kids whose parents choose public schools, who can use the money for tutoring, transportation, activity fees, or for the purchase of a computer. If parents choose a private school, they can select any of the above plus use some of the money for tuition.

Parents Challenge is the only privately funded school-choice program in the country that helps support parents who choose public schools. That is important for two reasons. One, we truly empower parents by providing them with a full menu of school choices—traditional public, charter public, private, and homeschool—while all other programs limit choice to only private schools. This leads to the second reason, which is political. Most opponents of school choice accuse us of being anti-public schools, so by empowering low-income parents with funds they can use if their kids attend public schools, we neutralize claims that we are trying to destroy public education.

Specifically, for those parents choosing traditional or charter public schools, or who homeschool, grants up to $1,000 can be used to pay for a variety of academic-enhancement programs—such as tutoring, online programs or software, or a computer—or for education-related expenses like required uniforms or transportation. For those parents choosing private schools, scholarships up to $2,000 can be used, again, for all the aforementioned as well as for partial tuition payment.

Hartmann: Is Parents Challenge replicable and do you think it would be worth trying to replicate elsewhere?

Schuck: Those who want to bring school choice to their communities should be attracted to the Parents Challenge model, as they will not have to defend themselves against charges that they are anti-public school. In actuality, they become champions of public schools and can, like us, create partnerships with local public districts.

We conduct 15 to 20 parent-empowerment meetings throughout the school year. They are open to the general public, take place at a YMCA facility located in the community’s lowest socio-economic neighborhood, include free dinner and child care, and cover subjects the parents themselves identify each spring as being important to them and which they would like to better understand.

Parents Challenge solves the political problem that other choice programs encounter. We’ve put a manual together for those who are interested in pursuing a Parents Challenge program for their own community, and we’d love to share it.

In the final segment of his interview, Steve delivers wisdom for those pursuing philanthropy.