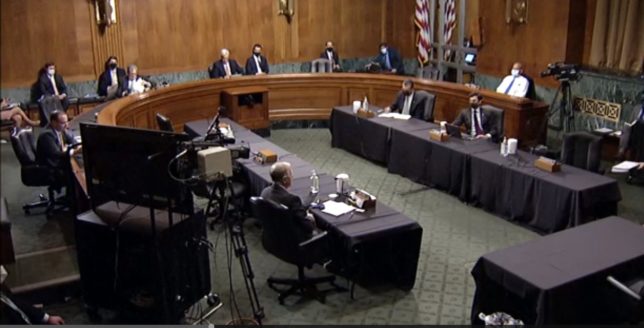 Yesterday, March 10, 2021, Scott Walter, president of the Capital Research Center, testified (virtually) before the Subcommittee on Federal Courts, Oversight, Agency Action and Federal Rights of the U.S. Senate Judiciary Committee. The following is his oral testimony. For the video of the hearing and his written statement, see the links below.

“What’s Wrong with the Supreme Court: The Big-Money Assault on Our Judiciary”

Chairman Whitehouse, Ranking Member Kennedy, distinguished members of the Subcommittee, thank you for the opportunity to speak, even though you may disagree with me. That’s a great privilege in these grim days of silencing and canceling of free speech, and I respect you for allowing it. I’m sure we all agree that Democracy means Disagreement.

At Capital Research Center, where I work, we study the sort of money flows discussed in Chairman Whitehouse’s Captured Courts report, and I’ve paid the Chairman the respect of reading every word of that report.

Despite its 18 references to “dark money,” I was surprised the report doesn’t define that term with any legal precision: Is it money in 501(c)(3) nonprofits? in (c)(4) nonprofits? (c)(6)s? in donor-advised funds? All these types of groups and more meet the report’s vague criterion of “funding for organizations and political activities that cannot be traced to actual donors.”

My preferred definition of “dark money” came from a witty man who said: Dark money is support for speech the Left wants to silence. That definition reveals how “dark money” conjures up a bogeyman. It shifts debate away from the substance of legal and political disputes to questions of money, and it implies that one’s opponents are somehow nefarious, just because they use the same funding arrangements everyone else does.

Before looking at those numbers, just consider: This very hearing is unthinkable without “dark money” flowing to everyone here: Members and witnesses and both political parties.

A decade ago, a liberal group coined “dark money” to refer only to 501(c)(4) nonprofits—the “independent expenditure” groups that increased after the Supreme Court’s Citizens United decision—but now the term’s used to encompass all nonprofits, donor-advised funds, and sometimes super PACs.

Those different groups have helped every Member of this committee get elected. Every single witness you’ve called today works at, and collaborates with, nonprofits that receive not-completely-disclosed support from donors on Left and Right. To paraphrase President Nixon, we are all dark-money users now.

Every single battle this committee engages in, every single political and judicial dispute that the Captured Courts report mentions—including judgeships, abortion, deregulation, forced union dues—every single one has groups that receive “dark money” and make arguments on both sides.

Yet this simple fact, well-known to everyone in this hearing, is never mentioned in Captured Courts, with one glancing exception when it says in passing that “dark money” is “now used by Republican and Democratic interests alike.”

Even there, the report claims “dark money” was “originally a Republican political device.” It gives no evidence for that amazing claim. Because it’s false.

The report says that in court battles, the Right is “fueled by hundreds of millions in special-interest dollars” whose sources are never fully disclosed. This money powers “a complex network of think tanks, law school centers, policy front groups, political campaign arms, and public relations shops.”

Mr. Chairman, you make wonderful charts of all those things, depicting the side you disagree with. I can make you charts of the identical things among your friends, and every chart I make will show more groups, fighting more years, with a lot more “dark money.”

To be fair, you may not realize how vast and rich your side is, because you’ve been misled by the partisan, one-sided research you rely on from folks like the Washington Post and the Center for Media & Democracy.

First, foundations. Your report cites the Bradley Foundation because it funds groups and amicus briefs you disagree with. Why did your report keep in the dark the Ford Foundation, whose funding dwarfs Bradley’s and whose influence on the courts began decades earlier? Ford’s influence has been enormous. Ford virtually invented the public interest law firm movement and helped get a reluctant Treasury Department to allow charitable status for those law firms, even though suing people hadn’t previously been seen as charitable. That tax law coup opened the floodgates for left-wing foundations to use “dark money” to fund lawsuits.

Second, public interest law firms: Your report criticizes the Pacific Legal Foundation, but it was founded years after Ford’s big expansion of such firms on your side.

Fourth, 501(c)(4) groups that campaign for and against judicial nominees. You target the Judicial Crisis Network, but today you invited People for the American Way. It’s also a (c)(4) and it invented public, multi-million-dollar nomination campaigns in 1987 when it smeared my friend Bob Bork with Gregory Peck ads.

Incidentally, People for the American Way was originally launched out of the Tides Foundation’s “dark money” empire, which has long funded it. Tides “dark money” also goes to the Center for Media & Democracy.

Now let’s look at the big numbers. If “dark money” means (c)(4) nonprofits, you and your friends have been ahead for half a decade. In the 2018 cycle, IssueOne reports the Left got 54% of the cycle’s $150 million. In the 2020 cycle, the Democratic Party’s presidential candidate won the “dark money” race by roughly $132 million to $22 million, according to the Center for Responsive Politics.

So, you and your friends have more groups, who’ve fought these battles much longer, and with much more “dark money.”

Permit me a note on fundraising. Every Member of this committee is a fundraiser. Is it nefarious when you raise funds from people who agree with your arguments? Of course not. Is it corrupt when you hire staff who’ve worked in other offices, or in outside groups? Of course not.

Mr. Chairman, the people that your report targets are no different from you and your friends.

They just have less money.