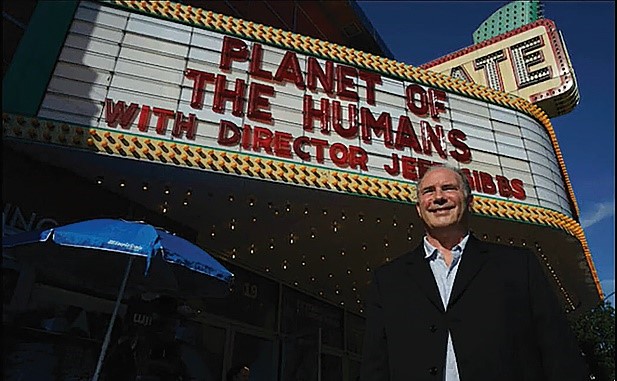 Jeff Gibbs’s answer to the problem is that those with “more,” therefore, must end up with less. Credit: Filmwax Radio. License: https://bit.ly/3fOh6Ni.
by Ken Braun

From Hugging Trees to Burning Trees

Gibbs saves the longest section of the film to reveal that the negligible renewable revolution has mostly been the work of biomass—the burning of trees, trash, and plants to produce electricity and ethanol. Data from the U.S. Department of Energy confirm his assertion. Biomass fed nearly 5 quadrillion BTUs into total U.S. energy consumption in 2019, versus the 2.7 quadrillion from wind and 1 quadrillion from solar.

And this is not just an American trend. The film asserts that nearly “70 percent” of the global “renewable” portfolio comes from biomass, not wind turbines and solar panels. That checks out with International Energy Agency data, which show that “biofuels and waste” made up 68.6 percent of the global renewable energy contribution in 2017, versus just 13.2 percent for wind and solar.

Even the supposed European renewable energy success stories (particularly the often celebrated one in Germany) are debunked by Planet of the Humans as merely biomass bait and switch scams perpetuated on a credulous base of left-leaning Americans. Here again, the International Energy Agency confirms that biofuels and waste comprised 65 percent of even the German renewable contribution in 2018. The film reveals that to meet their renewable targets the Europeans have been importing wood from the United States. (This was reported back in 2013 by the Economist).

About an hour into Planet of the Humans the movie portrays a march against natural gas drilling. Demonstrators wearing buttons showing support for left-leaning environmental organizations (most prominently the Sierra Club) are asked whether they consider the burning of wood to be a renewable fuel alterative. Unsurprisingly, these stereotypical “tree-huggers” are all hostile to the idea of mowing down forests for fuel.

Burning wood obviously releases lots of carbon dioxide. As the film points out, this is clear to anyone who has ever sat near a campfire. Yet critics of the movie have asserted that wood is still a carbon-neutral fuel because trees can be regrown.

True enough, as far as it goes, but that is not very far. Because even as it provides just a small minority share of U.S. and European fuel needs, wood is already not plentiful enough to go around. If somehow burning trees, trash, and jungles on a breathtakingly unimaginable scale became acceptable to the tree-hugging movement, Planet of the Humans shows it will never be the answer to win the battle to reduce carbon.

In the next installment of Planet of the Humans Review, learn about alternatives outside Moore’s framework.