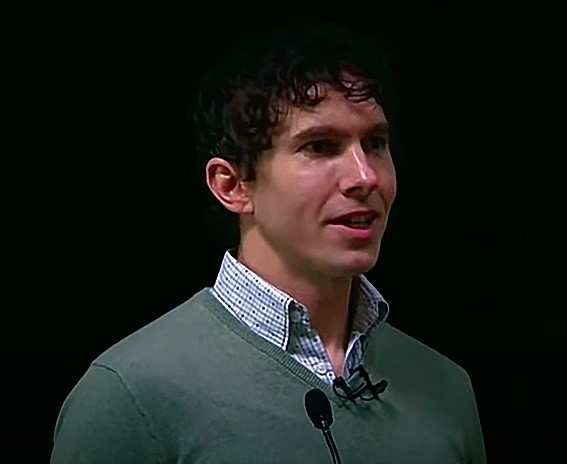 Ozzie Zehner, the co-producer of Planet of the Humans, is a visiting scholar and lecturer at Northwestern University and the University of California at Berkley. He is a reviewer for the Intergovernmental Panel on Climate Change (IPCC), and his specialty is energy policy. Credit: Talks at Google. License: https://bit.ly/3fNlY5y.
by Ken Braun

Planet of the Humans exposes a literally dirty secret: Producing solar panels and wind turbines requires a lot of energy (usually from fossil fuels), and they do not last very long or accomplish much.

The related concern revealed in the film is the insurmountable and critical problem of energy storage. Fossil fuels and nuclear fuel rods are natural batteries, having already stored dense packets of the energy. Similarly, from water falling from higher elevations and then running downhill, rivers have already stored the potential energy we unlock with hydroelectric dams.

But the wind and sun rarely make appearances when and where their energy is needed. And no manmade storage to save unnaturally captured wind and solar energy compares even remotely to the natural options. Without a massive leap in battery technology and cost competitiveness, even the best wind and solar capturing technology is destined for very limited usage.

Ozzie Zehner, the co-producer of Planet of the Humans, is a visiting scholar and lecturer at Northwestern University and the University of California at Berkley. He is a reviewer for the Intergovernmental Panel on Climate Change (IPCC), and his specialty is energy policy. Within the first half hour of the movie Zehner explains that solar panels are produced from “high quality quartz” and “high quality coal,” which are fused together in arc furnaces fired by voracious amounts of . . . yet more coal.

Zehner and Gibbs visit a much-celebrated mirrored solar array in the Mojave Desert. Then they go just down the road to the site of an earlier solar farm project, long since abandoned and producing no power at all. Zehner notes that, in one of the sunniest spots on the planet, solar arrays have been built and dismantled for four decades. The pair also show the desert trees destroyed to clear room for these experiments.

Several critics have claimed the film unfairly portrays solar energy by relying on only the performance of outdated technology. Report on the latest and greatest solar panels, these critics argue, and you’ll find a far better picture than what is presented in Planet of the Humans.

Ironically, this reinforces the point that solar is a throwaway technology with comparatively high development costs. In 2019, after all that quartz mining, arc furnace blasting, coal burning, and clearing trees for solar farms, solar contributed just a bit more than a measly 1 percent to American energy consumption. How much real estate must be ripped up and how many obsolete panels replaced before this technology hits just a low double-digit percentage of penetration in the nation’s total energy mix?

We are a long way off from that.

Swift obsolescence is also true of wind energy, which requires large land use that sometimes pollutes otherwise gorgeous vistas. In Planet of the Humans, an environmental activist tromps through a proposed wind farm in Vermont’s Green Mountains and informs the audience the turbines atop the metal monsters have a shelf life of just 20 years. This is confirmed by many sources such as Renewables First, a for-profit United Kingdom wind power provider.

All machines wear out, of course, including the turbines that create electricity from coal, natural gas, nuclear energy, and so forth. As with these more reliable options, the true measure of the value of wind power is how much energy is delivered to users in exchange for the ultimately disposable parts.

Have the spoiled landscapes and disposable turbines been worth it?

Not a dozen minutes into Planet of the Humans, Robert F. Kennedy Jr. is shown promoting his renewable investment group’s wind and solar power systems. Build their stuff, he claims, and you will have “free energy forever.” The film and the facts overwhelmingly demonstrate this boast to be as bankable as the faith healings conducted by a crooked televangelist.

In the next installment of Planet of the Humans Review, learn about role of biomass.