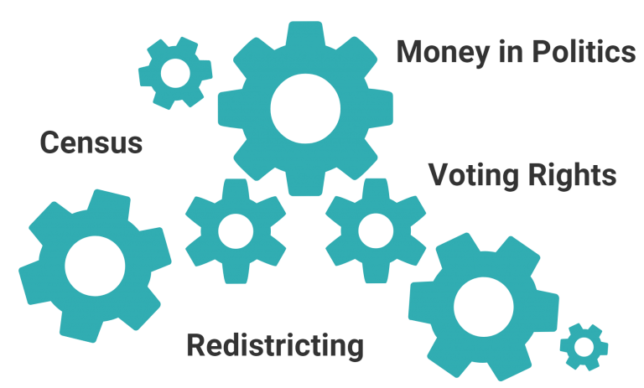 But Omidyar’s most political spending is channeled through the Democracy Fund and its “sister,” Democracy Fund Voice. The former is a member of the Funders Committee for Civic Participation, which convenes over 100 ostensibly nonpartisan funders with a shared partisan goal: Deliver a census and register voters favorable to the Democratic Party.

To give a sense of its resources, Funders Committee members altogether spent roughly $11.5 billion in 2020 alone, much of which was paid out as grants to politically active nonprofits. Representatives from the Democracy Fund, George Soros’s Open Society Foundations, the Ford Foundation, Rockefeller Brothers Fund, and union-aligned Amalgamated Foundation have sat on its advisory board. 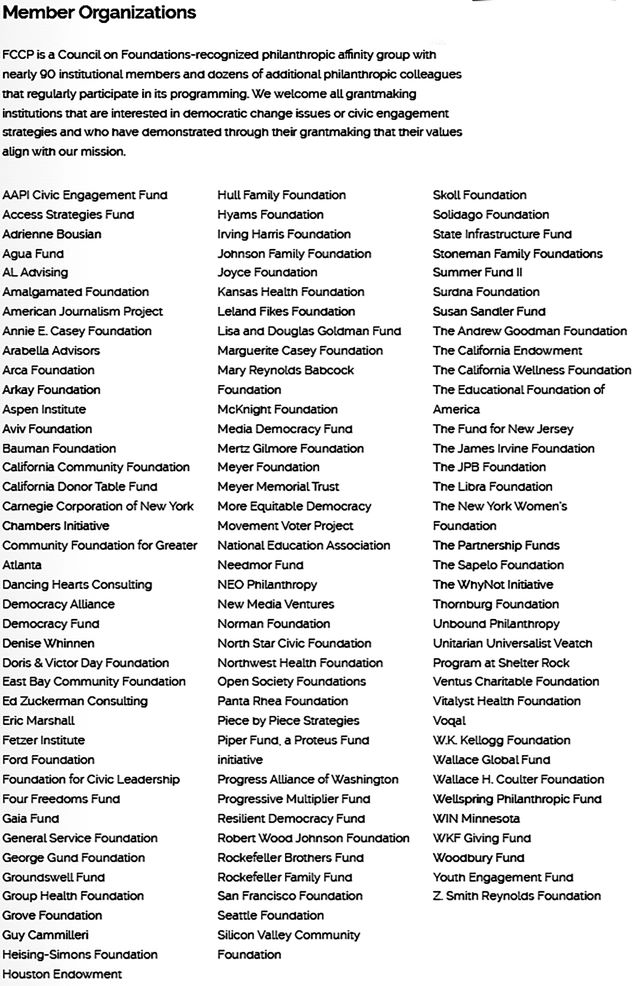 The Funders Committee isn’t a true organization, but rather a front for NEO Philanthropy, one of the Left’s largest and oldest pass-through nonprofits founded by Donald Ross, a close associate of arch-organizer Ralph Nader and the Public Interest Research Groups (PIRGs) of the late 1970s.

The Funders Committee isn’t shy about its goal of effecting “democratic change” by funding groups focused on potent “civic engagement strategies.” That strategy is based on an evolving “theory of impact” based on shuffling money to “democracy groups” advancing “structural reforms,” resulting in “power.”

An older rendition of the theory was even more stark—a flowchart for registering voters and getting them to the polls in order to “hold elected officials accountable” and “achieve policy impact.” The Funders Committee expanded the theory in 2017 to include “defend + expand voting rights.” 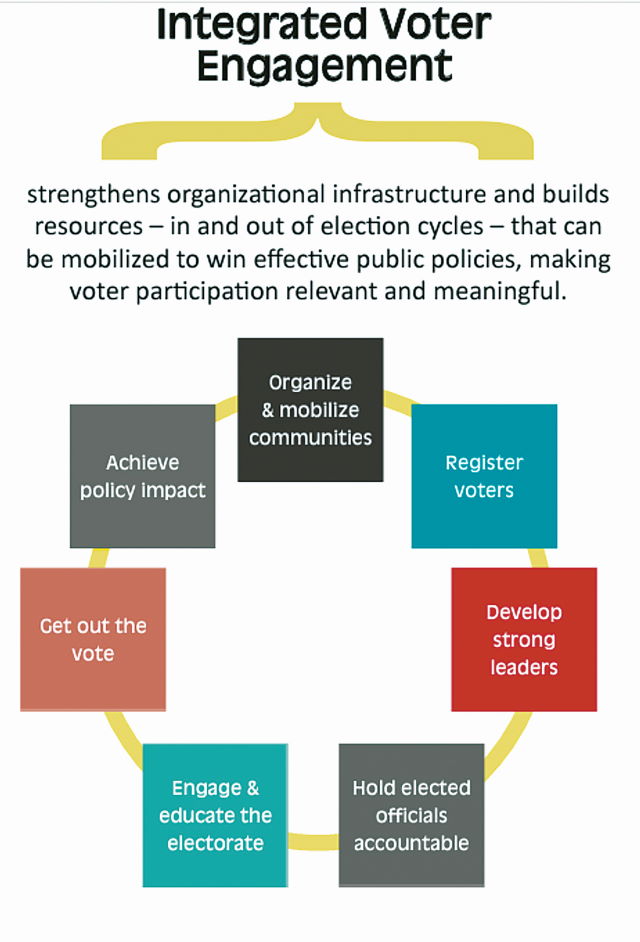 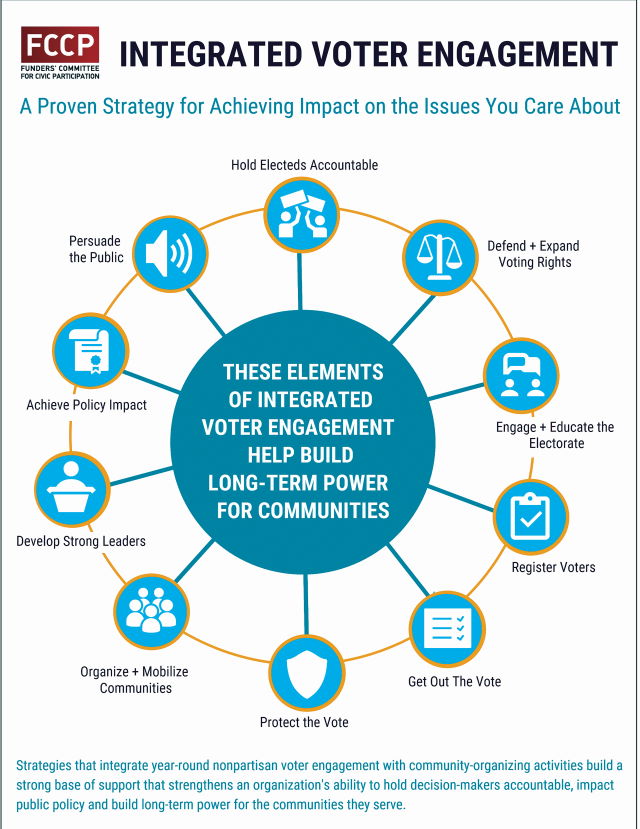 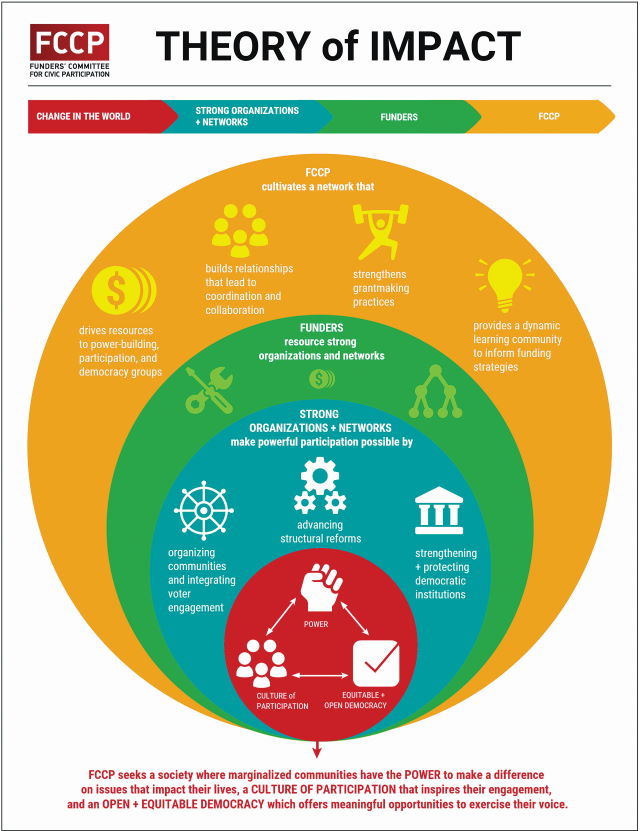 The Funders Committee has called its model one of “the most effective ways to increase voter turnout,” claiming multiple victories in the 2000s that helped turn Colorado from a red to purple state. This is all the more striking when one recalls that the bulk of the committee’s members are foundations barred from intervening in elections.

Much of the Funders Committee’s activities is hidden from the public eye, so little is known about how Omidyar’s Democracy Fund helped shape these activities. But we have some idea of his involvement.

The Democracy Fund was present in another 2021 panel on the “critical roles of organizing . . . in combating mis/disinformation” as well as the committee’s 2020 convening, where a Democracy Fund representative spoke at length on “voter engagement, voter registration, election protection, and election administration.”

Perhaps the committee’s most far-reaching work was in the 2020 Census project, which began in 2013. The resulting “Funders Census Initiative 2020” laid out three goals: improving census response rates, establishing state-based projects to “mobilize constituencies,” and expanding the committee’s “universe of [census] funders.” It even helped devise targeted, partisan messaging for ethnic minorities using allied activist groups such as the National Congress of American Indians and Color of Change. The latter ran messages claiming:

President Trump has actively worked to put down the Black vote and reduce outreach to Black communities for healthcare enrollment, and he will do the same when it comes to Black people taking part in the Census.

Why spend millions boosting turnout for the 2020 Census? The redistricting process follows each census, in which states redraw their congressional and legislative districts. The census determines how many congressional seats each state receives, which also determines how many votes it receives in the Electoral College. By boosting turnout in places like California and New York the Funders Committee helped offset the number of Democratic seats lost to more conservative states like Texas and Florida.

And the apparently strategy worked. Although many blue states lost congressional seats in 2022, the Census Bureau admitted in June—after the states had finalized their new maps—that is miscounted 14 states: Overcounting the Democratic strongholds of Minnesota, New York, Hawaii, and Massachusetts while undercounting the Republican-run states of Mississippi, Texas, Florida, Arkansas, and Tennessee. Illinois was the sole exception. Whoops.

In the next installment, the Democracy Alliance is the Left’s most potent strategy gathering.